The toll of Clostridium difficile, or C-diff — a bacterium that causes a dangerous form of diarrhea and is the most common cause of hospital-acquired infections in the United States — is much higher than previously believed, according to a study published Wednesday by the Centers for Disease Control and Prevention (CDC).

Using data collected from 10 regions of the country — including the central Minnesota counties of Stearns, Benton, Todd and Morrison — the study found that C-diff caused about 453,000 infections in the United States in 2011. Health officials had previously linked the bacterium to an estimated 240,000 to 333,000 infections each year.

The new study also estimated that 29,000 people died within 30 days of being diagnosed with C-diff in 2011. Of those deaths, about 15,000 were “directly attributable” to the infection.

More than 80 percent of all the deaths associated with C-diff in the study were among people aged 65 years or older.

These findings are troubling. C-diff can be very difficult to treat, mainly because strains of the bacterium have become resistant to standard antibiotics. To get rid of the infection, patients often have to have part of their colon removed. Even then, the disease frequently recurs — in 20 percent of patients, according to the new study.

Many C-diff infections could have been prevented with more appropriate use of antibiotics in both hospitals and other health-care settings, CDC officials note. Previous studies have suggested that 30 to 50 percent of antibiotics prescribed in U.S. hospitals are unnecessary or incorrect. The overuse and misuse of antibiotics contribute to C-diff illnesses by altering or killing off beneficial bacteria in the intestines that help protect against the C-diff bacterium. This suppression of beneficial bacteria can last for weeks or months, leaving people vulnerable to picking up the infection from contaminated surfaces long after they have stopped taking the antibiotics — and left the hospital.

In a released statement, Dr. Stacy Holzbauer, an epidemiologist at the Minnesota Department of Health (MDH) and a co-author of the study, said Minnesota’s higher rate was the result of a more sensitive method of testing for the disease and the fact that the four counties were more rural than the other sites in the study. Studies conducted elsewhere in the world, she pointed out, have also demonstrated higher rates of community-associated infections in rural areas. 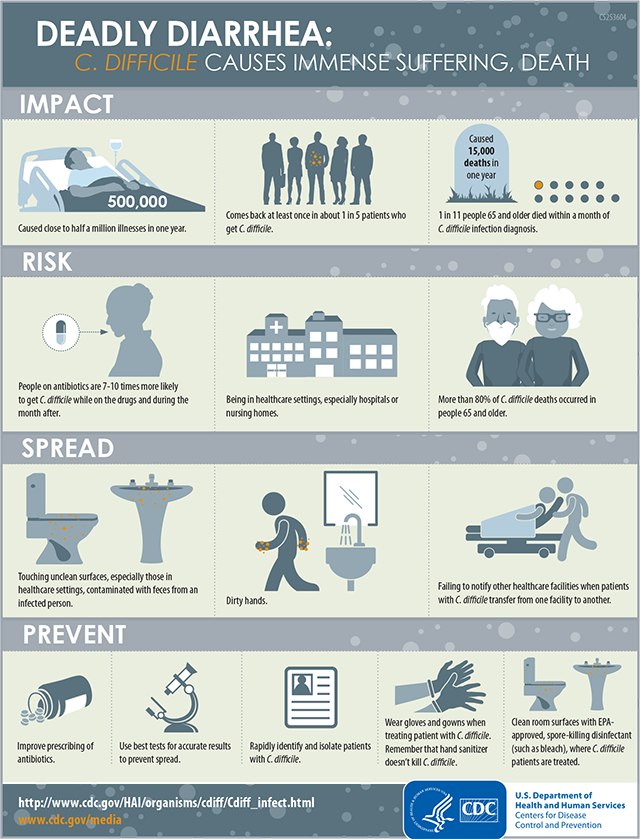 What patients can do

The rest of us need to take some responsibility, however, and not demand antibiotics when our health-care providers say they are unnecessary.

The CDC study was published in the New England Journal of Medicine.