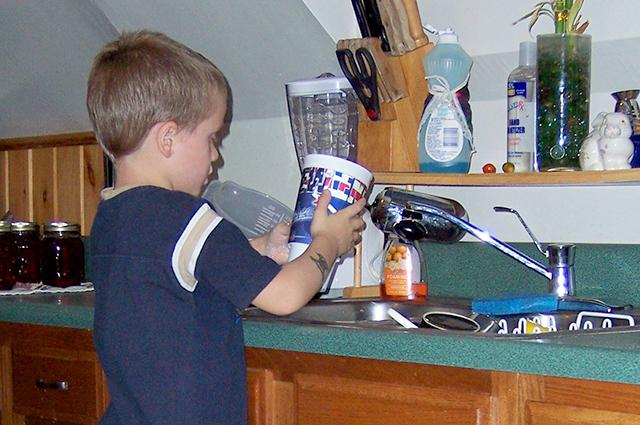 Creative Commons/lori05871
The protective association between hand dishwashing and allergies was especially strong if the children also ate fermented food or if their parents bought food directly from farms.

An intriguing new study from Sweden offers yet more evidence in support of the “hygiene hypothesis” — the idea that growing up in a too-clean home may put children at greater risk of developing allergies because they are not being routinely exposed to commonplace bacteria and other micro-organisms.

The protective association between hand dishwashing and allergies was especially strong if the children also ate fermented food or if their parents bought food directly from farms.

“We speculate that these lifestyle factors reduce allergy development via increased or more diverse microbial exposure, stimulating the immune system to develop in a more tolerant direction,” conclude the authors of the study.

The findings were published online Monday in the journal Pediatrics.

For the study, the researchers analyzed survey data collected in 2007 from the parents of 1,029 Swedish children aged 7 and 8. Some of the questions on the survey related to dietary, eating and kitchen habits; others had to do with the children’s health, specifically their history of allergic diseases and conditions.

About 12 percent of the parents said they usually washed their family’s dishes by hand, while 84 percent said they used a dishwashing machine.

Of the children in the homes where the dishes were hand-washed, 23 percent had a history of eczema, a skin condition usually triggered by an overactive response by the body’s immune system to an irritant (allergen). That compared to 38 percent of the children whose parents used a dishwasher.

A similar pattern was found in regards to seasonal allergies, with 12 percent of the children in the machine-dishwashing homes and 10 percent in the hand-dishwashing homes having been diagnosed with that particular allergic condition, but the difference was not statistically significant.

Yet, when the researchers adjusted for lifestyle, socioeconomic and other factors (such as daycare attendance, parental history of allergies and pets kept in the home), they found that “the associations between hand dishwashing and allergic diseases remain statistically significant for eczema and total allergy, whereas a borderline significance is seen for asthma.”

Of course, this study is an observational one, which means its findings can’t be used to draw a direct causal link between dishwashing practices and the risk of developing allergic conditions.

In fact, that mechanism is only one possible explanation of the findings, say the study’s authors. “Lifestyle factors other than hand dishwashing practices may [also] be important,” they explain. “For example, overcrowded housing, low socioeconomic status, and immigrant status are all factors that have been associated with reduced allergy levels in various studies, and these factors may also be associated with dishwashing practices.”

Furthermore, even if the hygiene hypothesis turns out to be true (and so far it’s only a working theory), it’s unlikely to be a factor in all cases of childhood eczema, asthma and seasonal allergies. Such autoimmune diseases are known to have strong genetic as well as environmental components.

So don’t get rid of your dishwasher — yet. And although the hygiene hypothesis suggests that you can, perhaps, take a little more relaxing attitude toward your housekeeping chores, make sure you keep your kitchen clean and free of illness-inducing pathogens, especially salmonella, Listeria, E. coli, yeast and mold.

The new study is available in full on Pediatrics’ website.