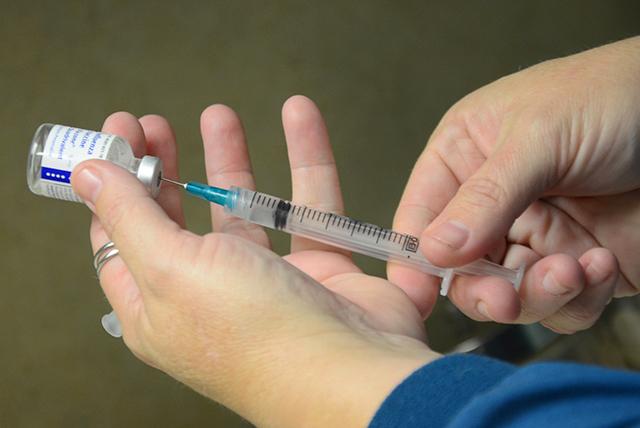 Creative Commons/KOMUnews
In his article, psychologist Tom Stafford describes several psychological factors that are at play with parents refusing or delaying the vaccination of their children.

In an article published Thursday in the online publication The Conversation, British psychologist Tom Stafford explains why presenting scientific facts to parents wary of vaccines will make them less likely to get their children vaccinated against measles and other childhood diseases.

It has a lot to do with a psychological process that affects (or afflicts) all of us: biased assimilation.

“We all regard new information in the light of what we already believe,” Stafford writes (with British spellings and punctuation). “In line with this, one study showed that climate sceptics rated newspaper editorials supporting the reality of climate change as less persuasive and less reliable than non-sceptics. Some studies have even shown that people can react to information which is meant to persuade them out of their beliefs by becoming more hardline — the exact opposite of the persuasive intent.”

“For topics such as climate change or vaccine safety, this can mean that a little scientific education gives you more ways of disagreeing with new information that don’t fit your existing beliefs,” he adds. “So we shouldn’t expect anti-vaxxers to be easily converted by throwing scientific facts about vaccination at them. They are likely to have their own interpretation of the facts.”

A lack of trust

Nor does the expertise of the person providing the information matter. In a study Stafford published a few years ago, he looked at which sources of information people were most likely to trust on the issue of whether a development was going to pollute their neighborhood. He found that “how expert a particular group of people was perceived to be — government, scientists or journalists, say — was a poor predictor of how much they were trusted on the issue. Instead, what was critical was how much they were perceived to have the public’s interests at heart. Groups of people who were perceived to want to act in line with our respondents’ best interests — such as friends and family — were highly trusted, even if their expertise on the issue of pollution was judged as poor.”

“By implication,” he adds, “we might expect anti-vaxxers to have friends who are also anti-vaxxers (and so reinforce their mistaken beliefs) and to correspondingly have a low belief that pro-vaccine messengers such as scientists, government agencies and journalists have their best interests at heart. The corollary is that no amount of information from these sources — and no matter how persuasive to you and me — will convert anti-vaxxers who have different beliefs about how trustworthy the medical establishment is.”

As Stafford also explains, once a medical myth gets established in people’s minds, it’s very difficult to dislodge it.

“The vaccination issue provides a sobering example of this,” he writes. “A single discredited study from 1998 claimed a link between autism and the MMR jab, fuelling the recent distrust of vaccines. No matter how many times we repeat that ‘the MMR vaccine doesn’t cause autism’, the link between the two is reinforced in people’s perceptions. To avoid reinforcing a myth, you need to provide a plausible alternative — the obvious one here is to replace the negative message ‘MMR vaccine doesn’t cause autism’, with a positive one. Perhaps ‘the MMR vaccine protects your child from dangerous diseases’.”

In his article, Stafford describes several other psychological factors that are at play with parents refusing or delaying the vaccination of their children, including “the rational selfishness of avoiding risk, or even the discomfort of a momentary jab, by gambling that the herd immunity of everyone else will be enough to protect your child.”

‘Wrong, but not irrational’

He ends the article with some advice for those of us who may find ourselves frustrated by parents who harbor seemingly irrational fears about childhood vaccines:

Many who seek to persuade anti-vaxxers view the issue as a simple one of scientific education. Anti-vaxxers have mistaken the basic facts, the argument goes, so they need to be corrected. This is likely to be ineffective. Anti-vaxxers may be wrong, but don’t call them irrational.

Rather than lacking scientific facts, they lack a trust in the establishments which produce and disseminate science. If you meet an anti-vaxxer, you might have more luck persuading them by trying to explain how you think science works and why you’ve put your trust in what you’ve been told, rather than dismissing their beliefs as irrational.

You can read Stafford articles on The Conversation’s website. He’s also posted it on his Mindhacks blog.