Americans’ exposure to secondhand smoke has dropped dramatically — by 50 percent — over the past decade, thanks primarily to state laws prohibiting smoking at work sites and other public places and to individuals smoking less in their homes, according to a new study from the Centers for Disease Control and Prevention (CDC).

In 1999, one in two nonsmokers were exposed to secondhand smoke, but by 2012, only one in four were exposed, the CDC analysis found. Exposure was assessed by testing for cotinine, a marker of nicotine, in blood samples taken voluntarily from people participating annually in the National Health and Nutrition Examination Survey.

“It is good news,” said Robert Moffitt, spokesperson for the American Lung Association in Minnesota, in a phone interview Wednesday. “It really shows the progress that we’ve made in a relatively short time.”

No exposure is safe

Of course, as Moffitt and the CDC researchers point out, no amount of secondhand smoke exposure — which occurs when nonsmokers breathe in smoke exhaled by smokers or from burning tobacco products — is considered safe. Secondhand smoke has been linked to sudden infant death syndrome (SIDS), asthma attacks and respiratory and ear infections in infants and children, as well as heart disease, stroke, and lung cancer in adults.

Studies suggest that secondhand smoke is responsible for 400 deaths among infants and 41,000 deaths among nonsmoking adults in the United States each year.

And although the share of Americans breathing in the toxic fumes of secondhand smoke may have fallen by half in recent years, the one-in-four statistic still means that 58 million Americans are being regularly exposed to it.

Groups most at risk

Some groups remain at higher risk of secondhand smoke exposure than others, the CDC report found. During 2012, the highest exposure rates were among children aged 3 to 11 (40 percent), African-Americans (47 percent), people living below the poverty level (43 percent) and people living in rental housing (37 percent).

The higher rate among African-Americans may be in part from their increased risk of workplace exposure to secondhand smoke, the CDC study notes. About 26 percent of black nonsmokers in the study worked in environments where smoking was permitted, compared to 18 percent of white nonsmokers.

Black children aged 3 to 11 had particularly high levels of exposure to secondhand smoke: 67 percent. Among white children, the exposure rate was 37 percent, and among Hispanic children, it was 30 percent. 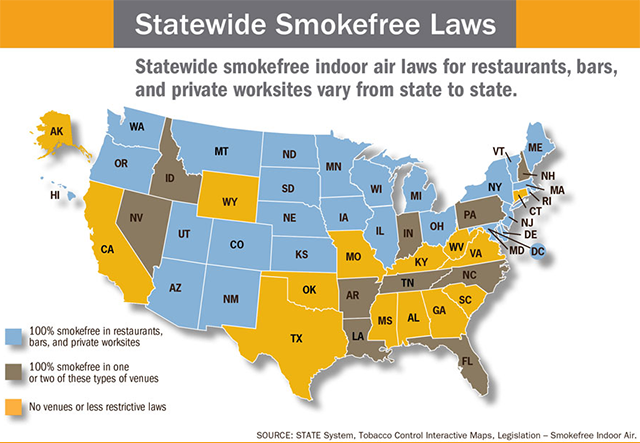 As the CDC researchers point out, the home is the primary source of secondhand smoke exposure for children. Although many people have declared their homes smoke-free, many others haven’t. In addition, about 80 million (one in four) Americans live in multi-unit housing where they — and their children — can be exposed to unwanted smoke that seeps in from neighboring units or that exists in common areas.

“When seven out of 10 African-American children and two out of five children overall are exposed to secondhand smoke, that shows we have a lot of work yet to do,” said Moffitt.

The CDC cites several possible reasons for the U.S.’s dramatic decline in secondhand smoke exposure. At the top of the list are the 700 or so towns and cities that have implemented smoke-free laws over the past 25 years and the 26 states and the District of Columbia that have banned smoking in public places since 2002.

“Almost half (49.3%) of U.S. residents are currently covered by comprehensive smoke-free laws at the state or local level,” the report points out.

Other reasons for the decline in secondhand smoke exposure include the increasing number of families voluntarily creating a smoke-free environment in their homes (more than 83 percent of all U.S. households at last count), the fall in the social acceptability of smoking (particularly around nonsmokers), and the fact that fewer Americans are now smoking cigarettes.

‘Time to finish the job’

Minnesota has been a national leader in efforts to reduce people’s exposure to secondhand smoke and the health risks that come with it. For example, Minnesota was the first state in the nation to establish non-smoking areas in restaurants — back in the 1970s, said Moffitt.

And in 2007, the state passed the “Freedom to Breathe” legislation, which banned smoking in most workplaces and other public indoor spaces.

The CDC report is evidence that such laws work, said Moffitt.

“It is an amazing move forward, and it shows we’re halfway there,” he said. “Now it’s time to finish the job and make sure that everyone has a safe workplace and a safe home.”

The CDC report was published Tuesday in Morbidity and Mortality Weekly Report, where you can read it in full. For information on how you can protect the air in your home, whether you rent or own, go to the American Lung Association website.