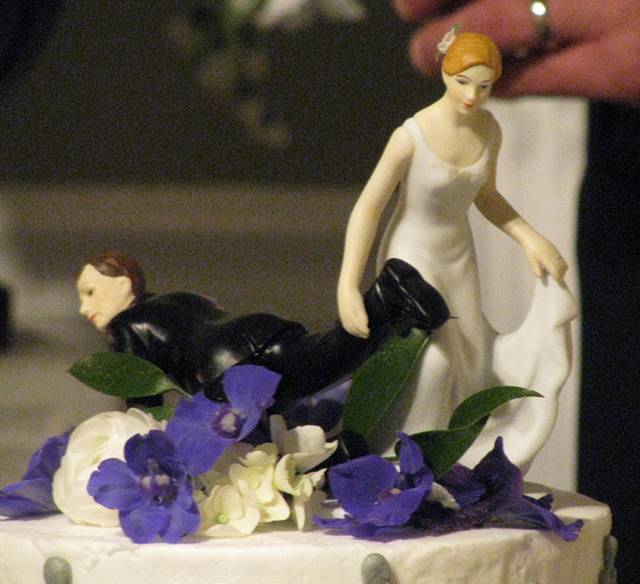 A number of studies have found that married people (especially married men) tend to be healthier than unmarried people.

But very little is known about how a chronic illness in one marriage partner affects the health — indeed, the survival — of marriages.

In other words, just how much do couples honor that traditional marriage vow of “in sickness or in health”?

A study published in the March issue of the Journal of Health and Social Behavior investigated that question among middle-aged American couples. Its findings offer less-than-comforting news — for women.

For the study, Amelia Karraker of Iowa State University and Kenzie Latham of Indiana University-Purdue University analyzed data collected between 1992 and 2010 from the large, ongoing Health and Retirement Study. The researchers randomly selected 2,701 marriages from the data. To be included, at least one spouse had to be 51 years old at the start of the study, and neither spouse could have an existing serious physical illness.

Of the marriages analyzed, 32 percent ended in divorce and 24 percent ended in widowhood. Karraker and Latham then dug further into the data to see how often the development of a major chronic illness — specifically cancer, heart disease, lung disease or stroke — preceded both those outcomes.

They found a small but statistically significant association between illness and divorce. Marriages in which the wife became chronically ill were 6 percent more likely to end in divorce than those in which the wife remained healthy.

The onset of a chronic illness in the husband, however, was not associated with an increased probability of divorce.

The study also found, unsurprisingly, that the development of a chronic illness was associated with a higher risk of widowhood. The risk was the about same, however, for both men and women.

This study comes with several major limitations, of course. To begin with, it cannot prove a direct causative link. That means its results do not prove that men are more likely than women to bail out of a marriage when their spouse becomes seriously ill.

In addition, although the researchers adjusted their final data analysis for certain potentially confounding factors, such as education and socioeconomic status, other ones not measured in the study may have influenced the results, including how much social support the couples had, the severity and prognosis of the ailing spouse’s illness, and even the individual personalities of the husbands and wives (how well they deal with stress, for example).

Furthermore, the study was not designed to determine who — the husband or the wife — initiated the divorce. Or why they did so. It’s quite possible that many of the women who became ill ended their marriages. Indeed, as Karraker and Latham point out in their study, two-thirds of all divorces in the United States are initiated by women.

Other research has shown that women are often dissatisfied with the caregiving they receive from their husbands — perhaps because men, historically, have tended to be less comfortable in the caregiving role.

“Life or death experiences may cause people to re-evaluate what’s important in their lives,” said Karraker in a statement released with the study. “It could be that women are saying, ‘You’re doing a bad job of caring for me. I’m not happy with this, or I wasn’t happy with the relationship to begin with, and I’d rather be alone than be in a bad marriage.’”

On the other hand, as Karraker and Latham note in their study, men may “be more likely to initiate divorce following [a] wife’s illness because men have more options for new partnerships than do women.”

The study’s findings illustrate the potential stress an illness can put on relationships and underscore the need for greater support services — not just for people who are ill, but also for their caregivers.

“I think the research shows the potential vulnerabilities for people in society who are sick,” explained Karraker in the released statement. “There is an elevated risk for depression with illness and now you’re also at risk for divorce. People in poor health may have less access to beneficial social relationships, which in turn can compromise their health further.”

You’ll find an abstract of the study on the Journal of Health and Social Behavior’s website. The full study, which was supported by a grant from the National Institute on Aging, is behind a paywall.