The rankings use a variety of sources to compile county-level data on 35 measurements, including quality of life, health behaviors, medical care, and social and economic factors. Each county receives two scores: one for health outcomes (an indication of the current health of the county’s population) and another for health factors (an estimate of how healthy that population will be in the future).

For the first time in the project’s six-year history, the rankings include income inequality as one of the health factors.

Minnesota scored lower than the national average, however, on two health behaviors: the percentage of adults who admit to binge drinking (19 percent vs. 16 percent nationally) and the number of newly diagnosed chlamydia cases (336 per 100,000 population vs. 291 per 100,000 nationally). The state also has more air pollution and severe housing problems (such as high housing costs and lack of plumbing) than the national average.

In the social and economic category, Minnesota scored better than the national average on all but two health factors: the percentage of ninth-graders who go on to graduate from high school within four years (78 percent in Minnesota vs. 85 percent nationally) and the rate of violent crime (229 offenses per 100,000 population in Minnesota vs. 199 nationally).

The lower rankings in the northern counties are driven in large part by socioeconomic factors, such as higher unemployment and more child poverty, but behavioral factors, such as physical inactivity and obesity, are also involved.

The county rankings “help illustrate how an individual’s health status is easier to predict by where they live than their use of medical treatment,” said Minnesota Commissioner of Health Dr. Ed Ehlinger in a e-mail statement sent to MinnPost. “It highlights the compelx ways community factors such as economic opportunity, education, housing, and transportation shape the health of communities and individuals.”

“Those rankings can help advance the conversation between communities and local health departments about taking action to improve the health of their population,” he added.

Here are the healthiest and unhealthiest Minnesota counties in terms of health outcomes: 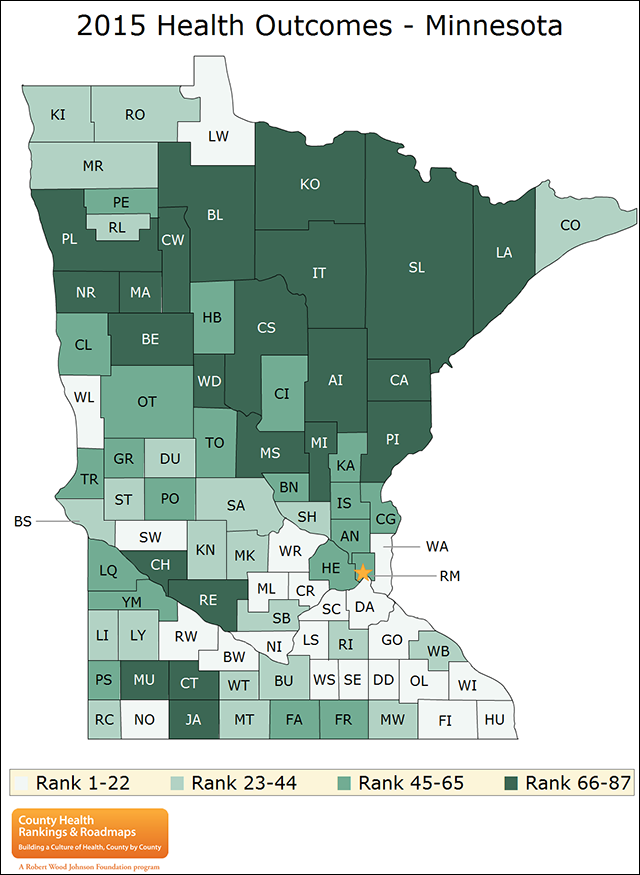 And here are the healthiest and unhealthiest counties in terms of health factors: 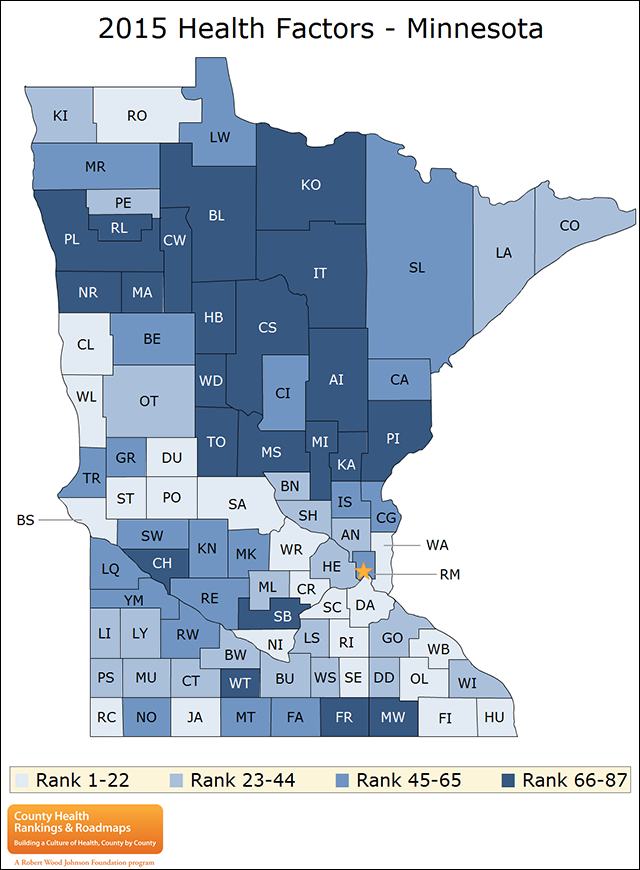 Among Minnesota’s three most populous counties, Dakota scored the best — 19th on health outcomes and 6th on health factors — followed by Hennepin (46th and 28th) and Ramsey (63rd and 58th).

You can explore each county in detail through the County Health Rankings interactive website.