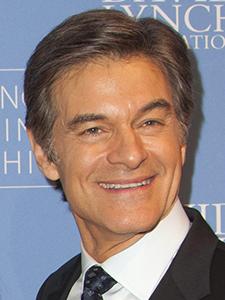 Oz is undoubtedly the United States’ most famous and influential doctor. Each day, his TV show — “The Doctor Oz Show” — reaches an average of 4 million viewers in 118 countries. But that’s only part of his media empire, which also includes a magazine (The Good Life), many books, regular radio segments, a popular website and millions of followers on Facebook, Twitter and other social media.

As Beluz describes in her article, Oz began his career as a highly skilled and respected heart surgeon who also dabbled in alternative medicine. But once he began appearing on “The Oprah Winfrey Show” in 2004 and was dubbed “America’s Doctor” (a moniker he soon trademarked), he began to embrace alternative medicine more tightly, “even if it meant,” writes Beluz, “slowly shifting further away from science and closer to wizardry.”

Oz has promoted a host of alternative “medical” practices that have been shown in evidence-based studies to have no impact on the human body beyond the placebo effect, such as homeopathy and Reiki. (These practices also defy the basic laws of science.)

He’s also had guests on his TV show that have made dubious health claims without revealing that they are paid spokespeople for products related to those claims. Tennis star Monica Seles, for example, went on his show to talk about binge eating, but failed to mention that she was a paid spokesperson for Shire Phramaceuticals, a drug company that markets a drug for the treatment of that condition.

Oz also famously (or infamously) invited onto “The Dr. Oz Show” a so-called doctor (his naturopathic medical degree is apparently fake) to discuss research the man said showed supplements made with green coffee beans (and marketed by the man’s dietary supplement company) could help people lose weight — research that has been since exposed as fraudulent.

In addition, “at the height of the Ebola panic last year, Oz suggested the virus could go airborne — even though there was universal agreement among virologists that the pathogens have never behaved that way,” writes Beluz.

‘An egregious lack of integrity’

Despite his promotion of dubious and often outright ridiculous medical practices and products, Oz has kept, as Beluz notes, his medical license and faculty position at Columbia University, where he is vice chairman of the university’s department of surgery and performs about 100 surgeries a year.

Last week, a group of physicians from various institutions around the country, including Stanford University, the University of North Carolina and the American Council on Science and Health in New York City, wrote a letter to Columbia University, asking it to sever its ties with Oz.

“Dr. Oz has repeatedly shown disdain for science and for evidence-based medicine, as well as baseless and relentless opposition to the genetic engineering of food crops,” states the letter. “Worst of all, he has manifested an egregious lack of integrity by promoting quack treatments and cures in the interest of personal financial gain.”

The university responded with a statement that said it was “committed to the principle of academic freedom and to upholding faculty members’ freedom of expression for statements they make in public discussion.” As for Dr. Oz, the New York Times reported this morning that he plans to respond to the recent criticism in a segment of his show on Thursday.

Tapping in to the public’s need

As Beluz stresses throughout her article, “the making of Dr. Oz says more about America’s approach to health than it does about its most famous doctor.”

Dr. Oz, early in his career, identified that something was missing from mainstream medicine: that people longed for more than the cold, scientific approach. They wanted, in my mother’s words, “hope and renewed faith.” It’s in our human nature to desire those things. We want to be heard. We want to be healed — not only physically but emotionally. Health care in America doesn’t address this longing, and it certainly doesn’t alleviate the deep anxieties many Americans have about the limitations and flaws inherent in medicine and science.

Oz was one of the first highly credentialed doctors to tap into this longing, a longing that far-less-educated quacks had seized on for decades. From the TV faith healer Peter Popoff to the “psychic surgeon” John of God, from star fitness gurus to celebrity diet peddlers, people have long been profiting off our willingness to buy into miracles — especially when they make us feel good, provide simple answers to our most vexing health issues, and offer alternatives to Big Pharma.

Oz arrived on the national stage at a time when the American public was beginning to accept the role some nontraditional therapies, such as yoga and meditation, have in promoting health. The tragedy of Dr. Oz is that he was perfectly placed to help people navigate this tension in medicine — acknowledging their longing and their suffering, studying viable alternative therapies, and helping people understand and appreciate all that science has to offer.

But Oz hasn’t done that. Instead, he seized on the surging interest in alternative medicine, embraced an “open-minded” approach to healthcare, and replaced science with quackery.

Tim Caulfield, a health law professor and author of  Is Gwyneth Paltrow Wrong About Everything?, pointed out that this pattern isn’t common in other disciplines: “We don’t adopt this ‘open-minded’ approach in other realms of science — physics or engineering or chemistry.” Yet even the most reasonable among us — Oz’s Columbia colleagues, my dear mom — are vulnerable to magical thinking when it comes to the desire for health and healing. Oz knew that weakness, and he exploited it.

You can read Beluz’s article on the Vox website.