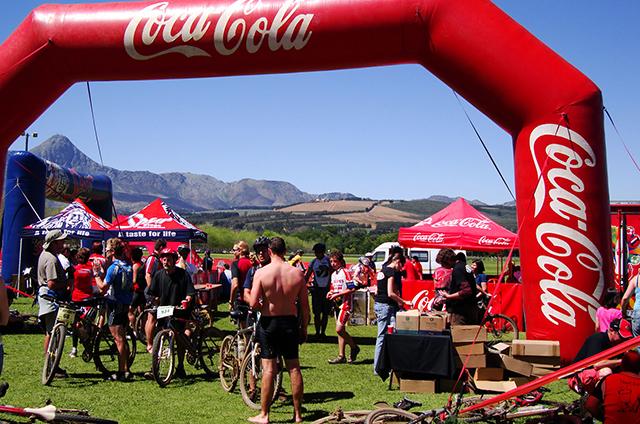 CC/Flickr/Warren Rohner
From the editorial: “[Coca Cola] associate[s] their products with sport, suggesting it is ok to consume their drinks as long as you exercise… However, science tells us this is misleading and wrong.”

In their new “Mixify” campaign, Pepsi, Dr. Pepper and Coke — the three biggest soft drink companies in the United States — are trying to save the shrinking market for their high-calorie products by urging teens to balance the consumption of sodas with exercise.

“It’s classic PR, like fast food chains giving away pedometers,” Sonya Hauser, an assistant professor of nutrition at the Sage Colleges in upstate New York, told the Albany Times-Union earlier this month. “They’ve been vilified with the obesity epidemic. They want to change perception by getting you to think all you have to do is exercise more, not eat less of their stuff.”

But it’s a cynical message. For, as Hauser points out, to burn off the 200 calories in a 20-ounce soda would take an hour of running.

“Honestly,” she told the Times-Union reporter, “how many teens would do that to burn the roughly 16 teaspoons of sugar they just consumed? Not many.”

An editorial published last week in the British Journal of Sport Medicine is even more blunt.

“It is time to wind back the harms caused by the junk food industry’s Public Relations machinery,” it says. “Let us bust the myth of physical inactivity and obesity. You cannot outrun a bad diet.”

The editorial — written by Dr. Aseem Malhotra, a cardiologist and consultant to the Academy of Medical Royal Colleges in London; Tim Noakes, a professor of exercise and sports science at the University of Cape Town in South Africa; and Dr. Stephen Phinney, professor emeritus of medicine at the University of California Davis — points to evidence that shows that while obesity rates have skyrocketed in Western countries over the past 30 years, physical activity levels have remained essentially the same.

In fact, they say, the research shows that “poor diet now generates more disease than physical inactivity, alcohol and smoking combined” and that up to 40 percent of adults with a normal body mass index (BMI) have conditions, such as high blood pressure, heart disease or non-alcohol-related fatty liver disease, associated with obesity.

“This is little appreciated by scientists, doctors, media writers and policymakers, despite the extensive scientific literature on the vulnerability of all ages and all sizes to lifestyle-related diseases,” the three experts write in their editorial. “Instead, members of the public are drowned by an unhelpful message about maintaining a ‘healthy weight’ through calorie counting, and many still wrongly believe that obesity is entirely due to lack of exercise.”

Of course, the message that everybody — including teens — need to exercise is an important one. Physical activity confers all sorts of physical and mental health benefits, including a lower risk of developing heart disease, type 2 diabetes, certain cancers, dementia and depression.

But it doesn’t promote weight loss, the editorial points out.

The food industry’s public relations machinery, “which uses tactics chillingly similar to those of big tobacco,” is largely responsible for the public’s confusion about diet, exercise and weight, Malhotra, Noakes and Phinney write.

As an example, they point to Coca Cola, which spent $3.3 billion on advertising in 2013, much of it aimed at pushing the message that “all calories count.”

“They associate their products with sport, suggesting it is ok to consume their drinks as long as you exercise,” the three experts write. “However, science tells us this is misleading and wrong. It is where the calories comes from that is crucial. Sugar calories promote fat storage and hunger. Fat calories induce fullness or ‘satiation.’ ”

“The public health messaging around diet and exercise, and their relationship to the epidemics of type 2 diabetes and obesity, has been corrupted by vested interests,” they add (with British spellings). “Celebrity endorsements of sugary drinks, and the association of junk food and sport, must end. The ‘health halo’ legitimisation of nutritionally deficient products is misleading and unscientific. This manipulative marketing sabotages effective government interventions such as the introduction of sugary drink taxes or the banning of junk food advertising.”

“Such marketing increases commercial profit at the cost of population health,” they conclude.

You can read the editorial in full on the British Journal of Sports Medicine website.