The U.S. Centers for Disease Control and Prevention (CDC) has issued a new report that includes a map with “the most distinctive or characteristic” cause of death in each of the 50 states and the District of Columbia.

Distinctive is not, of course, the same as leading. In every state, the leading cause of death is either heart disease or cancer (as it has been for years).

But the authors of this new report wanted to present “a more nuanced view of mortality variation within the United States.”

Or, as one of the report’s authors told Science Times reporter Brian Wu, the report is meant to be “a provocative and colorful way of initiating conversations and underlining some bizarre trends the country currently has.”

To put together the report and its map, the CDC researchers made calculations based on national and state rates for 113 different causes of death. Those numbers enabled them to determine which cause of death in each state was statistically more common (“distinctive”) than the national average.

Two neighboring states, Wisconsin and Iowa, as well as Nebraska, Kansas and Ohio, share the same cause of death. For our neighbors to the west, North Dakota and South Dakota, the “most distinctive” cause of death is a single, specified lower respiratory illness: pneumonia.

Deaths from respiratory infections are not all that unusual, however. In fact, when combined, deaths from influenza and pneumonia are the eighth leading cause of death nationally, and deaths from chronic lower respiratory diseases (such as emphysema, asthma and chronic obstructive pulmonary disease, or COPD) rank third, right behind heart disease and cancer.

Some of the “most distinctive death” findings in the current CDC report — such as pneumoconiosis (black lung disease) in the coal-mining states of Kentucky, West Virginia and Pennsylvania — make intuitive sense, according to the CDC researchers, while others — such as septicemia (blood poisoning) in New Jersey — do not.

The findings also reflect some troubling trends. In four states (Tennessee, Alabama, Arkansas and Arizona) the most distinctive cause of death was the discharge of a firearm, while in three others (New Mexico, Nevada and Oregon) it involved some kind of intervention with law enforcement. 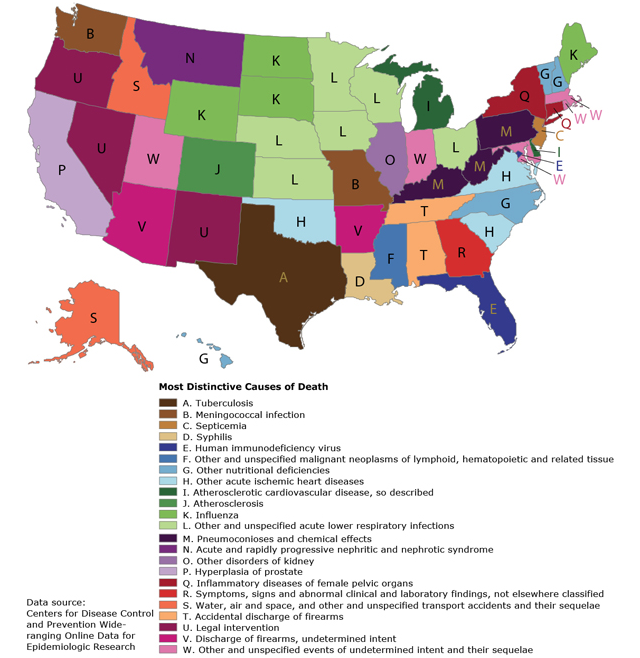 As the CDC researchers point out, the report has its limitations, including the fact that death certificates do not always record the actual cause of death. In addition, the CDC report offers only one distinctive cause of death for each state. “All of these were significantly higher than the national rate, but there were many others also significantly higher … that were not mapped,” the researchers point out.

The map is also predisposed to show rare causes of death. For example, in 22 of the states, the total number of deaths mapped was less than 100.

Still, the authors say the map should serve as “a robust conversation starter,” particularly among health professionals.

“Although chronic disease prevention efforts should continue to emphasize the most common conditions,” they write, “an outlier map such as this one should also be of interest to public health professionals, particularly insofar as it highlights nonstandard cause-of-death certification practices within and between states that can potentially be addressed through education and training.”

You can read the report on the CDC’s website.