The incidence of melanoma — the deadliest form of skin cancer — has doubled over the past three decades in the United States, and it will continue to increase unless we change our sun-worshipping ways.

That’s the sober news from a new Vital Signs study published earlier this week by the Centers for Disease Control and Prevention.

It’s particularly sobering here in Minnesota, which has one of the highest melanoma incidence rates in the country.

More than 90 percent of melanoma cases are caused by exposure to ultraviolet (UV) radiation from the sun or tanning beds.

Unless people adopt more preventive measures, the incidence rate will continue to increase over the next 15 years, and the number of newly diagnosed cases will reach 112,000 annually by 2030, the CDC report stresses.

And that will mean about twice as many deaths. The death rate from melanoma is 2.7 per 100,000 Americans.

“The rate of people getting melanoma continues to increase every year compared to the rates of most other cancers, which are declining,” Dr. Lisa Richardson, director of the CDC’s Division of Cancer Prevention and Control, said in a released statement. “If we take action now, we can prevent hundreds of thousands of new cases of skin cancers, including melanoma, and save billions of dollars in medical costs.”

Treating newly diagnosed melanomas cost $457 million in 2011, a figure that will climb to $1.6 billion in 2030 — again, unless people’s habits change.

Yet, although black populations have the lowest incidence rate, melanoma survival is poorest among African-Americans who develop the cancer on non-sun-exposed skin. The reasons are unclear, say CDC officials, but it may be due to later diagnosis (perhaps because both patients and physicians having a lower perception of the perceived risk among African-Americans) or the type of melanoma that they develop.

Among people aged 15 to 49, higher melanoma rates occur among women — probably, the CDC report says, because young women are more likely to engage in indoor tanning. Other research has shown that about a third of non-Hispanic white women between the ages of 16 and 25 use indoor tanning at least once a year.

Among people over the age of 50, the melanoma incidence rate is highest among men. This may be because men spend more time outdoors throughout their lives and are less likely to use sunscreen, the CDC report says.

In Minnesota, as in the rest of the country, melanoma has been on the increase over the past three decades. In 2011, the incidence rate dipped slightly from the previous year, but it was still high: 32.2 cases per 100,000 men and 24.3 cases per 100,000 women, according to the Minnesota Department of Health.

That gave us the fifth-highest melanoma incidence rate among all 50 states (behind Utah, Vermont, Delaware and Idaho). 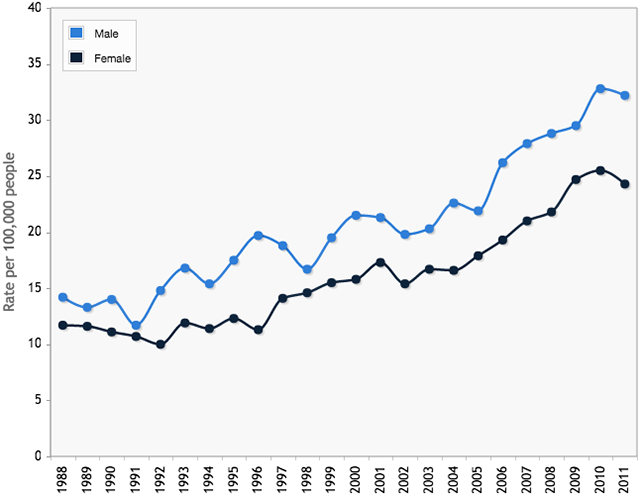 And here’s a truly disturbing figure: Melanoma is now the most common cancer diagnosed among Minnesota adults aged 20 to 34.

A comprehensive skin cancer prevention program — one that gets people to reduce their UV exposure from sunbathing and indoor tanning and to use more sunscreen and other protections — could result in 230,000 fewer people developing melanoma and save the country $2.7 billion in initial year treatments costs from 2020 to 2030, according to the CDC report.

As the report points out, Australia initiated just such a program, called SunSmart, in the state of Victoria in the late 1980s. “SunSmart was estimated to prevent more than 9,000 melanomas, avert over 1,000 deaths, and save 22,000 life-years in the state of Victoria during 1988-2003,” write the CDC officials. “SunSmart has also been shown to save $2.30 for every $1 invested.”

Australia has since expanded that public health initiative to include the entire country.

A similar comprehensive intervention program here in the United States — one that combines education, mass media campaigns and policy changes — would also save lives and money, say CDC officials.

But such a campaign would need funding, and the budgets for the CDC and other federal health agencies is being slashed, not increased, these days.

The report was published in the June 2 issue of the CDC’s Morbidity and Mortality Weekly Report (MMWR).