The season — and even the specific month — in which we are born is associated with certain disease risks later in life, according to a data-mining study [PDF] published this week in the Journal of the American Medical Informatics Association.

The study found, for example, that people born in early spring are at the highest risk of developing heart disease, while those born in early fall are most likely to develop respiratory illnesses.

Reproductive and neurological illnesses, on the other hand, were found to occur most often among people born during the early winter months.

As for individual birth months, the ones tied with the highest risk of disease were October and November, while May had the lowest risk.

The authors of the new study speculate that environmental factors may explain the differences in disease risk associated with seasons and birth months. For example, people born in hot, humid months, when home dust mites peak, were found back in 1983 to have a 40 percent increased risk of developing dust-mite related allergies and asthma later in life — a finding that has since been corroborated by research that has found that sensitization to allergens during early infancy increases the risk of developing allergies.

Now, before anybody gets too worked up about this new study’s findings, be aware that they come with significant caveats. Although the study used a huge data set — medical information collected from more than 1.7 million people who were treated at Columbia University Medical Center in New York City between 1985 and 2013 — the results do not prove that being born in a particular month actually contributes to later illnesses.

Here’s why: Studies like this one can report only associations, not direct causal links, between birth months and disease risk. Other factors, not measured in this study, might explain those associations.

Also, the data comes from a single hospital in a particular geographic area. The findings might not be relevant to other populations or areas (or climates).

In addition, as Nicholas Tatonetti, a co-author of the study and an assistant professor of biomedical informatics at Columbia University, noted in a released statement, “Even though we found significant associations, the overall disease risk is not that great. The risk related to birth month is relatively minor when compared to more influential variables like diet and exercise.”

The Columbia University researchers, on the other hand, had no particular diseases in mind when they started their data mining. In fact, they initially compared a whopping number of medical conditions — 1,688 — against the birth dates.

Once the researchers had analyzed all the data, they found that 55 of those conditions had a significant association with a particular birth month. Nineteen of them had already been reported in previous studies, and another 20 were medical conditions closely related to those reported diseases.

But 16 of the associations had not been identified in previous research, including nine heart-related conditions. 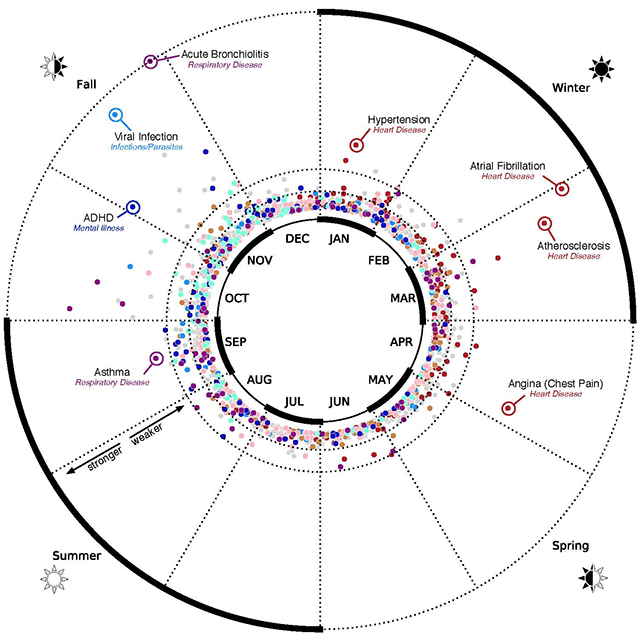 Here — with all of the caveats mentioned above — are some of those 16 medical conditions and the birth months associated with their highest and lowest risk:

“The risk is not that great that you should worry about when your baby is going to be born or when you might have been born,” says Tatonetti in a video released with the study. “There are lots of other variables that account for disease incidence.”

“What were interested now is in actually expanding this analysis and really try to understand those other environmental variables,” he adds. “We have some hypotheses that we’re exploring, but we want to go in a data-driven way and explore all the hypotheses to find the environmental mechanisms that might be driving these associations.”

You can read the study in full on the website of the Journal of the American Medical Information Association [PDF].