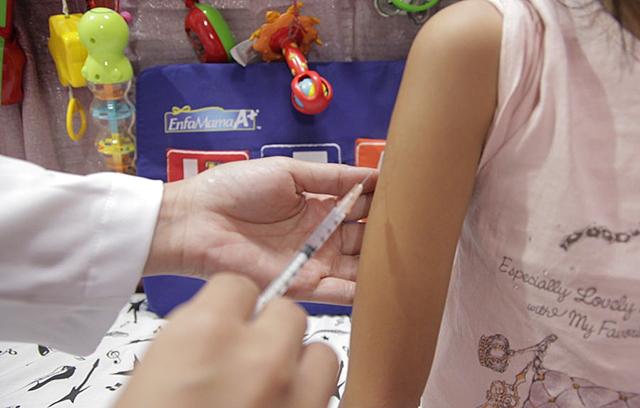 Creative Commons/Sanofi Pasteur
A third of the health professionals surveyed reported that they had not seen any changes in the willingness of parents to accept vaccinations.

Last winter’s much-publicized “Disneyland” measles outbreak may have led to one positive outcome: an increase in vaccine acceptance among parents.

In a recent nationwide survey by the physician-oriented website Medscape, 42 percent of pediatricians and other health professionals said they believed parents had become more accepting of vaccines since the Disneyland outbreak — particularly the measles vaccine.

That trend is welcomed news for public health officials and others who have become concerned by the growing problem of parents refusing or delaying immunizations for their children.

But the news from the survey wasn’t all good. A third of the health professionals surveyed reported that they had not seen any changes in the willingness of parents to accept vaccinations.

Furthermore, the trend toward greater acceptance could be short-lived.

From Jan. 1 through Aug. 21 of this year, 188 cases of measles were reported in the U.S. in 24 states and the District of Columbia, according to the Centers for Disease Control and Prevention (CDC). Most have been linked to the measles outbreak that first surfaced at Disneyland last December, an outbreak that was probably started by an individual who became infected while traveling overseas.

Eighty-three percent of this year’s measles cases (at least, of the 173 that were reported through July) involved individuals who were unvaccinated, the Medscape report notes. That means, of course, that 17 percent of the people who came down with measles this year were already vaccinated — a factor that many parents use to justify their decision not to have their child vaccinated.

But among the 17 percent of cases in which the person developed the measles after being vaccinated, only 8 percent had received both recommended doses of the vaccine.

The number of measles cases reported this year are concerning, but will probably (and fortunately) not reach the 668 confirmed cases that occurred in 2014 — the highest number since the elimination of measles was declared in the U.S. in 2000. A majority of last year’s cases (338) involved a group of unvaccinated Amish people in Ohio, which may explain why that outbreak had little influence on vaccination decisions by parents elsewhere in the country.

This year’s Disneyland outbreak, however, seems to have resonated more with parents — and to have shifted at least some parents’ attitudes toward vaccines.

“More parents read the news and are open to counseling,” said one health professional in the Medscape survey.

Here are some of the other findings from the survey:

“MMR’s reputation seems to have been permanently stained by the now discredited link with autism; the perception of a connection persists,” write the author’s of the Medscape report. “… Objections to the HPV vaccine reported by survey participants include the fear that giving the vaccine will encourage sexual activity, and the conviction that the child is too young for sexual activity and therefore does not need the HPV vaccine. Media reports about complications associated with the HPV vaccine pose other barriers to its uptake.”

Practitioners say they keep serving families who refuse vaccinations primarily out of the hope that they can persuade them to change their minds.

If there has been an upswing this year in vaccination acceptance among parents who previously refused them, it may be short-lived.

In a Medscape article that accompanied the release of the survey’s findings, a pediatrician in Washington State noted that a local measles outbreak had “led to a panic that temporarily increased vaccine acceptance, but that parents who had avoided immunization eventually began refusing again.”

The article also describes what happened when a group of physicians in Vermont sent a letter earlier this year to the parents of children in their practice who were either unimmunized or underimmunized. They asked the parents to reconsider their stance on immunization “in light of the current news.”

Only two or three of the 50 families who were sent the letter changed their minds and brought their children in for immunizations.

“It’s distressing, but not terribly surprising,” one of the physicians told Medscape.

You can read through a slide presentation of the survey’s findings on the Medscape website.

Fewer parents are refusing vaccines for their children, a physician survey suggests