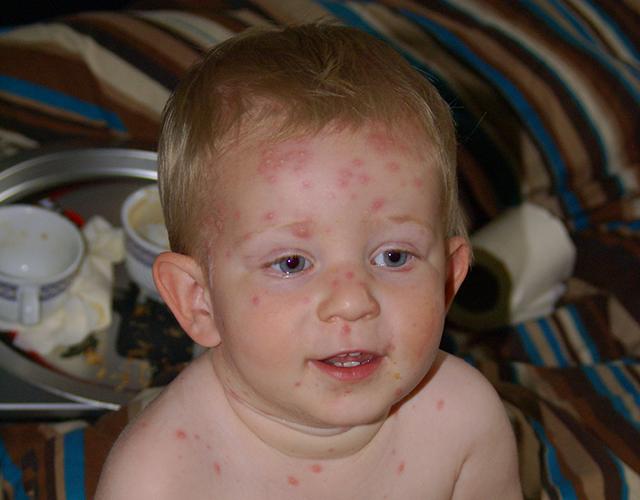 Creative Commons/Phyllis Buchanan
A study, conducted by researchers at the CDC, reports that since the chickenpox vaccine became available in 1996, cases of the disease — and hospitalizations for its complications — have dropped dramatically.

The issue of mandatory vaccines for children continues to flare up in the 2016 presidential race.

It did so just last week in Iowa, when Republican candidate and former Hewlett-Packard CEO Carly Fiorina said, “When you have highly communicable diseases where you have a vaccine that’s proven, like measles or mumps, then I think a parent can make that choice, but then I think a school district is well within their rights to say, ‘I’m sorry, your child cannot then attend public school.’ So a parent has to make that trade-off.”

She didn’t really explain what she meant by “proven,” or what agency or group she would let decide that all-important point.

For who gets assigned to make that decision is not a minor matter. People who are against childhood vaccines, mandatory or otherwise, often twist and distort data to claim that there’s no proof that the vaccines work — and that it’s a “myth” that widespread vaccination programs are the reason why the incidence of childhood diseases like measles, mumps, chickenpox and pertussis (whooping cough) has plummeted in recent decades.

The effect on chickenpox

But it’s not a myth, as yet another study has found. This study, conducted by researchers at the Centers for Disease Control and Prevention (CDC) and published last week in the Journal of the Pediatric Infectious Diseases Society, reports that since the chickenpox vaccine became available in 1996, cases of the disease — and hospitalizations for its complications — have dropped dramatically.

The study’s findings also suggest that the widespread use of the chickenpox (varicella) vaccine has contributed to herd immunity — protection from the disease for children and adults who have not been vaccinated.

Here are the details: Before 1996, about 4 million people developed chickenpox each year in the U.S., according to the CDC. Complications from the disease resulted in about 11,000 hospitalizations annually, and 100 to 150 deaths. Most severe cases of the disease occurred in people, particularly children, who were previously healthy,

Leung and Harpaz also looked at the number of reported cases that occurred after the two-dose varicella vaccine became available in 2007. The second dose was added in the hopes of further reducing the incidence of the disease — primarily the number of chickenpox outbreaks.

The data revealed that there were 60 percent fewer chickenpox-related outpatient visits and 38 percent fewer hospitalizations in 2012 than in the pre-two-dose vaccination year of 2006.

The greatest reduction in outpatient visits and hospitalizations since the mid-1990s has occurred among children and teenagers (ages 1 to 19), the population that has been the primary focus of vaccination efforts.

Interestingly, however, Leung and Harpaz also found that the incidence of the disease also dropped significantly among infants younger than 12 months, for whom the vaccine is not recommended, and among adults, who are often not immunized.

These reductions are strong evidence of herd immunity.

“The surrounding population that can be vaccinated are not getting sick, and therefore the data suggest that these infants are being protected,” said Leung in a statement released with the study. “We’re seeing that for adults as well.”

“After 16 years, the varicella vaccination program continues to mature and to provide increasing beneficial national impact,” Leung and Harpaz conclude. “We provide evidence from our large study population that outpatient visit and hospitalization rates continue to decline, as does case severity.”

Whether or not this new study will be enough proof of the value of the chickenpox vaccine for people opposed to childhood vaccination programs remains to be seen.

But here’s another piece of evidence, this time from a 2011 study: Deaths from chickenpox-related complications fell 88 percent in the first decade after the chickenpox vaccination program got under way in the U.S.

Among children and teenagers, those deaths dropped 97 percent.

You can download and read the new study on the website of the Journal of the Pediatric Infectious Diseases Society.