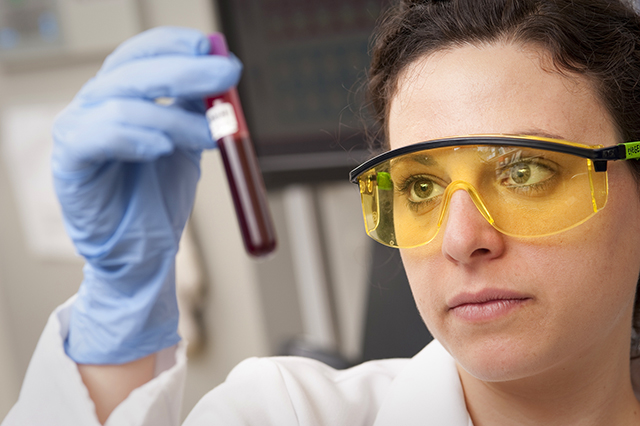 Creative Commons/National Eye Institute
The study was funded in part by XRGenomics Ltd, a company that is developing genetic diagnostic tests “to provide advanced warning for chronic diseases, such dementia and pre-diabetes.”

Have scientists developed a new, simple blood test that can predict a person’s risk of developing dementia?

That’s certainly what some media reports from the past few days would have you believe. “Drop of blood can show biological age and predict Alzheimer’s disease,” declared one headline. “ ‘Gene signature’ predicts Alzheimer’s years in advance,” stated another.

And here’s my favorite: “There’s now a blood test to predict when you’re going to die.”

Wow. A new test can tell us when we’ll going to die. That would be pretty amazing.

But, as experts at the “Behind the Headlines” website for Britain’s National Health Service (NHS) point out, these media reports have jumped the gun.

Yes, the authors of the study on which the reports are based — published Monday in the journal Genome Biology — do describe a genetic scoring system that they say “can act as a diagnostic of future health, using only a blood sample.”

However, any suggestions that the system will have broad clinical use are quite premature.

“It is important to realize this study is in the early experimental stages and the [genetic] score has so far only been tested in small groups of people with known disease status,” write the NHS experts. “It is not known how well it could predict future disease development.”

“There is also the issue of the psychological impact of being told you are of ‘older’ biological age, or may have higher risk of dementia or other chronic diseases — especially if there is little you can do to prevent this,” they add.

The authors of the study, primarily researchers at King’s College London, are certainly enthusiastic in their statements about their findings — both in the study itself and in accompanying press statements.

But that excitement needs to be viewed with a bit of skepticism. The study was funded in part by XRGenomics Ltd, a company that is developing genetic diagnostic tests “to provide advanced warning for chronic diseases, such dementia and pre-diabetes.”

Six of the 17 authors of the study have financial ties (including being shareholders) in that company.

For the study, the researchers used muscle, skin and brain tissue samples from men aged 25 to 65 to identify 150 genetic markers that the researchers believe are an accurate indicator of an individual’s biological age. The markers are measures of RNA activity. RNA is a molecular “messenger” that helps carry out, through the production of proteins, the instructions encoded in our DNA.

The researchers then used these markers to create a “healthy aging gene score” for older men (average age: 70 years). The men’s scores had a wide distribution, varying by about fourfold.

The researchers found no correlation between the scores and blood pressure, cholesterol levels or other traditional markers of health and disease. Nor did the scores correlate with lifestyle factors, such as physical activity.

But when tested among a group of more than 700 older men who were followed for 12 years (from age 70 to 82), higher scores were associated with better cognitive health and healthy kidney function — two factors that can be predictive of a longer life. Lower scores, on the other hand, were associated with an increased risk of being diagnosed with Alzheimer’s disease.

The study also revealed that scores derived from the RNA activity in blood had the same predictive value as those derived from other tissue samples.

The study’s findings are intriguing, but they are a long way from being translated into any practical applications, as the NHS experts point out (with British spellings):

Though the study demonstrated that a higher score could indicate healthier ageing, drawing any further implications from this would be difficult.

For example, there are no score “cut-off” points identified that could distinguish between healthy and less-healthy at particular ages (e.g. a healthy score for 40, 50 or 60 year olds). Even if a score was lower and in the “less healthy” bracket, it is not certain what this would mean.

Determining the potential value of any such test in clinical practice is hard – just having a score would be of little value by itself in terms of preventing, diagnosing or managing any disease. It would need to be seen whether any such test could offer any benefit compared with standard medical practice.

There would also be many other things to assess, including who would be given the test, what could be the risks of a “positive test” (for example, the psychological effects of being told you are of “old” age), and importantly whether anything effective could actually be done about it.

“Overall, the study is of interest,” the NHS experts conclude, “but it is too soon to suggest to the general public that they could have a blood test to determine their age and risk of types of dementia such as Alzheimer’s.”

It is not too soon, they add, to take steps to reduce your risk of dementia (and other chronic diseases). It’s a very familiar presciption:

A new blood test can tell us if we’ll get Alzheimer’s? Not so fast