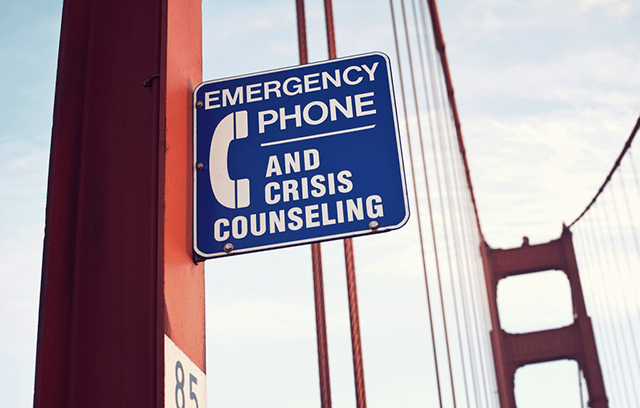 Creative Commons/Rafael Castillo
The study found evidence that installation of crisis telephones and signs that encourage people to seek help can help save lives at suicide hotspots.

Restricting access to known “suicide hotspots,” such as bridges, tall buildings and cliffs, can help reduce deaths at those locations by more than 90 percent, according to the findings of an international study published Wednesday in The Lancet Psychiatry.

The study also found evidence — for the first time, say its authors — that two other preventive approaches can help save lives at suicide hotspots: the installation of crisis telephones and signs that encourage people to seek help and the use of closed-circuit cameras or police “suicide patrols,” which increase the likelihood that someone will intercede and stop a suicide attempt.

“These key interventions have the potential to complement each other and buy time to allow an individual to reconsider their actions and allow others the opportunity to intervene,” said the study’s lead author, Jane Pirkis, director of the Centre for Mental Health and the University of Melbourne, in a released statement.

For the study — a meta-analysis — Pirkis and her colleagues reviewed data from 23 previous studies that had investigated the effectiveness of three interventions (restricting access, encouraging help-seeking and increasing the likelihood of third-party intercession) in reducing suicide attempts at 18 suicide hotspots around the world, including four in the U.S. (None was in Minnesota.)

At six of the sites, the number of suicides in the post-intervention period dropped to zero.

Not enough data was available to assess the impact of increasing the likelihood of help from a third party (the use of closed-circuit cameras and/or suicide patrols) in isolation. But that intervention led to 47 percent fewer deaths when used in combination with other methods.

“Although suicide methods at high-risk locations are not the most common ways for people to take their own lives and may only have a small impact on overall suicide rates, suicide attempts at these sites are often fatal and attract high profile media attention which can lead to copycat acts,” said Pirkis. “These methods of suicide also have a distressing impact on the mental wellbeing of witnesses and people who live or work near these locations.”

In Minnesota, falls account for about 2 percent of suicide deaths, according to data provided MinnPost by the Minnesota Department of Health (MDH). That’s significantly less than the leading method of suicide in the state: guns, which account for 47 percent of all such deaths.

“It may not be a high percentage of our suicides,” said Mellissa Heinen, the suicide prevention coordinator at MDH, in a phone interview Tuesday. “But having said that, when you lose a loved one and you find out that there was something that could have been done to prevent it, it’s kind of hard to hear, well, it wasn’t a big enough number.”

“It seems like the more intense the intervention, the better the outcome,” said Heinen. “So just the phone number will be less effective than if you have a net underneath.”

“It’s always an issue of how do we best use public funding and efforts to get the most prevention for our effort,” she added. “People have to look at that balance. But having said that, if we have a community that has a concern [about a suicide hotspot] and wants to do something about it, it makes sense to support them in doing that.”

As Pirkis and her co-authors point out in their study, some communities oppose putting up barriers at suicide hotspots, usually for aesthetic reasons or because they believe that people will find other sites to jump from.

“We refute these arguments,” Pirkis and her co-authors write. “There are many examples of barriers that have been incorporated into the environment in a way that does not mar the view, and studies of substitution suggest that, although there may be some shifting of suicidal acts to other sites, deaths by the same method are still significantly reduced overall.”

Of course, putting up a barrier is not always feasible — due to cost, for example, or location. In those cases, “encouraging help-seeking and increasing the likelihood of intervention by a third party” would be good alternative strategies, the researchers write.

You’ll find an abstract of the study on The Lancet Psychiatry website, but the full paper is behind a paywall.