U.S. hospitals are doing a better job than in the past at adopting policies and practices that encourage mothers to breastfeed, but much more needs to be done to ensure that all women receive breastfeeding support in the first few hours and days after giving birth, according to a report published Tuesday by the Centers for Disease Control and Prevention (CDC).

Between 2007 and 2013, the percentage of U.S. hospitals adhering to a majority of practices in the global “Ten Steps to Successful Breastfeeding” guidelines almost doubled, increasing from about 29 percent to almost 54 percent, the report found.

But only 289 of the approximately 3,300 maternity hospitals in the U.S. — or less than 10 percent — had earned the guidelines’ “baby-friendly” designation for implementing all 10 of the practices.

CDC officials estimate that of the 4 million babies born each year in the U.S., only 14 percent are born in one of those “baby-friendly” hospitals.

That finding is concerning, for research has shown that hospitals can play a major role in increasing breastfeeding rates. And health officials almost universally agree that breastfeeding offers many important benefits for both mother and child. Breastfed babies are at reduced risk, for example, of developing respiratory and gastro-intestinal infections, asthma, sudden infant death syndrome (SIDS), diabetes and obesity.

For mothers, breastfeeding is associated with a reduced risk of breast and ovarian cancers, as well as diabetes and heart disease.

The CDC and other health organizations recommend that mothers breastfeed their babies exclusively (no other solids or liquids) for about the first six months of an infant’s life and that they then continue to breastfeed for at least another six months — until the child is a year old.

In the U.S., 80 percent of new mothers begin breastfeeding their infants immediately after birth, but only 22 percent are exclusively breastfeeding when the baby is six months old. Only 29 percent of babies are breastfed for the recommended 12 months.

Six in 10 mothers say that they stopped breastfeeding earlier than they had intended. Often that is because they have received incorrect or conflicting information — including from nurses and physicians — about breastfeeding.

Minnesota not in top tier

Minnesota is not one of those 21 states. It falls — along with three of its nearest neighbors, Wisconsin, South Dakota and North Dakota — within the group of states with 40 percent to less than 60 percent of hospitals implementing more than half of the steps in the guidelines.

Minnesota’s neighbor to the south, Iowa, is in the next lowest group, with only 20 percent to less than 40 percent of its hospitals implementing a majority of the guidelines’ steps. 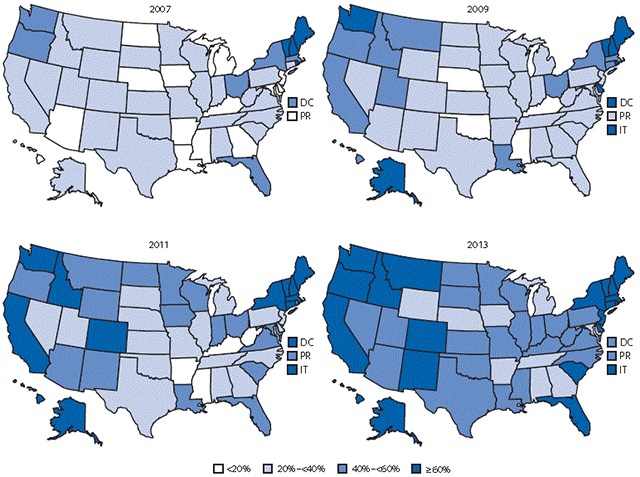 Source: CDC
The figure above contain four maps of the United States showing the percentage of U.S. hospitals implementing more than half of the Ten Steps to Successful Breastfeeding, by state or jurisdiction in 2007, 2009, 2011, and 2013. DC = District of Columbia; IT = Island Territories, including American Samoa, Guam, Northern Mariana Islands, and Virgin Islands; PR = Puerto Rico.

Here are those 10 Steps, along with the national percentages of hospitals that reported implementing them in 2013:

“Every one of the Ten Steps is important to use in a hospital to give babies the best start, to help mothers start and continue to breastfeed as recommended,” CDC Director Dr. Tom Frieden told reporters during a telephone media briefing on Tuesday. “Ideally, we would like every birth hospital in this country to adopt all of the Ten Steps and become ‘baby-friendly.’ “

The new report was published in the October 6 edition of the CDC’s Morbidity and Mortality Weekly Report (MMWR), where it can be downloaded and read in full.