Earlier this year, a large meta-analysis conducted by a team of Cochrane reviewers found that eliminating larger-sized servings of foods and beverages would drastically reduce the average daily number of calories people consume: by 12 to 16 percent for adults living in the United Kingdom and by 22 to 29 percent for those living in the United States.

That finding suggests that by switching to smaller food portions — the kinds of portions people were used to several decades ago — Americans would consume stunningly fewer calories: an average of 527 fewer each day.

Eliminating that many daily from the average American diet would go a long way to reducing the nation’s out-of-control obesity rates — and to lowering the incidence of many chronic diseases.

But how do we get people today to return to the portion sizes of, say, the 1950s, particularly when “portion distortion” is so ingrained in our culture — and when foods sold in larger packages or containers often come with significant cost savings?

Public can’t do it alone

The authors of the Cochrane review tackle that question in a thoughtful analysis article published last week in the BMJ. They argue that individuals are not going to be able to de-supersize their meals by themselves. They are going to need help from the food industry and politicians.

“A combination of regulatory and non-regulatory measures is likely to be needed,” write lead author Theresa Marteau of the University of Cambridge in Great Britain and her colleagues. “Indeed, the food industry may find it difficult to act without regulation, given ‘first mover disadvantage.’ Including disincentives or sanctions for non-participating in voluntary agreements may also help.”

Yet, as Marteau and her colleagues acknowledge, “although policy makers and the food industry have primary responsibility for action, public acceptability is likely to be an important facilitator.”

And, yes, the willingness of the public to accept policies to reduce obesity through portion control has a mixed record, but people can be persuaded to support such policies, particularly when the focus is on children.

“A newspaper survey of New York residents in 2012 reported 60% opposed the proposed 16 ounce cap on sugary drinks,” Marteau and her colleagues point out. “This was during a media campaign, funded by soda manufacturers, highlighting the rights of citizen to purchase soda in sizes ‘without interference from bureaucrats.’ By contrast, a more recent survey of UK and US participants found greater support for this intervention, with 59.9% and 53.5%, respectively, finding it acceptable.” 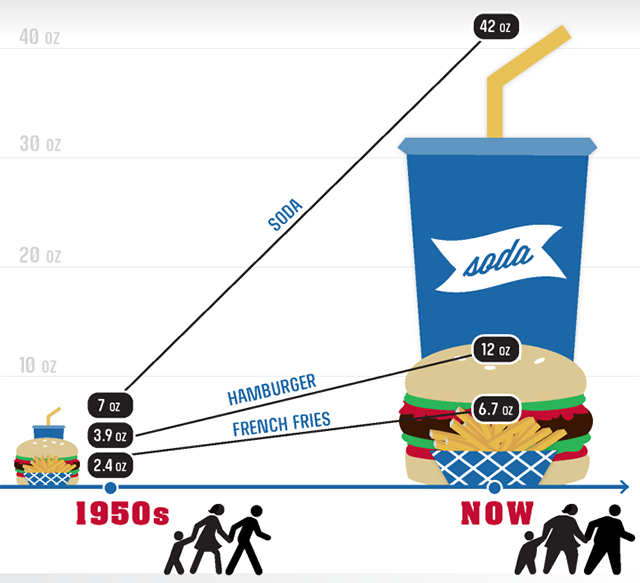 Centers for Disease Control and Prevention
The average restaurant meal today is more than four times larger than in the 1950s. And adults are, on average, 26 pounds heavier.

Here is a summary of the interventions recommended by Marteau and the other experts:

Marteau and her colleagues acknowledge that evidence for the effectiveness of these recommended changes is currently limited, but research has shown that reducing the availability — and increasing the price — of two other culturally embedded products associated with poor health, tobacco and alcohol, does work.

“Reducing portion sizes across the whole diet to realize large reductions in consumption may mean reverting to sizes of portions and tableware similar to those in the 1950s,” they add. “This would involve reductions of over 50% for some energy dense products, far greater than the typical 5% reductions currently offered and negotiated with the food industry.”

You can read the Cochrane reviewers’ analysis article on the BMJ website. You can find more information on portion control (and on “portion distortion”) at the National Heart, Lung, and Blood Institute’s website.