Women in the United States are waiting longer to have their first child — a trend that is occurring in all states and among all major ethnic and racial groups, according a report released Thursday by the Centers for Disease Control and Prevention (CDC).

The mean age of first-time mothers in 2014 was 26.3 years. That’s up from 24.9 years in 2000 — and the highest it’s been since 1970, when the government first started collecting this particular statistic.

As the authors of the new report point out, this trend “can affect the number of children a typical woman will have in her lifetime, family size, and … the overall population change in the United States.”

The main reason for the rise in the age of first-time mothers is the decline in the number of teenage births, which has fallen 42 percent over the past 15 years, according to the CDC data.

The 2000-2014 drop in teen births, by the way, is not related to an increase in abortions. As the Guttmacher Institute reported in a study published in 2014, the teen abortion rate has dropped 66 percent since its 1988 peak.

Yet, as the new CDC report shows, women aren’t just waiting until they are out of their teens to have their first child. An increasing number are delaying childbirth even further — until they’re out of their 20s. 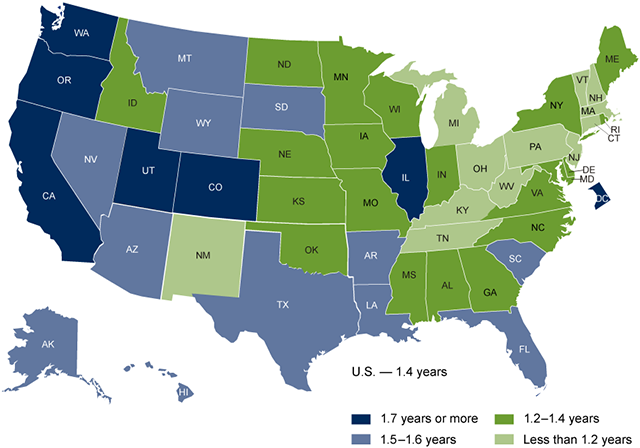 The delay in childbirth is occurring in all major racial groups and in all groups with Hispanic origins. Non-Hispanic black women experienced the largest gains in mean age at first birth (up 1.9 years between 2000 and 2014), while women of Cuban background had the smallest gains (up 0.5 years).

Overall, Asian/Pacific Islander women had the highest mean age at first birth in 2014 (29.5 years), and American Indian/Alaskan Native women had the lowest (23.1 years). 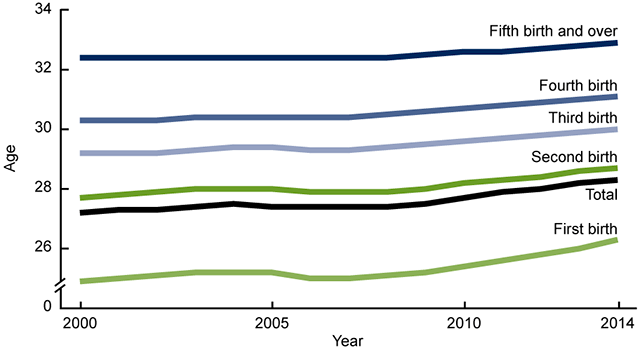 Along with Asian/Pacific Islander women, three other groups had a higher mean age at first birth in 2014 than the overall average of 26.3 years: non-Hispanic white (27.0 years), Cuban (27.0 years), and Central and South American (26.5 years).

The CDC data also reveals that the trend toward having first children at older ages is occurring in all states — and the District of Columbia.

States with the largest increases (1.7 years or more) in the mean age of first-time mothers tended to be in the western United States (California, Oregon, Washington, Utah and Colorado). But greater increases were also seen in Illinois, Arkansas and Washington, D.C.

States with the smallest increases (less than 1.2 years) were all east of the Mississippi River, from Tennessee to New Hampshire — with one exception, New Mexico.

In most Upper Midwestern states — including Minnesota — the mean age of first-time moms rose between 1.2 to 1.4 years. (The CDC report does not include specific state-by-state data.)

FMI: You can read the CDC report in full on the agency’s website.