“Take the Prediabetes Risk Test” video from the Ad Council

In January, the Centers for Disease Control and Prevention (CDC), the American Diabetes Association (ADA) and the American Medical Association, in partnership with the Ad Council, launched a new campaign to increase the public’s awareness of pre-diabetes.

According to the CDC, some 86 million American adults may have pre-diabetes, which the agency says is characterized by “blood glucose (sugar) levels [that] are higher than normal — but not high enough to be diagnosed as diabetes.”

“Pre-diabetes increases the risk for type 2 diabetes, heart disease, and stroke,” says Ann Albright, director of the CDC’s Division of Diabetes Translation, in a video released on MedScape with the campaign. Indeed, Albright says that without treatment — “a structured lifestyle program that provides real-life support for healthful eating, increasing physical activity, and enhancing problem-solving skills” — some 15 to 30 percent of people with pre-diabetes will go on to develop full-fledged diabetes within five years.

The campaign is encouraging people to talk with their physicians about getting tested for pre-diabetes.

Diabetes is certainly a serious disease. It can lead to disabling and sometimes life-threatening health complications, including heart disease, kidney failure, blindness and amputations. More than 29 million Americans, or 9.3 percent of the U.S. population, have the disease — a number that has increased four-fold over the past three decades.

But many experts are not convinced that pre-diabetes, a term coined by the ADA a few years ago and used almost exclusively in the United States, deserves the attention it’s receiving in the new public awareness campaign.

In fact, they don’t think pre-diabetes is a medical condition at all, but rather “an artificial category with virtually zero clinical relevance” — and one that may lead to more harm than good. As two diabetes experts argued in a 2014 commentary published in the journal BMJ, the pre-diabetes diagnosis is needlessly putting millions of people at risk of receiving unnecessary medical treatment and is creating “unsustainable burdens” for health care systems.

One of the authors of that commentary is Dr. Victor Montori, an endocrinologist who specializes in diabetes at the Mayo Clinic in Rochester, Minnesota. MinnPost recently spoke with Montori regarding his concerns about the pre-diabetes diagnosis and the new public awareness campaign that is encouraging people to seek out that diagnosis. A condensed and edited version of that conversation follows.

MinnPost: What is pre-diabetes?

Victor Montori: The CDC is now defining it based on the ADA’s definition, which is essentially any measure of elevated blood sugars, whether [resulting from] a fasting blood glucose [test] or after a two-hour glucose tolerance test or a hemoglobin A1C [test]. If it’s elevated and it doesn’t qualify you as having diabetes, it qualifies you as having pre-diabetes.

The problem with that definition is that it includes too many people, and the problem with including too many people is that the proportion of those people who will then go on to develop diabetes is actually very small — in the order, perhaps, of 2 to 3 percent over the course of three to five years. This is different from the number that the CDC normally gives of around 20 to 30 percent moving on to diabetes in that period of time. [Those larger percentages] come from studies in which only one of the criteria was used to define pre-diabetes, which was the blood sugar being abnormal two hours after a glucose tolerance test.

But nobody does a glucose tolerance test in practice. So the majority of people that will be diagnosed with pre-diabetes will be diagnosed that way because of elevated [fasting] blood sugars or because of a hemoglobin A1C. And the proportion of those people who go on to develop diabetes is infinitely smaller than the proportion that goes on to develop it if they have an abnormal glucose tolerance test.

MP: The CDC is estimating that 86 million people in the U.S. have pre-diabetes, and that nine out of 10 of them are unaware of it.

VM: That number is a reflection of the loose definition that the CDC and the ADA have chosen to identify the nature of the problem. Obviously, they want the problem to appear very large. This is not acceptable — to create a public health problem by virtue of changing the definition. By that definition, the number of people with abnormal sugars, either diabetes or pre-diabetes, is too large.

MP: What are your concerns about the impact of the new public service campaign? 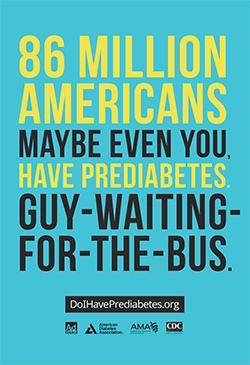 Ad Council
An example of the pre-diabetes awareness
print campaign.

VM: The CDC and Congress and some insurers and some other groups — departments of health in several states — are committed to asking the health care system to check blood sugars in people who come in contact with the health care system in order to identify those people with pre-diabetes. If they identify someone as having pre-diabetes, they are then [to be] referred to programs, for instance, like those offered by the YMCA, where they can [receive] physical activity and diet recommendations.

In general, I don’t have a problem with any of that. But I do have two fundamental concerns. First, if the problem affects one in three Americans, is it possible that diabetes is not the result of poor individual decision-making or poor individual habit choices, but rather the society that we are building? That society — the environment that we create — is a combination of advertisement, food policies, worksite policies, transportation policies, education policies. If these things are what is causing diabetes, why would we want to intervene one person at a time while keeping them in the environment that is pushing them in the direction of diabetes? How likely is it that we are going to have a sustained benefit from identifying individuals and treating them individually? So that’s one problem I have.

MP: And the second one?

VM: Patients already complain about their doctors not having time to meet with them and about hurried consultations. So we’re now going to be sending 86 million or more Americans to that overtaxed and overwhelmed health care system to seek individual care and counseling for pre-diabetes. It seems to me that people with diabetes are going to have to compete for access to care — the kind of care that is really important, like preventing complications. And if they don’t have such access, we’re going to have a net negative impact in that now we’re going to have more people living with the complications of diabetes.

MP: What should people do with the messages they’re hearing from the CDC’s pre-diabetes campaign?

VM: It’s hard to know. We’ve reviewed those messages here in our research group, and we’ve found some of them to be really problematic. There seems to be some language in those ads that is very paternalistic, condescending and guilt forming, particularly some of the ones directed at young mothers.  So, to some extent, I think that if diabetes is not making them sick yet — because, of course, they don’t have the disease — then the messaging itself, by producing guilt and blaming individuals for the shortcomings of our policies, may produce discomfort, distress and disease.

I find the campaign misguided. Maybe I’m a dreamer, maybe I’m a romantic, maybe I’m unreasonable, but I think we should be taking the numbers that the CDC has produced from their very generous definition of pre-diabetes and use them as a wake-up call for policymakers. How might we develop our towns, workplaces, cities, families, schools [so that] diabetes is not the outcome?

For example, we build wider roads so more cars can move around, and we create more suburbs so that people have to get in their cars to go shopping. But what if we changed the zoning so that people can walk to shops? What if we create more public transportation so that people can get to their workplace and spend the last mile, perhaps, walking from the transportation to their workplace? If you go to large urban centers in cities with lots of opportunities of that nature, you see a lot fewer people with obesity.

The other part of the policymaking we need to not forget is that where there is a lot of wealth and income inequality, where there is a lot of chronic stress related to poverty and violence, there is also more diabetes. In the United States, there is a group that is actually having less diabetes: people who are affluent and white. Poor, brown, young people are having more diabetes now. That should tell you that [the diabetes epidemic] is probably not a crisis in will power among the poor, but rather something fundamental about how we are distributing social justice in our society.

I would love to see the presidential candidates tackle the issue of how our society is creating diabetes. It’s much easier to talk about the lack of personal responsibility and tell everybody to eat more broccoli. I think it’s much more interesting to say, gosh, we’ve created a society in which the poor and the brown are developing diabetes. What can we do to change that?  Let’s look at our policies, both in terms of chronic stress and poverty and violence and also in terms of activity and lifestyle. What would lead to better health? I think that investment would be better than tackling this problem as if it were the fault of individuals.