Half the world’s population — about 5 billion people — will be nearsighted within three decades if current trends continue, according to a new study published this month in the journal Ophthalmology.

The study also projects that 1 in 5 of those individuals will develop a severe form of nearsightedness that will put them at a significant increased risk of going blind.

Nearsightedness, or myopia, is a common eye condition that is determined by the shape of the eye. It lets people see nearby objects clearly, but not distant objects, which appear blurry.

The severe form of nearsightedness, known as high myopia, occurs when the eyeball becomes too long. It can lead to tears in the retina (the light-sensitive layer of cells at the back of the eye), or even to the retina detaching. People with high myopia are also at increased risk of developing glaucoma, cataracts and macular degeneration — conditions that can cause permanent blindness.

Some health officials have declared the United States and other countries around the world to be in the middle of a “myopia epidemic.” A 2009 study found that the percentage of Americans who were nearsighted had risen from 25 percent in the early 1970s to 42 percent in the early 2000s — a jump of 66 percent.

In parts of Asia, the rise in myopia has been even more striking. In China, for example, the rate of myopia among teens and young adults is now estimated at 80 to 90 percent.

For the current study, an international team of researchers analyzed data from 145 earlier studies that involved more than 2.1 million people in countries around the world.

If those percentages continue at their current pace, say the researchers, 49.8 percent of the world’s population — 4.8 billion people — will be nearsighted by 2050. That’s more than a doubling of the percentage since 2000.

In addition, 9.8 percent — 938 million people — will have the severe form of the condition by 2050. That percentage is more than three times higher than in 2000.

The increase in the number of people with myopia is “widely considered to be driven by environmental factors … principally lifestyle changes resulting from a combination of decreased time outdoors and increased near-work activities,” the study’s authors write. 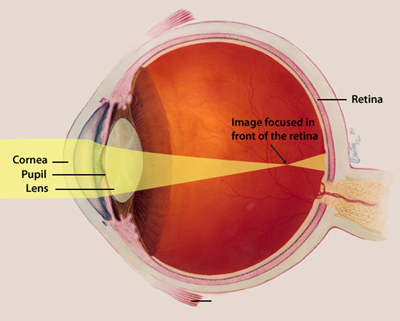 Genetics is likely involved as well, but it can’t explain myopia’s rapid increase over the past few decades, say the researchers.

The near-work activities referred to in the study include reading, computer work (or play), and other activities that require intense visual focus. The more time children spend in such pursuits, the higher their odds of developing myopia, according to a large review of existing research on the topic that was published in 2015.

Many people like to specifically blame the increased time young people spend on computers and mobile phone screens for the upsurge in myopia. But the rise began in the 1970s, long before computers and related devices became ubiquitous.

Nor have researchers been able to provide clear answers about screen time’s role in myopia. Indeed, a recent study, which followed children for 20 years, reported no link between time spent in front of a TV or computer screen and nearsightedness.

The authors of the current Opthalmology study point to a broader possible factor: “the high-pressured educational systems, especially at very young ages in countries such as Singapore, Korea, Taiwan, and China.”

Not only are high-pressured education systems causing young children to spend more time on “near work” activities, the long hours of studying required by such systems is keeping children indoors.

Other studies have found strong associations between the time children spend outdoors — particularly in early childhood — and the development of myopia. The less time outdoors, the greater the risk of becoming nearsighted.

As I’ve noted here before, some researchers believe sunlight slows down myopia-associated growth of the eyeball, perhaps by causing the retina to produce high levels of dopamine, a brain chemical known to inhibit eye growth.

Should that theory about nearsightedness prove true, it does not bode well for the myopia epidemic here in the United States. A 2012 study found that only about half of American pre-schoolers  spend time playing outdoors on a daily basis.

FMI: You can read the current study in full on Opthalmology’s website. The journal is published by the American Academy of Ophthalmology.