More than one third of American adults are not getting enough sleep, according to a study published late last week by the Centers for Disease Control and Prevention (CDC).

For optimal health, experts recommend a minimum of seven hours of sleep each night for most people aged 18 or older. Getting less that that amount is associated with an increased risk of obesity, diabetes, high blood pressure, heart disease, stroke, mental distress and premature death. Insufficient sleep also leaves people more susceptible to accidents and mental errors, both on the job and off.

The CDC study, which analyzed data collected from a 2014 survey of more than 444,000 adults from all 50 states and the District of Columbia, found that only 65.2 percent of respondents reported getting the recommended minimum amount of sleep.

That means that a significant number of American adults — an estimated 83.6 million — have a daily sleep deficit that may be putting their health at risk.

This finding suggests “an ongoing need for public awareness and public education about sleep health,” say the CDC researchers. It also underscores, they add, the need for society to develop better worksite shift policies to ensure that all workers are getting a healthful amount of sleep.

As the CDC has said elsewhere, “Getting sufficient sleep is not a luxury — it is a necessity — and should be thought of as a ‘vital sign’ of good health.”

Here in Minnesota we seem to be doing somewhat better at getting our Zzzs — at least compared to people in many other states. Among the Minnesotans who responded to the CDC survey, 70.8 percent reported sleeping for at least seven hours on a typical night. 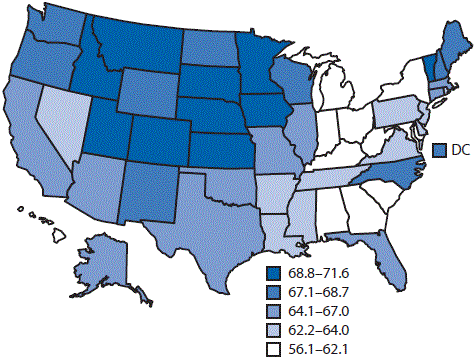 Behavioral Risk Factor Surveillance System, United States, 2014
Age-adjusted percentage of adults who reported ≥7 hours of sleep per 24-hour period.
That’s less than in South Dakota, which is apparently the most-rested state, with 71.6 percent of adults said they slept for at least seven hours nightly. But it’s much better than in Hawaii, the sleepiest state, where only 56.1 percent of adults reported getting that much sleep on a regular basis.

In fact, the Great Plains states had, overall, the highest percentages of well-rested adults of any region in the country, while the lowest percentages were primarily found in southeastern states and in those along the Appalachian Mountains.

Those low-sleep states also tend to be the same ones that have the highest prevalence of obesity, diabetes, and premature death from heart disease and stroke, the CDC researchers point out.

If you want to improve how long you sleep each night, the CDC researchers recommend

To identify possible habits that might be interfering with your sleep, the researchers also suggest keeping a 10-day “sleep diary.” This journal should include not just when and how long you slept during each 24-hour period, but also such sleep-affecting behaviors as exercise, alcohol use and caffeine consumption.

A sleep journal, the researchers add, is also helpful to have in hand when discussing any concerns about your sleep patterns with your doctor.

FMI:  The study was published in the Feb. 19 issue of the CDC’s Morbidity and Mortality Weekly Report. For more information and tips about getting a healthful night’s sleep, try the National Heart, Lung and Blood Institute‘s guide on the topic.