Falls were the most common medical mistake that led to serious harm or death in Minnesota’s hospitals last year, according to a report released Friday by the Minnesota Department of Health (MDH).

Of the 316 “adverse health events” that hospitals reported to the MDH during the period covered by the report — October 2014 to October 2015 — 67 were preventable falls. Four of those patients died.

Still, the total number of hospital falls that resulted in injury or death in 2015 was lower than it has been in more than a decade.

“We had 10 deaths from falls two years ago,” Rachel Jokela, director of MDH’s Adverse Health Events Program, told MinnPost. “It seems like we’re being able to prevent the injury severity from those falls.”

“Hopefully,” she added, “we’ll see another improvement next year, and we’ll continue the downward trend.”

Now in its 12th year, the MDH’s “adverse events” report is an annual accounting of medical errors that was mandated by the state legislature in 2003. The report is designed to help health officials and hospitals figure out where and why errors are occurring — and then take specific steps to reduce those errors going forward.

Last year, for example, to help reduce falls in Minnesota’s hospitals, the MDH and the Minnesota Hospital Association commissioned Michael Graves Architecture and Design and the St. Paul-based Pope Architects to make recommendations on how hospital bathrooms (where most falls occur) might be more safely designed.

“They went to a lot of hospitals and looked a hundreds of bathrooms,” said Jokela.

The architectural firms came up with a long list of suggestions for redesigning the bathrooms, including many low-cost ones, such as changing the toilet seats to black so that they will contrast with the white walls and floors — and be more easily seen by patients. 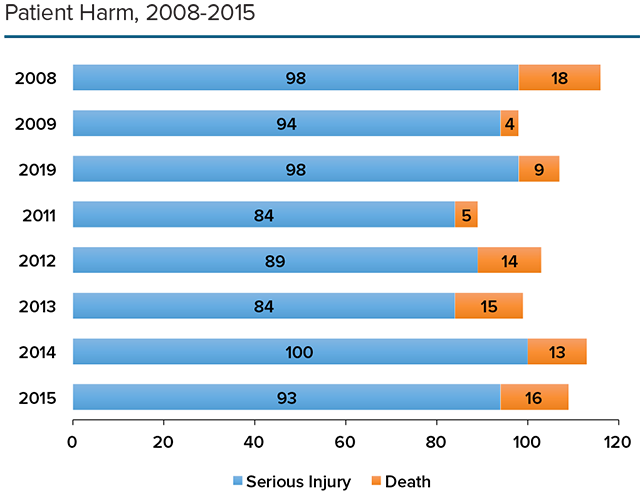 New steps were also taken in 2015 to reduce the incidence of pressure ulcers, or bedsores, which make up more than a third (104) of all the reported medical errors in 2015. Although not life threatening, bedsores are very painful for patients.

Most of the reported bedsores occurred as a result of patients lying too long on their back. With that in mind, the Minneapolis Hospital Association adopted a new “Safe Skin” turning schedule in 2015 that eliminates the back, or supine, position altogether, because patients often end up on their backs on their own throughout the day.

“We’re looking at reducing that time that the patient is sitting or lying on their back as much as humanly possible,” including the use of “micro-turns” for patients whose medical condition makes it difficult to keep moving them, said Jokela.

Here are two other key findings from the report:

•  There were 10 serious injuries and four deaths from medication errors in 2015 — the highest number in the 12 years of the report. Although those numbers are relatively small given that millions of patients are prescribed drugs each year in Minnesota’s hospitals, they are still very troubling, said Jokela.

Many medication errors occur when patients are being discharged from the hospital, she added. Health officials are currently developing a statewide, standardized process for making sure patients receive correct prescriptions upon discharge from the hospital. The new process should be ready for dissemination in the summer, said Jokela. 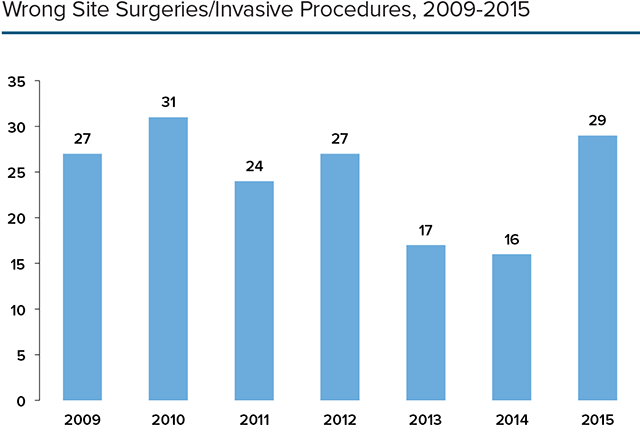 Although these mistakes are relatively rare — one in every 94,000 procedures — they are still concerning, particularly as hospitals have a safety process available to them, known as “Time Out,” that’s designed to eliminate such errors. The process involves the entire surgical team pausing before the procedure to go through a checklist, which includes identifying the patient by name and stating the type of procedure that is going to be done — and exactly where on the body it will be performed.

The MDH report notes that all the steps of the “Time Out” process were completed in only 68 percent of the wrong-site surgeries and procedures reported in 2015.

“You can say that something is in place at a facility, but is it really in place for every patient, every procedure, every time?” said Jokela.

In the coming year, she added, MDH and the Minnesota Hospital Association will be doing more auditing of the “Time Out” process in hospitals to help ensure that medical teams are more diligent about following it.

FMI: You can download and read the entire adverse events report through the MDH website. The report includes a hospital-by-hospital breakdown of all the reported medical errors. Minnesota, by the way, is one of 30 states that produce such a report, but it is only one of five that make its report public.

‘This is about fighting a war’: former Medicare administrator Andy Slavitt on what to expect in the months to come

Amid COVID-19 uncertainties, Minnesota colleges are trying to hang on to prospective students

A simple guide to safe social distancing when getting some exercise