Menstruation has been in the news a lot lately.

There’s the ongoing movement to eliminate the sales tax on tampons and sanitary pads, based on the argument that these products are essential to women’s health.

So far, eight states — including Minnesota — and the District of Columbia have agreed and repealed the tax.

A national campaign is also under way to make tampons free in restrooms — or, at the very least, in restrooms in public buildings and schools.

As the leader of that campaign told New York Times reporter Roni Caryn Rabin, “Tampons and pads should be treated just like toilet paper — they’re the equivalent. … Menstruation is a normal bodily function, and it should be treated like that.”

And then there are the women who are advocating for painful menstrual periods to be recognized as a medical condition — one that would give them full access to medical marijuana.

Among those women is Whoopi Goldberg, who announced earlier this year that she’s launching a medical-marijuana company with “cannabis edibles, tinctures, topical rubs, and a THC-infused bath soak” designed to relieve menstrual cramps and bloating.

One of the more interesting menstruation-related news items that have crossed my desk in recent weeks, however, is a medical review article in a journal called npj Microgravity that explores the options for astronauts who want to avoid menstruating while in space.

In the article, Dr. Varsha Jain, a British “space gynecologist” (her term) and researcher at the Center of Human and Aerospace Physiological Sciences at King’s College London, discusses all such options for astronauts, from taking sufficient quantities of sanitary products with them into space to suppressing their menstrual periods with a long-acting reversible contraceptive (LARC), such as an intrauterine device (IUD) or a contraceptive implant.

Although stressing that astronauts need to make their own decision about the matter, Jain seems to suggest that LARCs make the most sense, both practically and medically, at least for long space trips.

“There are no rules or regulations surrounding what a female astronaut should do about her period — it is a completely personal choice,” Jain writes in an essay published online in the Conversation on the same day as the journal article. “Some female astronauts have felt menstrual suppression is not suitable for them and therefore have chosen to menstruate in space. However, when making the decision a female astronaut may want to consider some of the challenges of getting periods in space. These tend to be related to the practicalities of hygiene — wash water is limited and changing sanitary products while floating in space would also be quite a task.”

At the start of the U.S. space program, menstruation was used as an argument for why women shouldn’t be astronauts, Jain adds. Part of that argument was health-related: NASA’s medical experts worried that weightlessness would cause retrograde menstruation, the flowing of menstrual blood back into the body. Retrograde menstruation is believed to be a cause of endometriosis in earthbound women.

But weightlessness does not have that effect. “Studies have shown that women can have periods as normally in space as they do on Earth,” writes Jain.

In a 2010 interview, former astronaut Margaret Rhea Seddon, who joined the NASA space program in 1978, described how she and other women in the program were asked about what should be done about menstruating in space. 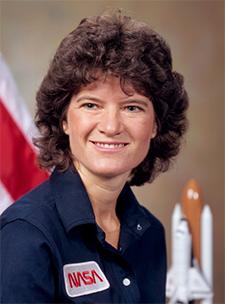 “I’m not totally sure who had the first period in space,” she added, “but they came back and said, ‘Period in space, just like period on the ground. Don’t worry about it.’”

Sally Ride, the first American woman in space, also recalled with some amusement an early discussion she had with NASA engineers, who were clueless about how many tampons a woman would need during a one-week spaceflight. They wondered if 100 would be a “safe” number.

“No,” she told them. “You can cut that in half with no problem at all.”

Certainly the oddest story I’ve read recently about menstruation appeared this week in the Washington Post. Reporter Lia Kvatum learned about the now-defunct “Museum of Menstruation and Women’s Health,” a collection of “all manner of tampons, maxi pads, menstrual underwear, pain relievers, advertisements, booklets about menstruation and, yes, douching supplies.”

The collection is now packed in boxes in the New Carrollton, Maryland, basement of the museum’s founder, 73-year-old Harry Finley.

Yes, it is a bit peculiar that a man has apparently devoted much of his time over the past 30 years to amassing and curating these objects. But putting that aside, the items offer a fascinating look at the history of the social norms — and taboos — surrounding menstruation.

Here are a few of Kvatum’s descriptions of items in the collection:

Homemade reusable pad (probably Italian, probably from the late 19th or early 20th century). Once, women fashioned their own products such as these cloth pads, which were meant to be washed and used again and again. The first commercially available disposable pads in the United States were made by Johnson & Johnson in 1896, but they were not popular because they could not be advertised. The product was eventually discontinued.

Fax tampons. Homemade tampons have been around for centuries. Fax tampons were some of the first commercially marketed tampons, probably from the late 1920s or early 1930s. These beauties were made of an absorbent material wrapped in gauze; they had no applicator and no string. Packaging information reminds readers that using a Fax tampon does not interfere with urination, as they are indeed separate orifices for menstruation and urination, and tampons are appropriate for “young or unmarried girls.”

Menstrual (or “sanitary”) apron. Menstrual aprons were worn under a dress or skirt as barrier protection. A 1922 ad from the Venus Sanitary Service enthuses that barrier products are “Indispensable for Travel, Automobiling, Athletics, Emergency Uses.”

Kotex sanitary belt.  If you’re a woman younger than 40 or a man of any age, you will likely be mystified by the so-called “sanitary belt.” Before self-adhesive menstrual pads of the 1970s, disposable pads had tabs at each end which were attached to a belt like this one. Such words as “sanitary,” “fresh” and “dainty” frequently were used to describe products because, as [Elizabeth] Kissling explains in her book “Capitalizing on the Curse: The Business of Menstruation,” “one must keep menstruation concealed, to present one’s carefully constructed front of femininity from becoming damaged by the stain of menstrual pollution.”

“There is something uniquely taboo about menstruation, much stronger than norms around reproduction or women’s bodies,” Chris Bobel, an associate professor of women’s studies at the University of Massachusetts and the president of the Society for Menstrual Research,” told Kvatum. “We have a very uncomfortable relationship with women’s bodies, and we see menstruation as a problem that needs to be hidden or fixed.”

If all this recent media attention on menstruation is any indication, however, today’s young women are not worried about hiding the fact that they menstruate (perhaps because their baby boomer mothers threw them a party to celebrate their first menstrual period?).

That’s a welcomed change. All too often, menstruation has been treated in the media and elsewhere as a kind of “eew” topic, one that shouldn’t be discussed in polite company — or anywhere except in women’s magazines.

It’s also been used all too often to deny women opportunities or to demean them — as demonstrated by Republican presidential frontrunner Donald Trump’s “blood coming out of wherever” comment about Fox News Channel anchor Megyn Kelly after a televised debate last year.

Kvatum reports that Finley is looking for someone to take over his museum and its collection.

Maybe he should ship it to the Trump Tower.

FMI: You can read Varsha Jain’s review article in full at the npj Microgravity website. It’s a sluggish read, however. Her essay in the Conversation is more accessible and offers more background information.

Breaking the taboos about menstruation