Pretaping specific areas of the feet with common, inexpensive surgical paper tape can significantly reduce the development of blisters in ultramarathon runners, according to a study published recently in the Clinical Journal of Sport Medicine.

But even if you don’t run marathons — or run at all — this finding may be helpful.

“Blisters happen to everyone, from the casual jogger to those training for a charity walk, backpackers, those with a new pair of dress shoes or soccer cleats, and, yes, even elite ultramarathon racers,” wrote Dr. Grant Lipman, the study’s lead author and an emergency medicine physician at Stanford Health Care in California, in an e-mail exchange with MinnPost.

Blisters are also a persistent problem for active duty military personnel, affecting almost 60 percent of trainees and 33 percent of troops serving during any 12-month period of deployment.

In fact, it was the military’s experience with blisters that led Lipman to conduct this new study.

“I was inspired to find a cheap and easy solution to blister prevention after meeting several military doctors over the years who would lament at the state of their recruits’ feet, and were looking for affordable options,” Lipman noted in his e-mail. “Anecdotally, I knew paper tape worked, so we set out to prove it with rigorous scientific method.”

Blisters are the result of friction between the skin and another object. Repeated sliding at a friction point causes exfoliation of the skin, which in turn creates a feeling of warmth — the “hot spot” that is an early sign of blister formation. If the rubbing continues, the “between cells” at the hot spot will fill up with fluid — and become a painful, full-fledged blister.

Many blister-prevention methods have been tried over the years, including powders, antiperspirants, lubricants, tapes and adhesive pads, but solid evidence that any of these methods actually worked has been scant.

For the current study, Lipman and his colleagues recruited 128 runners who had signed up for the 2014 RacingThePlanet 155-mile, six-stage ultramarathon race, which takes participants through the Gobi Desert in China as well as deserts in Chile, Jordan and Madagascar. These runners ranged in age from 22 to 63, and came from various countries around the world.

The tape — 1-inch-wide Micropore surgical tape made by the Minnesota-headquartered 3M company  — was applied by trained medical assistants to one of each of the runners’ feet. The other foot thus served as a control. (A coin toss determined which foot would be taped.) If the runner had a history of blisters, the tape was applied to those areas of the foot. If they had no such history, it was applied to randomly selected areas.

The medical assistants followed the runners through all seven days of the event, although the participants could also reapply the tape at any time during the race.

A total of 109 runners were able to stay compliant with the study’s protocol throughout the entire race. The most common reason for not being compliant was the tape not sticking to the foot.

(Despite this problem, Lipman and his colleagues point out that stickier tape is not necessarily a better solution. “There is a benefit of the weak adhesive quality of paper tape in that it minimizes the possibility of unroofing a blister upon its removal,” they write.) 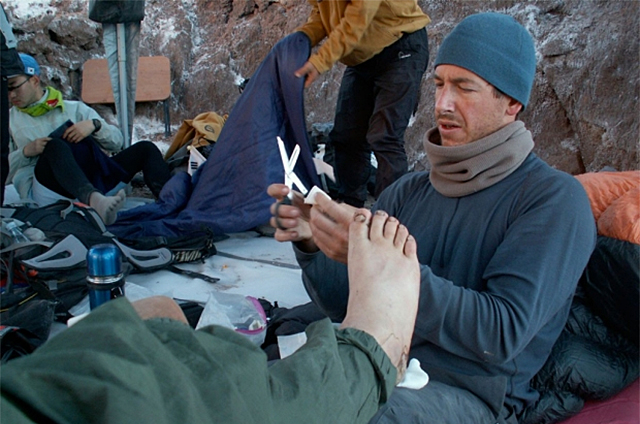 Courtesy of Grant S Lipman, MD
Dr. Grant Lipman attends to a blister during a race in the Atacama Desert, in Chile.

Even when the noncompliant runners were included in the study’s results, however, the taping was found to significantly reduce the formation of blisters. Only 30 of the 128 runners developed blisters where the tape had been applied, while 81 of them developed the sores in untaped areas.

“We found that paper tape worked in 77% of applicants,” Lipman noted in his e-mail to MinnPost. “It decreased blisters in those individual’s blister-sensitive areas by 40%, and interestingly, we found that when a blister did occur on some other part of the foot, it would occur significantly later on in the race.”

Inexpensive and easy to use

Lipman recommends pretaping to anyone who is prone to getting blisters.

Surgical paper tape is inexpensive, easy to purchase (at any drugstore) and easy to use. It’s also hypoallergenic, he pointed out.

“In treating 1000s of ultra runners over the last 10 years, I have never seen or heard of an allergic reaction to it,” Lipman added. “That being said, if you do have an allergy to either the adhesive or the material of paper tape, you should check with your doctor before using it. Also, [you] likely shouldn’t use it in the toes if you wear ‘Injinji’ style socks.”

FMI: You’ll find an abstract of the study at the Clinical Journal of Sport Medicine’s website, but the full study is behind a paywall. Details about the taping technique (and about treating blisters) can be found in Lipman’s book, “The Wilderness First Aid Handbook.” (The print version of the book is apparently entirely waterproof.)