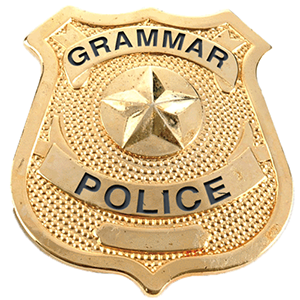 As a die-hard descriptivist, I’m always amused when the “grammar police” get into a hissy fit on Facebook or some other social media platform about a perceived grammar infraction that they’ve spotted in a piece of writing by either an individual or institution that they think should know better.

Much of the time, it’s not an infraction at all, but just a “rule” that the grammar police learned from a misguided high school teacher. For sentences can end in a preposition, and infinitives can be split. And, yes, you can start sentences with a coordinating conjunction.

Yet even if the infraction is an error according to all current grammar texts, that doesn’t mean it will always be treated as one. For the English language — including its written version — is constantly evolving and changing (thank goodness). A recent case in point: We seem finally to be returning to an acceptance of the gender-neutral their as a singular pronoun.

Hopefully (ahem), the lingering skirmishes in that particular grammar battle will soon be over.

Or maybe not. For, according to a study published recently in the journal PLOS One, how we react to both spelling errors and grammar mistakes appears to be determined more by our personality than by what would seem to be more obvious factors, such as age or education.

And agreeableness, I can smugly report, is the personality trait that was found to be most associated with being less judgmental about grammar errors.

“This is the first study to show that the personality traits of listeners/readers have an effect on the interpretation of language,” said Julie Boland, the study’s lead author and a professor of linguistics and psychology at the University of Michigan, in a released statement.

For the study, Boland and her co-author, Robin Queen, enlisted 83 participants (recruited from the website Amazon Mechanical Turk) and asked them to read e-mails, which they were told had been written by college students in response to an ad for a housemate. The responses were either written perfectly or contained one of two kinds of errors: typos (such as teh for the) or obvious grammatical errors (your for you’re).

Here’s an example of one of the e-mails:

Hey! My name is Pat and I’m interested in sharing a house with other students who are serious abuot (about) there (their) schoolwork but who also know how to relax and have fun. I like to play tennis and love old school rap. If your (you’re) someone who likes that kind of thing too, maybe we would mkae (make) good housemates.

The study’s participants were then asked to rate the writers of the e-mails in terms of their perceived intelligence, friendliness, trustworthiness and other attributes, including how good they would be as a housemate.

They were also asked if they had noticed any typos or grammatical mistakes in the e-mails, and if so, how much it had rankled them.

An analysis of all that data revealed that, overall, e-mails with typos and grammatical errors — but particularly typos — had a negative effect on how willing the participants were to accept the author of the e-mail as a housemate.

That finding was not unexpected.

But Boland and Queen also discovered individual differences in the participants’ tolerance of the errors, and these differences were surprising. They had nothing to do with demographics — age, gender or education — but instead seemed determined by personality.

The people most likely to take a harsh, judgmental view about grammatical errors were those who scored on the lower end of agreeableness.

And when it came to judging people based on their typos, people with introverted personalities were more likely to do so than those with extroverted ones. People who were more conscientious and less open were also more sensitive to typos.

“We hadn’t quite anticipated that introversion would have the effect it had,” Queen told Guardian reporter David Shariatmadari. “I found myself asking: this is weird — why would it be the case that introverts care more?”

“My guess is that introverts have more sensitivity to variability,” she added. “Maybe there’s something about extroverts that makes them less bothered by it. Because extroverts enjoy variability and engaging with people. They find that energizing. This could be an indirect manifestation of that.”

Not the last word

Yes, yes. This study comes with all sorts of caveats. Most notably, it involved only a small number of people, and all of them were recruited through a single, online source.

But, hey, the findings are fun (and kind of satisfying), nevertheless.

Now, if the grammar police would just stop insisting that the Oxford comma is the only correct way to punctuate a list within a sentence. …