During the past 25 years, the teen birth rate in the United States has plummeted 61 percent, reaching an all-time low in 2014, according to a report released Thursday by the Centers for Disease Control and Prevention (CDC).

The fall in the teen birth rate has been particularly dramatic during the past decade, dropping 41 percent between 2006 and 2014. It has occurred in all regions of the country — including here in Minnesota — and among all racial groups, although the rates are down the most among Hispanic and black teens.

Between 2006 and 2014, the birth rate among Hispanics aged 15 to 19 fell 51 percent, while the rate among black teens dropped 44 percent. Among white teens, the decline was 35 percent.

Even so, the teen birth rate remains about twice as high for Hispanics and blacks as it does for whites, although the gap is narrowing. The birth rate ratio for Hispanic teens compared with white teens declined from 2.9 to 2.2 during the period of the study, and for black teens it decreased from 2.3 to 2.0.

In some states, however — including Minnesota — birth rates among Hispanic and black teens are more than three times as high as those of whites.

Many of the social factors associated with teen births, such as limited opportunities for education and employment, are more common in communities with higher proportions of racial and ethnic minorities, the authors of the CDC report point out.

Overall, though, Minnesota has done better than most other states — and the country as a whole — at lowering its teen birth rate.

And many states, particularly those in the South and Southwest, had rates that were more than twice as high as Minnesota’s. (Arkansas had the highest rate: 41.5 per 1,000.) 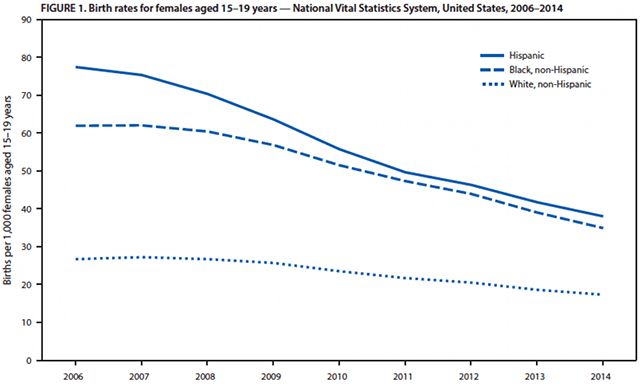 But, as already noted, Minnesota’s racial and ethnic differences were among the highest in the country — even though the state also had some of the most precipitous declines in the country in each category.

The findings from the new report “underscore that the solution to our nation’s teen pregnancy problems is not going to be a one-size-fits-all. Teen birth rates vary greatly across state lines and even within states,” said Lisa Romera, a CDC health scientist who was the lead author of the report, in a released statement.

As she and her co-authors point out, teen pregnancy and childbirth costs U.S. taxpayers an estimated $9 billion annually. Teen pregnancies also pose health risks for both the mother and baby. Teen mothers are more likely than women in their 20s or 30s to develop high blood pressure and preeclampsia, which can be life-threatening. And babies born to teen mothers are more likely to be born prematurely and to have a low birth weight.

To reduce the teen birth rate (and the health risks and costs associated with it) even further — public health officials at the CDC and elsewhere are focusing on community-wide, evidence-based, teen pregnancy prevention programs. Those programs include reproductive health services, including access to effective contraception.

FMI: The report was published in the April 29 issue of the CDC’s Morbidity and Mortality Weekly Report.

Teen birth rate plummets, including in Minnesota, to all-time low