The screening is part of a three-year initiative by the University of Minnesota School of Nursing to build awareness and increase screening and treatment for the disease in Greater Minnesota. The initiative has been funded by a grant from the Margaret A. Cargill Foundation.

PAD, which is related to coronary artery disease, is caused when a buildup of plaque (atherosclerosis) narrows the arteries and reduces blood flow in the body’s extremities, usually the legs.

The most common symptoms of PAD are pain, tiredness or cramping in the muscles of the legs or hips while walking or climbing stairs (known as claudication). These symptoms usually disappear once the person sits down and rests.

“PAD is a debilitating chronic condition that is often ignored,” said Diane Treat-Jacobson, director of the initiative and a professor of nursing at the U of M, in an interview with MinnPost.

It’s also an underdiagnosed condition, partly because many people in the early stages of the disease have mild or no symptoms, but also because people mistake the symptoms for a normal sign of aging.

Ignoring PAD — even when it’s asymptomatic — can be dangerous, she said.  People with the disease are at increased risk of dying from a heart attack or stroke. They’re also at greater risk of developing nonhealing wounds on the legs that may lead to amputation.

About 8 million Americans have PAD, including 12 to 20 percent of people aged 60 and older, according to the Centers for Disease Control and Prevention (CDC).

But only about 25 percent of U.S. adults are aware of the disease, the CDC also reports.

Because PAD is a progressive disease, early diagnosis and treatment is especially important. 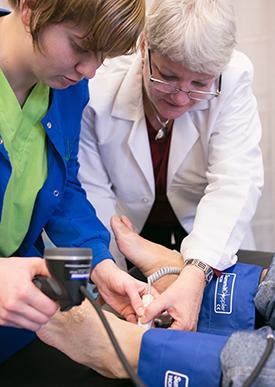 The National Heart, Lung and Blood Institute (NHLBI) recommends that people — even those without any symptoms — ask their doctor about being screened for PAD if they are aged 70 or older, if they are aged 50 or older and have a history of smoking or diabetes, or if they are younger than 50 and have diabetes or other risk factors for atherosclerosis.

The idea that all asymptomatic people should be screened is not without controversy, however. In 2013, the United States Preventive Services Task Force (USPSTF) concluded that there was insufficient evidence to support using the ABI for screening for PAD in asymptomatic people who have not been diagnosed with either heart disease or diabetes.

The free screening that is being offered by the U of M initiative in Fergus Falls on Thursday — and in other outstate communities later in the year — is focusing on people who are symptomatic and over the age of 65, said Treat-Jacobson.

Treatment for PAD includes lifestyle changes — quitting smoking, heart-healthy eating and physical exercise — as well as medications to manage any risk factors the patient may have, such as high blood pressure and high cholesterol.

“There are medications that we can give patients that help the platelets in the blood be more slippery so that they will slide more easily through narrow areas — an aspirin a day, for example, and some other medications,” said Dr. Joan Lunzer, an internal medicine specialist who has been helping to implement the U of M initiative at the Stevens Community Medical Center in Morris, in an interview with MinnPost.

The key to treatment, however, is exercise, even if it causes some initial pain, Lunzer stressed. Working the leg muscles causes arteries to enlarge and new blood vessels to grow into the areas of the legs that have less blood flow.

“We tell them to walk until it hurts,” said Lunzer. “Try to push through it a little bit, then rest. Usually within a few minutes the pain goes away in the legs as the circulation catches up with the oxygen demand in the muscle. Then we have them walk again and keep doing that. So they’re walking and stopping, and walking and stopping. Typically, they get farther over time. The distance to the first stop gets less and less.”

In addition to the free screening in Fergus Falls on Thursday, Treat-Jacobson and her team will be in Morris on Friday to train nurses and other clinicians on how to do ABI screening.

Last fall, during its first year, the initiative trained 30 providers and screened 150 people in Fergus Falls, Morris and Elbow Lake. It will be expanding to additional rural Minnesota communities later this year.

“People in rural Minnesota often don’t have the access to [health] education and resources that might be found in an urban area,” said Treat-Jacobson.

Raising public awareness — getting people to realize that leg pain is not a natural part of aging — is central to the education effort.

“We’re going to put posters up in the exam rooms asking, ‘Do you have leg pain when you walk?’” said Lanzer. “We’ll then see how many patients point to the fliers and say, ‘I may have that.’ We had similar fliers for restless leg syndrome, and those worked.”

“We’re still early in this program,” she added. “We’ve done one quick screening in the community. I think that if we can get more of those done and train more nurses, we’ll get a lot more awareness. And then maybe we can prevent somebody’s first heart attack, somebody’s first stroke.”

FMI: You’ll find more information about the U of M’s PAD Prairie Initiative on its School of Nursing website. The dates and locations of free screenings being offered in June will be posted on the website early in May, said Treat-Jacobson. General information about the prevention, symptoms, diagnosis and treatment of PAD can be found on the NHLBI’s website.