The suicide rate in the United States rose 24 percent between 1999 and 2014, according to a somber report released late last week by the Centers for Disease Control and Prevention (CDC).

The increase occurred among both men and women and among every age group between 10 and 75, although the proportion of the increase was greatest for girls aged 10 to 14 and for men aged 45 to 64.

As Sally Curtin, a statistician at the National Center for Health Statistics and the lead author of the report, told CNN, the widespread nature of the findings present a significant challenge to health officials and others working on suicide prevention.

“If it were just one particular group, you could say ‘that is where we need to focus,’ ” she said.

The official number of people in the U.S. who took their own lives in 2014 was 42,773, making suicide the country’s 10th leading cause of death.

During the 15 years before 1999, the U.S. suicide rate had been declining. But in 1999, according to the new report, rates began to rise at an annual pace of about 1 percent — which then doubled to 2 percent after 2006.

That post-2006 rate likely reflects, at least in part, the severe economic hardships of the past decade.

“People [were] growing up with a certain expectation … and the Great Recession and other things have really changed that,” Julie A. Phillips, a professor of sociology at Rutgers University who studies the demography of suicide, told the Washington Post. “Things aren’t panning out the way people expect. I feel for sure that has had an effect.”

Access to firearms and the rise in the abuse of opioid drugs also appear to be key factors. According to the CDC report, firearms were the most common method of suicide death among men in 2014, although the proportion of men using firearms to end their lives decreased from 61.7 percent to 55.4 percent during the period of the study. 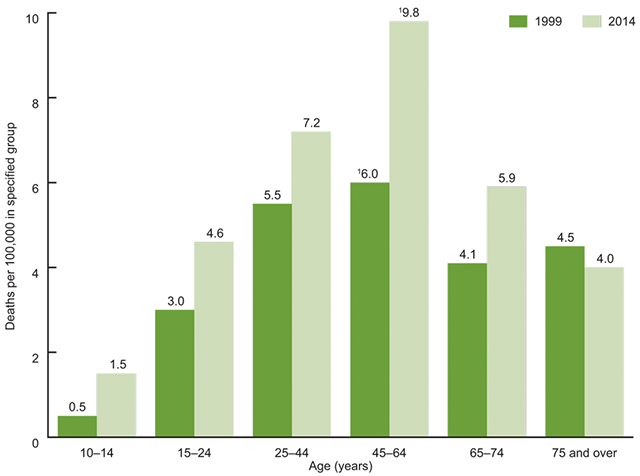 Poisoning — which has increasingly involved prescription painkillers — edged out firearms as the most common method of suicide for women in 2014, accounting for more than a third (34.1 percent) of all such deaths (compared to 31 percent for firearms).

Although guns and poisoning remain the leading methods of suicide in the U.S., more people are resorting to suffocation, including hanging. In 2014, one in four suicides was attributable to suffocation, an increase from fewer than one in five in 1999.

Here are some other findings from the CDC report:

FMI: You will find both reports on the CDC website. If you or someone you know is having suicidal thoughts, you can call the National Suicide Prevention Lifeline (1-800-273-8255) at any time of day or night, or you can use the online Lifeline Crisis Chat. Both are free and confidential, and will connect you to a trained counselor.