Unless medically warranted, following a “gluten-free” diet is not only a waste of money, it can also be unhealthy, according to a commentary published recently in the Journal of Pediatrics.

Yet, millions of Americans have gone “gluten-free” out of a mistaken belief that it is a healthier dietary choice for themselves or their children, writes Dr. Norelle Reilly, a gastroenterologist and director of the Celiac Disease Center’s pediatric program at Columbia University in New York City.

We are certainly in the midst of a huge gluten-free diet fad. In 2015, 25 percent of Americans reported that they had purchased gluten-free foods, and U.S. sales of such products totaled $11.6 billion, up 136 percent from what was spent just two years earlier.

But when 1,500 American adults were surveyed last year about why they were buying gluten-free foods for themselves and their families, the most common answer  — the one given by 35 percent of the respondents — was “no reason.”

Only 8 percent said they were avoiding gluten — a protein found in wheat, rye, barley, spelt and triticale (a hybrid of wheat and rye)  — because they were “sensitive” to it.

Even among those 8 percent of respondents, however, it’s unlikely that many had received any kind of “sensitivity” diagnosis from a medical professional. As Reilly explains in her commentary, the only people who must always avoid gluten are those with the autoimmune disorder celiac disease. When people with celiac disease eat gluten, their body launches an immune response that inflames and damages their intestines and keeps essential nutrients from being absorbed.

Celiac disease is relatively uncommon, however, affecting an estimated 1 in 133 people in the U.S., or about 3 million Americans in all.

There are other people who are allergic to wheat (but not gluten), says Reilly. And some evidence suggests, she adds, that another small percentage of adults may have a poorly understood condition known in medical circles as non-celiac gluten sensitivity (NCGS), but more commonly as “gluten intolerance.” 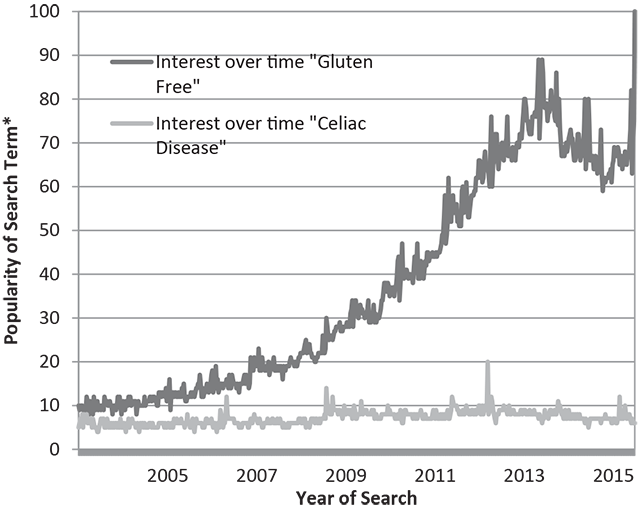 But Australian researchers reported last year that self-diagnoses of gluten intolerance seem to result from the “nocebo response”: People expect to feel worse when consuming gluten, and thus they do. The researchers also suggest that people may be mistakenly blaming gluten for symptoms caused by FODMAPs, non-gluten molecules in foods that can trigger gastrointestinal discomfort.

But — according to the 2015 survey — most people who have jumped on the gluten-free dietary bandwagon seem to be doing so not because of any real or perceived symptoms, but because they believe it offers a healthier lifestyle. They also believe it has no disadvantages.

That is simply not true, says Reilly.

Unless someone has celiac disease or a medically confirmed case of wheat allergy or NCGS, “there is no data supporting the presumed health benefits” of a gluten-free diet, she writes.

“In fact,” she adds, “the opposite may be true in certain cases, particularly when the diet is followed without the guidance of an experienced registered dietitian or physician.”

Indeed, researchers have described increased rates of obesity and metabolic syndrome among people who adopted a gluten-free diet, she reports. Studies have also found, she says, that people who follow a gluten-free diet tend to take in significantly fewer nutrients, such as folate, thiamine, and iron, than people who didn’t make the switch.

In addition, many gluten-free products replace grain with rice, which is a concern, particularly for parents, because of the elevated levels of arsenic found in rice. The American Academy of Pediatrics recommends that parents limit their children’s exposure to rice by offering them a wide variety of foods — a goal that’s difficult to achieve on a gluten-free diet, Reilly points out.

Reilly also debunks the idea that gluten is a toxin.

“There are no data to support the theory of an intrinsically toxic property of gluten for otherwise-healthy and asymptomatic adults and children, and certain studies have specifically demonstrated a lack of toxic effect,” she says.

Reilly’s major concern throughout her commentary, however, is children. She stresses that there is no evidence to support the idea that children without a diagnosis of celiac disease or wheat allergy benefit from avoiding gluten. In fact, it could actually do harm, including social harm. Children who follow a gluten-free diet often feel socially isolated from their peers.

“Social isolation and inconvenience have been reported by children with [celiac disease] requiring a [gluten-free diet], and some report a deterioration in their quality of life while on [the diet], linked in may cases to the diet itself,” she writes.

“Health care providers may not be able to end the [gluten-free diet] fad,” she adds, “but can certainly begin to play a larger role in educating patients.”

FMI: The commentary can be read in full on the Journal of Pediatrics website.