Deaths from hepatitis C have reached an all-time high in the United States, according to preliminary data released last week by the Centers for Disease Control and Prevention (CDC).

That’s a startling 78 percent increase from the 11,051 hepatitis C-related deaths that were recorded in the U.S. slightly more than a decade earlier, in 2003.

Both studies relied on data collected from death certificates, which frequently underreport hepatitis C. So the number of deaths related to this viral infection is probably even higher, says the CDC.

Most hepatitis C-related deaths in the U.S. are among baby boomers, who are often unaware that their chances of having the disease are much greater than that for people born in earlier or later generations.

New cases of hepatitis C, however, are occurring primarily among young adults who inject drugs — particularly young, white adults living in rural or suburban areas of the Midwest or Eastern United States, according to the CDC.

The numbers reported in last week’s studies are troubling, but not surprising, said Kristin Sweet, a hepatitis expert at the Minnesota Department of Health (MDH), in a phone interview with MinnPost.

“We’ve know about the prevalence of hepatitis C in the U.S. for quite a few years,” she said. “But the fact that so many people are dying from it compared to other infectious diseases — that’s a new way of looking at it that I hadn’t thought of before.”

The CDC estimates that 3.5 million Americans are currently living with hepatitis C. In Minnesota, about 45,000 people are believed to be infected or to have been infected in the past, according to MDH officials. The median age of infected Minnesotans is 56.

Twenty-nine percent of Minnesotans with past or present hepatitis C infections live in Minneapolis or St. Paul, while another 31 percent live in the suburbs of those two cities.  The rest — 40 percent — live in Greater Minnesota.

Hepatitis C usually spreads when the blood from an infected person enters the body of someone who isn’t infected. If left untreated, the disease can lead to long-term and life-threatening health problems, including liver damage, liver cancer and liver failure. In the U.S., hepatitis C is a leading cause of cirrhosis and liver cancer, as well as the most common reason for liver transplant surgery.

Minnesota Department of Health
Persons living with past or present HCV in Minnesota by age, 2015

Half of Americans currently infected with hepatitis C are unaware that they have the disease, according to the CDC.  That’s because symptoms  — such as bruising and bleeding easily, fluid accumulation in the abdomen, swollen legs and weight loss —tend to appear only late in the course of the disease, when the virus has already done serious damage to the liver.

Today, hepatitis C is passed from person to person primarily by sharing needles or other equipment used to inject drugs, although the disease can also be spread through unprotected sex with an infected person. Another, less common method of getting infected is by receiving a body piercing or a tattoo in an unregulated — and unsterile — setting.

Before blood screening became available in 1992, the infection was commonly contracted through donated blood and transplant organs. This is one of the main reasons why baby boomers between the ages of 55 and 64 are at such great risk of having — and dying from — the disease.

The importance of screening

“Anyone born between 1945 and 1965 should get screened once, just to make sure they’re not at risk of the long-term consequences of cirrhosis and liver cancer,” said Sweet.

Anyone who has injected drugs — even once — also should be screened, she added. 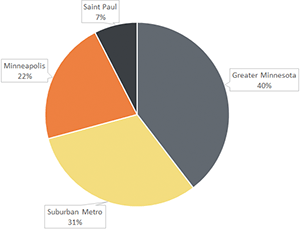 Minnesota Department of Health
Persons living with past or present HCV in Minnesota
by current residence, 2015

Screening involves a routine blood test. If the virus is found in the blood, then additional tests are done to assess damage to the liver.

Both acute (new) and chronic hepatitis C infections can be treated. The newest treatments — drugs such as Sovaldi, Harvoni, Zepatier and Viekira Pak — have a cure rate of more than 90 percent. (Previous treatments were only about 50 percent effective.) The new drugs are extremely expensive, however. A full treatment regimen can range from $54,000 to $94,000, and many insurers will not cover the cost until a patient’s liver is damaged.

Fortunately, there are signs that those costs are coming down. And when that happens, we should begin to see fewer Americans dying from this preventable — and curable — disease, according to Dr. Jonathan Mermin, director of CDC’s National Center for HIV/AIDS, Viral Hepatitis, STD, and TB Prevention.

“Once hepatitis C testing and treatment are as routine as they are for high cholesterol and colon cancer,” he said in a released statement, “we will see people living the long, healthy lives they deserve.”

FMI: You can read about the latest nationwide hepatitis C statistics on the CDC’s website, where you’ll also find information about preventing, diagnosing and treating the disease. For Minnesota’s statistics, go to the MDH website. The CDC also offers an online hepatitis risk assessment that takes only a few minutes to complete.