The possibility that Donald Trump may become president has “subconsciously” and “irrationally” changed the behavior of elite American bridge players, making them “subtly deranged” and therefore more likely to bid no-trump contracts than in the past, according to a new study.

This phenomenon is not, however, occurring among European players, the study also reports.

The authors of the study say these findings are what they expected “given the association of the game of bridge with the Democratic Party.” As proof of that association, they note that one of the liberal super PACs is called “American Bridge.” They also point out that earlier this year MSNBC-TV host Rachel Maddow described Elizabeth Warren, a Democratic senator from Massachusetts, as having a “key bridge role” in her party.

American bridge players are therefore “psychologically primed” to want to bid No Trump during their tournaments, say the researchers.

I can already hear MinnPost readers spitting out their morning coffee and shouting some, um, choice words at me across the Internets. So, before you start overtaxing MinnPost’s gentle and forbearing comment monitors with your irate messages, let me explain:

Yes, the study is real. So are its statistician-authors, Jonathan Falk of NERA Economic Consulting and Andrew Gelman of Columbia University.

The findings are real, too — at least in terms of the data that was collected and analyzed. But the findings are also quite phony. And that’s exactly why Falk and Gelman conducted this satirical study, which they presented at the International Conference on Machine Learning in New York City last Friday.

Their study is a perfect example of why correlation should not be confused with cause and effect.

It also demonstrates how such research practices as cherry-picking, p-hacking (manipulating data), and publishing only carefully selected results can mislead us into believing the result of a scientific study are somehow true.

“While this paper is satire, the methodology is a common one, the statistics are accurately reported, and for all we know, the conclusion might even be correct!” Falk told Retraction Watch. “But what concerns us is that in the quest for headline-grabbing results, the motivation to cut corners through self-delusion (if not outright fraud) by the researcher leads to what one of us [Gelman] has called ‘the garden of forking paths,’ the ability to make subtle choices along the path to publication that makes results, true or not, unreliable.”

Like all good research scientists, Falk and Gelman set out to test a theory, in this case “that Trump’s rise has irrationally changed the behavior of one group of people: elite bridge players, whom we assume are otherwise completely typical.”

Their hypothesis was that “the prospect of a Donald Trump presidency” would cause the Democratic-leaning tournament-level bridge players into being “more partial to No Trump contracts.” (If you don’t know what a no-trump contract is, you can read about it on the American Contract Bridge League’s website.)

To test this hypothesis they compared the bridge hands played in 1999 (“five years before Donald Trump even had a reality show”) and 2015 at the Vanderbilt Knockout tournament, a leading bridge event. They also compared the 2015 Vanderbilt hands with those played at the Dutch Team Championship that same year.

Garbage in, garbage out

Of course, cherry picking of data has occurred in this study. For, as Falk and Gelman point out in a footnote, they downloaded “lots more tournaments than those reported here. Future papers will address these additional databases.”

Or not (if those databases don’t prove the hypothesis). 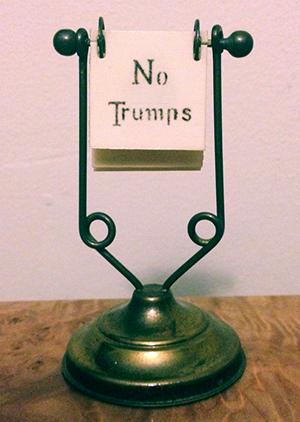 And that’s not the only data manipulation that’s going on in this study: The 2015 Vanderbilt event occurred in March, before Trump even announced his candidacy.

But, hey, write Falk and Gelman, there was plenty of “speculation” at the time that Trump would run, so using that data set is just fine.

Falk and Gelman also brush away (like the authors of many other “junk science” studies) a finding that doesn’t fit their hypothesis: the fact that the 2015 Dutch results were not significantly different from the U.S. ones.

“Since the Dutch … rate is lower than the Vanderbilt 2015 rate, we cannot reject the possibility that the subliminal influence of Trump even managed to reach the Netherlands,” they say.

Falk and Gelman also stress in their study that their most important result (the higher percentage of no-trump hands played at Vanderbilt 2015 than at Vanderbilt 1999) must be meaningful because it was statistically significant.

After all, their finding had a p-value of 0.0492, “easily passing the traditional significance level of 5 percent,” they point out.

The need for skepticism

There’s much more fun stuff in this study. For example:

We are unfortunately unable to separate the effect of Trump specifically from the fact that each bridge hand is called a “deal,” which obviously will prime for Mr. Trump’s best-known publishing effort, “Trump: The Art of the Deal” (1987), or for the association of bridge “hands” with the presidential candidate’s notoriously foreshortened digits.

This “scientific” paper is well worth the read — for its humor, yes, but more importantly for what it says about the need for all of us to bring informed skepticism to our interpretation of medical and psychological research.

FMI: Falk and Gelman have uploaded a PDF version of the paper for everyone to read. Don’t skip the footnotes.