As part of its “Long Read” series, the Guardian newspaper published a fascinating article last week on the promise — and perils — of using the human emotion of disgust to change people’s health-related behaviors.

The article, written by the British food journalist Bee Wilson, will definitely (as the Guardian’s editors predict) make you wash your hands more often and, perhaps, make you think more carefully about your food choices.

A long history of success

The use of disgust has been at the core of several successful public-health efforts over the years, Wilson reports. In the early 1900s, for example, British doctors turned the tide on devastatingly high levels of diarrhea-caused infant deaths by inundating their country with anti-fly posters. The posters contained graphic images of flies spreading disease to children, as well as images of the insects on pools of vomit, on rubbish heaps and, most effectively, on human feces.

At the time, most people in Britain (and elsewhere) were indifferent to flies, not realizing that the insects carried illness-causing pathogens.

The posters were “designed to trigger feelings of revulsion,” writes Wilson (with British spellings and punctuation). “It worked: the campaign definitely changed people’s feeling about flies. It didn’t stop infant diarrhoea overnight, but it was one of the reasons that the death rate from diarrhoea fell steadily from 1913 onwards. The anti-fly campaign saved lives.”

A century later, public-health officials launched a similar type of disgust-infused campaign in Ghana, where diarrhea accounts for 25 percent of all deaths among children under the age of 5.

Officials “designed a TV commercial showing a nice-looking young mother leaving a toilet and preparing food for her kids, using her hands to knead dough,” Wilson reports. “The film showed her with a smear of purple on her hands from the toilet. In the film, the purple passed from the mother’s hands to the food to the child’s mouth.”

Within 10 months, Ghanaians — now horrified with disgust — had increased their handwashing by 41 percent before eating and by 13 percent after using a bathroom.

As these examples show, graphic “disgust” campaigns can help change people’s behavior — and even save lives. The reason why such campaigns work may be rooted in evolutionary biology: Some scientists believe that the original function of disgust was to keep humans away from things that carry parasites or disease.

Yet health officials today are often reluctant to use disgust to get their messages across, particularly in developed countries.

A 2010 study found that, when swabbed, 28% [British] commuters had faecal bacteria on their hands. Washing with soap and water after going to the toilet and before eating is the single best way to reduce rates of gastrointestinal illness, yet estimates by the Lancet in 2003 suggested that fewer than one in five people in the world actually do it. Many in the developing world have no access to soap and running water — or toilets, come to that — but in cities such as London, where all the necessaries are abundant, hand-washing rates are still very low. [They’re low here in the U.S., too. A study conducted at the Minnesota State Fair, for example, found that 25 percent of women and 49 percent of men failed to wash their hands after using a public restroom.]

This has consequences. There are more than a million cases of food poisoning a year in Britain [and 48 million in the United States]. When we get sick, we are likely to blame it on someone else’s cooking: a dodgy curry, an iffy prawn. Yet around a third of cases of gastrointestinal illness could be prevented through observing basic hand hygiene. …

Health officials, of course, tell us to wash our hands, but that message is usually delivered in a rather sanitized — and, thus, often ineffective — way, as Wilson points out:

The majority of humans — in Britain and elsewhere — are not disgusted by their own fingers, no matter where they have been. We think about them as the late Victorians thought about flies: hardly at all. We spend a fortune on deodorant and mouthwash to create an aura of “freshness,” but neglect the basic soap and water that might prevent us getting sick quite so often. 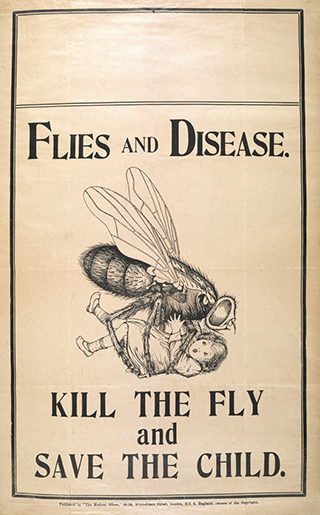 “But would the situation change if governments were bold enough to create graphic public health campaigns centred on disgust?” she asks. “And if they did, would we find them too offensive to look at?”

Nor are we disgusted with how certain foods get to our table.  “Most of us are disgusted by [eating] insects and offal, and not by other meat — mass-produced bacon, say — even though we know it is produced in conditions of cruelty and squalor,” she says.

“Disgust is an alarm system that we have become very good at switching off,” Wilson notes.

Of course, many vested interests, such as factory farms and the fast-food industry, might become upset if disgust was used to warn the public against food poisoning. Writes Wilson:

From January to March this year, analysis showed that about 79% of the chicken for sale in Britain was contaminated with campylobacter, a bacterium responsible for an estimated 280,000 UK cases [and more than 1.3 million U.S. cases] a year of a particularly vile form of food poisoning, and approximately 100 deaths. Yet, somehow, most of the population remains undisgusted by mass-produced chicken. People look at it and see nothing but “White meat”: something safe and protein-rich, served up in neat portions, in an apparently sterile plastic tray.

As [Valerie Curtis, director of the Hygiene Centre at the London School of Tropical Medicine] comments, “they take away the feathers and the shit and make it look like a pure thing.” Your senses do not tell you that this contains pathogens. “We need to listen to some kinds of disgust and not others,” Curtis says, but in the modern world, it is increasingly hard for our brains to learn the difference.

Disgust is, of course, a two-edged sword when it comes to public health, as Wilson also explains:

When home cooks neglect to wash their hands after handling raw chicken heaving with campylobacter, the problem is that they are not disgusted enough. But there are cases where we are too disgusted to do things that might have public health benefits. Drinking recycled wastewater is an example. With climate change and increasing scarcity, finding new sources of drinkable water is a pressing concern. But that might be the easy part. Persuading people to drink it is another matter.

Still, those concerns shouldn’t stop public-health officials from using the emotion of disgust when appropriate to get us to change our behaviors — no matter how queasy it makes us.

“We are now so ‘disgustable’ that we have become squeamish about disgust itself,” Wilson writes. “We live in a sanitized environment that hides from us the extent to which we still live with pathogens and other dangers to our health. Maybe the real reason we don’t use disgust more in the cause of public health — despite all the evidence that it would work — is simply because it grosses us out even to think about it.”

FMI: You’ll find Wilson’s article on the Guardian’s website. I recommend taking a look at it, even if it does gross you out a bit.

To get us to wash our hands, public-health campaigns may need to elicit more disgust