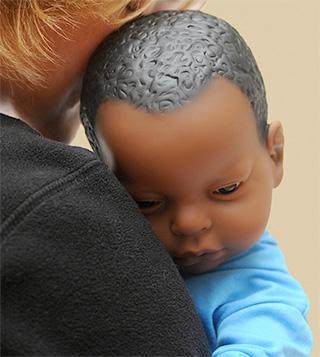 Infant simulator dolls — those high-tech, life-like computerized “babies” that are supposed to discourage teen pregnancies by giving young people a jolting reality check about parenting — don’t work, according to an Australian study published in The Lancet.

In fact, the study found the dolls had the opposite effect: They increased the risk of teen pregnancies.

Australian adolescent girls enrolled in a school-based program that used the dolls were about a third more likely to give birth or have an abortion before they reached the age of 20 than their peers who went through a traditional health-education program, the study found.

“Similar programs are increasingly being offered in schools around the world, and evidence now suggests they do not have the desired long-term effect of reducing teenage pregnancy,” said Sally Brinkman, the study’s lead author and a social epidemiologist at the University of Western Australia, in a released statement. “These interventions are likely to be an ineffective use of public resources for pregnancy prevention.”

Here in the United States, teen pregnancies have dropped dramatically in recent decades — by 41 percent during the last decade alone, according to the Centers for Disease Control and Prevention. Yet such pregnancies remain a major public health concern, for they pose serious health risks for both mother and baby. They also exact social and economic costs on young women that keep them from fulfilling their potential.

The current study was a randomized controlled trial, the type considered the “gold standard” by researchers. Brinkman and her colleagues conducted the study in 57 schools in western Australia. Twenty-eight of the schools (1,267 girls) were randomly assigned a pregnancy prevention program known as Virtual Infant Parenting (VIP), an Australian adaptation of the U.S. program Reality Works, whose baby simulator product is known as Real Care Baby or (formerly) Baby Think It Over. The other 29 schools (1,567) received a standard health-education curriculum with a sex-education component.

The girls were aged 13 to 15 at the start of the study, and were followed by the researchers until the age of 20.

At the end of the study, the researchers analyzed the data to see if there were differences in pregnancy rates between the two groups. Overall, they found that 378 (13 percent) of all 2,834 girls in the study had a pregnancy that ended in either a birth or an abortion during their teenage years.

The proportion of girls who became pregnant was significantly higher, however, in the VIP group than in the “control” group: 17 percent vs. 11 percent.

The proportion of girls who gave birth (rather than have an abortion) was also higher in the VIP group than in the control group: 8 percent vs. 4 percent.

The study had several limitations. Most notably, participation in the study was low (45 percent in the VIP schools and 58 percent in the “control” schools). It could be, therefore, that the girls who chose not to participate in either program (such participation is voluntary in Australia), have unknown characteristics that may have biased the current study’s results. Also, the study was unable to measure the incidence of miscarriages.

Furthermore, because the study involved only Australian teenagers, the findings may not be transferrable to other countries, including the United States.

Still, as Brinkman and her colleagues point out, this study “is the most rigorous evaluation undertaken so far to ascertain the long-term impact of an infant simulator-based programme and one of the very few studies to examine objective pregnancy outcomes.”

It’s an impact that worsens rather than helps the teen-pregnancy problem.

Why didn’t the simulator dolls work? In a commentary that accompanies the study, Julie Quinlivan, a health researcher at the University of Notre Dame Australia, discusses several possible reasons.

“The cure for teenage pregnancy is more difficult than a magic doll,” she writes. “We have to address both mothers and fathers. Programmes need to start in infancy. Investment in vulnerable children is needed to entice these adolescents from the path of premature parenthood into brighter futures.”

“We cannot afford the quick fix,” she adds, “especially when it doesn’t work.”

FYI: An abstract of the study and the commentary can be found on The Lancet’s website, but the full papers are, unfortunately, behind a paywall.