Not at convenience stores. Not at fast-food restaurants. Not at vending machines.

It’s at grocery stores. That’s where Americans get most of their high-sugar, low-nutrient junk food, according to a study published Wednesday in the European Journal of Clinical Nutrition.

The authors of the study say this finding challenges the “food desert” hypothesis — the idea that a lack of access in some communities to quality grocery stores (ones that sell plenty of fresh produce and other healthful foods) is a major factor behind the U.S. obesity crisis.

Supermarkets may be the largest source of healthful food, acknowledges Ruopeng An, the study’s lead author and an assistant professor of kinesiology and community health at the University of Illinois at Urbana-Champaign, in a released statement.

For the study, An and his colleagues examined data about the food choices and shopping habits of a nationally representative sample of more than 4,000 American adults who had participated in the 2011-2012 National Health and Nutrition Examination Survey. The analysis revealed that about 90 percent of the participants consumed “discretionary” foods (aka junk foods), such as cookies, pastries, ice cream, pies, candy, chips, party mixes, candy and fries, daily. Almost half drank sugar-sweetened beverages daily.

The researchers then examined where the study’s participants said they had purchased these foods. They found that more than half of the sugar-sweetened beverages and two-thirds of the discretionary foods had been bought in grocery stores.

“Supermarket purchases of these items are about two to four times as large as all the other sources — fast-food restaurants, full-service restaurants, convenience stores, vending machines and other locations — combined,” An says.

This study, like all studies, has several important limitations. The participants provided the information about the kinds of food they consumed and where they purchased them. That information may have suffered from faulty recall. Also, participants were asked to provide the information for only two 24-hour periods. Those two days may not have been representative of their usual eating or shopping habits.

Still, the findings are interesting and may help inform how we go forward with our efforts to tackle the obesity epidemic. 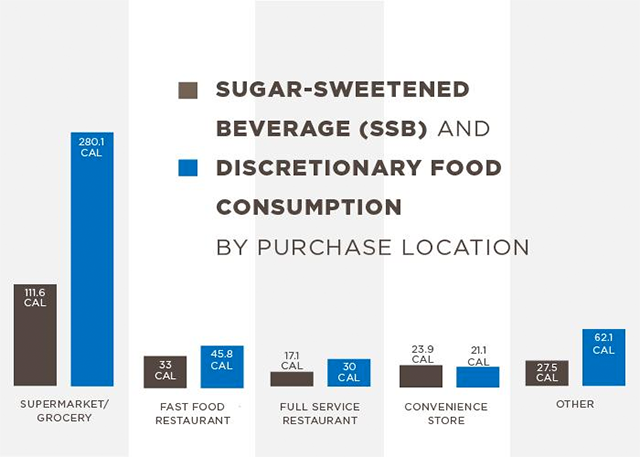 “While a lack of supermarkets and grocery stores could be a significant barrier to health food access in some highly deprived neighborhoods,” the study’s findings challenge the view that a shortage of grocery stores is “the primary driving force for reduced diet quality and the obesity epidemic at the national level,” An and his colleagues write.

“Increasing the variety of food choices, particularly fresh produce, may be a laudable goal from the perspective of consumer empowerment, but it may take more than a new supermarket or grocery store to induce a meaningful change in people’s eating habits and diet quality,” they add.

FMI: You will find an abstract of the study on the European Journal of Clinical Nutrition’s website, but the full study is behind a paywall.

A lot of junk food comes from grocery stores, not just fast-food joints and convenience stores