They’ve all published papers or studies in psychology journals, according to an intriguing (and sometimes amusing) recent article in the journal Perspectives on Psychological Science.

“We suspect,” write psychologists Scott Lilienfeld of Emory University and Steven Jay Lynn of Binghamton University, “that many readers who share our fascination with psychological trivia will be surprised and delighted to discover that several celebrities, noteworthy historical and political figures, and individuals who otherwise have achieved visibility in one field or another have published scholarly works that have enriched our collective understand of psychology. For example, many readers may not have supposed that British actor Colin Firth coauthored an article on the structural brain correlates of political orientation or that American writer Gertrude Stein penned articles on attention and motor automatism that eventually drew the attention of B. F. Skinner.”

Lilienfeld and Lynn identify a total of 78 such individuals, whose lives stretch from the late 18th century until today. The papers penned by this group covers a wide range of psychological topics, including the following: linguistic prosody, castration anxiety and penis envy, sex role and ethnic stereotypes, depth discrimination, parenting, aging, humor, sexuality, the causes and prevention of war, narcissism and celebrity, and the genetics of mental illness.

“In fairness,” say Lilienfeld and Lynn, “not all of these publications have advanced the understanding of scientific psychology, and a handful are downright dubious and almost certainly best consigned to the dustbin on scientific obscurity.”

One that fits in the latter category is a 1967 study by Eugene Landy, the shady “Dr. Feelgood” therapist portrayed by actor Paul Giamatti in the 2015 film “Love & Mercy” about Beach Boys leader Brian Wilson. As Lilienfeld and Lynn explain, Landy’s study “purportedly demonstrated that the ways in which men and women open a pack of cigarettes provide support for the psychoanalytic concepts of castration anxiety and penis envy, respectively.”

Fortunately, such ridiculousness does not dominate the list of 78 papers. “On balance, these scholarly contributions from unexpected authors, some of which are widely cited and influential, have enriched psychology and allied disciplines, such as psychiatry and neurology in largely unappreciated ways,” write Lilienfeld and Lynn.

Here are a few modern-day examples from the list:

When (recently retired) San Antonio Spurs basketball superstar Timothy (Tim) Duncan was an undergraduate at Wake Forest University, he coauthored this chapter along with social psychologist Mark Leary and two others on people’s reactions to narcissistic behaviors. The authors examined the reasons underlying egotistical individuals’ interpersonal displays, as well as the diverse range of people’s reactions to these displays. They concluded that egotism is produced and maintained by one or more of three factors: a sincere, but usually mistaken, belief that one is better than others; an attempt to create a positive impression on others; and a concerted effort to defend against deep-seated feelings of inferiority.

Colin Firth, a winner of an Academy Award and a British Academy of Film and Television Arts Award, was third author on this article on the structural brain correlates of political orientation. Firth became a coauthor after commissioning this study while serving as guest host of the United Kingdom’s Radio 4’s Today show. The authors reported that conservatism was tied to greater right amygdala volume (consistent with findings suggesting that conservatism is tied to greater sensitivity to threat; see Hibbing, Smith, & Alford, 2014), whereas liberalism was tied to greater anterior cingulate volume.

Kellerman, J. (1974). Sex role stereotypes and attitudes toward parental blame for the psychological problems of children. Journal of Consulting and Clinical Psychology, 42, 153–154.

Jonathan Kellerman, the bestselling author famous for his suspense novels featuring child psychologist Alex Delaware, received his doctorate in clinical psychology from the University of Southern California in 1974. He authored this article on the attribution of the causes of blame for psychopathology. The findings revealed that undergraduates tended to blame fathers primarily for psychological problems deemed to be “masculine” and blamed mothers primarily for psychological problems deemed to be “feminine.”

Academy-Award-winning American actress Natalie Hershlag, who later adopted the stage name of Natalie Portman, was a psychology major at Harvard University when she coauthored this article with several prominent researchers, including psychologist Jerome Kagan, on brain imaging correlates of the development of object permanence in humans. The authors reported that prefrontal cortical activity is related to the emergence of object permanence. 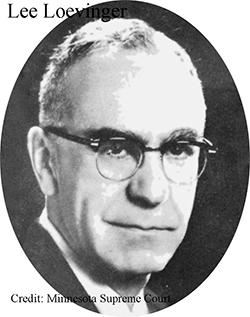 Lee Loevinger was an esteemed attorney and judge who served on the Minnesota Supreme Court. A member of the Federal Communications Commission, he is considered by many to be the “father of the 911 area code” because he argued forcefully — and successfully — that AT&T should institute a universal number for responding to emergencies. He was also the brother of Washington University psychologist Jane Loevinger, known for her influential writings on ego development (for which she constructed a widely used sentence completion test) and on psychometrics, particularly construct validity. In this article, Loevinger contended that the mass media, including television, radio, and magazines, act as “mirrors,” reflecting the ideas, emotions, views, and other psychological attributes of their audience. Like his sister, he underscored the psychological importance of the ego, emphasizing the individual’s projection of the self when reacting to media broadcasts: The listener, he proposed, “projects his own ego into what he sees or hears and is frequently dissatisfied when he finds the picture unflattering.”

For more information: Lilienfeld and Lynn’s paper is available in full on the Perspectives on Psychological Sciences website. So you can browse through the contributions of all 78 individuals and decide for yourself which are dubious and which are not.