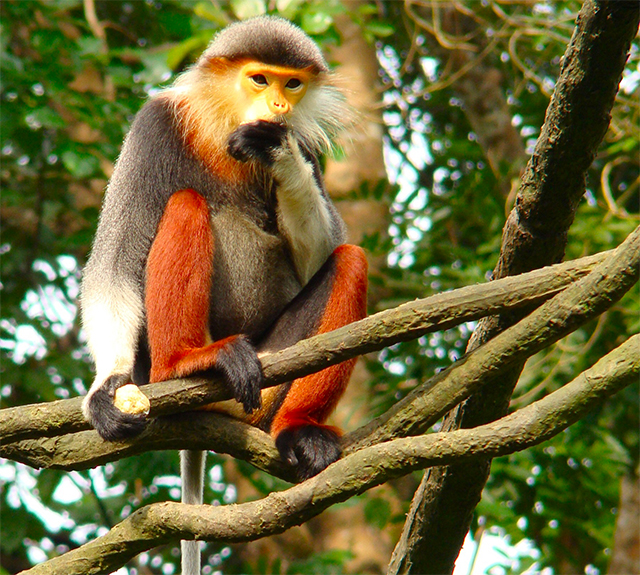 Monkeys living in captivity develop microbiomes — communities of bacteria and other microbes in their guts — that diverge significantly from those of their wild counterparts and resemble instead the gut microbes of humans, according to a University of Minnesota study published last week in the Proceedings of the National Academy of Sciences (PNAS).

A change in diet appears to be the primary cause of the monkey’s altered gut microbes. Monkeys in captivity consume significantly fewer fibrous plants than they do in the wild. Indeed, the U researchers report that while wild red-shanked doucs — one of the types of monkey they studied — eat up to 57 different plant species, captive doucs are sometimes fed only one. They also found that the feces of wild doucs contain up to 40 percent plant DNA, while that of captive doucs has almost none.

Both red-shanked doucs and mantled howler monkeys, the other primate studied by the U researchers, are considered endangered. They also don’t survive well in captivity. The study’s findings may lead, therefore, to improvements in the conservation of these animals.

But the study also has implications for another group of primates — humans. Microbiome changes associated with the modern, low-fiber Western diet have been linked in recent years to the development of obesity and many chronic diseases, including diabetes and Crohn’s disease.

To learn more about the new study and its implications, MinnPost spoke with Dan Knights, a U of M computational microbiologist who was the senior author of the PNAS study. An edited version of that conversation follows.

MinnPost: Before we get into the details of the study, what is dysbiosis?

Dan Knights: Dysbiosis means an imbalance in your gut bacteria. It’s a little bit vague. Some people use it to mean a harmful imbalance, and other people use it just to mean something that’s abnormal, but not necessarily causing disease.

MP: Why is it a concern?

DK: It’s quite clear that we have been co-evolving with dozens —or hundreds — of bacterial species in our guts. In some ways they’re very much a natural part of our bodies, and they perform functions that we need. The strange thing is that they’re not part of the human species. It’s an entire domain of life that we can wipe out with a drug, like an antibiotic. That’s likely contributing to disease. There’s also some evidence at the human population level that diseases related to gut bacteria are rising epidemically all around the world. This includes diabetes, Crohn’s disease, ulcerative colitis, obesity and other metabolic and autoimmune disorders. It’s not necessarily causal in all cases, but it’s a bit of a smoking gun. At least, that’s the working hypothesis.

MP: Did that lead you to do this study on primates?

DK: There were two reasons to look at the primates. One is primate conservation, which is very important to us. What is it that’s unique about these different species of primates in the wild, and why do they have their own special bacteria? How does that bacteria help them survive? And how does replacing [that bacteria] with the wrong — or at least, abnormal — bacteria affect their health?

MP: Why did you choose these two particular types of monkeys, the red-shanked doucs and the mantled howler? 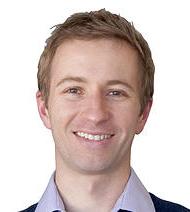 DK: The doucs have a specialized gut. They actually have a rumen, much like a cow. They eat a lot of plant material, way more than we could tolerate. Howlers have guts that look a little bit more like ours. We knew that we would be able to see very distinct fingerprints of different bacterial species in those animals in the wild that are special to their species. The howlers would have one set of bacteria, and the doucs would have another set. Then anything that happened to [those sets of bacteria] when they went to a sanctuary or in full captivity would give us a very good perspective, or lens, to look at the effect of captivity. We would be able to measure it.

DK: That was an enormous amount of work, which was done by [veterinary medicine PhD student] Jonathan Clayton in collaboration with a number of other authors on the paper. It was a big group effort, and was far from trivial. Jonathan spent the greater part of a year tracking these animals in the [Vietnamese] jungle, collecting samples from specific individuals and making sure they were collected in ways that protected the samples and made sure they didn’t get contaminated.

MP:  How would you describe your key findings?

DK: Monkeys in zoos get infected by our bacteria. They lose all of their normal bacteria they would have in the wild, and they catch, or getting colonized by, human bacteria. It’s highly correlated with decreases in plant fiber in their diet. They lose the native [bacterial] flora that would help them digest those plants, and they get colonized with the same bugs that we have.

We can’t prove that that’s bad, that it’s what causes many of them to be sick, to have gastrointestinal disorders in captivity. We also don’t know that it’s what causes humans to have very high rates of metabolic and autoimmune disorders. But if we’ve evolved with bacteria that perform some of our vital functions for us, then swapping them out for a completely different set is probably not a good idea.

MP: You found that the convergence of gut bacteria was pretty much complete among captive animals. But you also found something a bit different in the guts of wild doucs living in a Vietnamese animal sanctuary.

DK: Yes. We found that the severity of the disruption to the [primates’] normal diet and lifestyle would tell you how severe the disruption was to their gut microbiome. … In the wild, the [monkeys] were eating over 50 varieties of plant species. In the sanctuary, they were actually getting about half of those plants. That’s because there were two guys who literally got on a motorcycle every day and drove up to the jungle and harvested those plants and brought them back to the sanctuary for the animals to eat. In captivity, however, you could count the number of different plants they were eating on one hand. This lent support to the hypothesis that the less fiber they ate, the less they looked like wild primates and the more they looked like modern humans.

MP: And this was true for both species of monkeys.

DK: Right. That was another important aspect of the [study’s] design that helped us draw these conclusions. We had two completely different species of primate in the wild, and they converged to the same state in captivity. In several different zoos on several different continents — they all converged toward the modern human microbiome.

We also wanted to find out what would happen within a variety of other primate species, not just these two. So we went to yet another zoo. We collected another few thousand [primate fecal samples] from the Como Zoo [in St. Paul]. We found that across eight different primate species, they all converged to the same abnormal state.

MP: You note in your study that the differences between the wild and the captive primates were larger than any of the other differences you saw.

MP: I was surprised that you found that antibiotics didn’t seem to be a driver of this convergence.

DK: Yes. That surprised us, too. That was one of the reasons why we obtained all of the samples from the Como Zoo. We were able to access complete medical reports regarding the antibiotic usage in those animals. Amazingly, there was a subset of animals that had never had antibiotics in their recent history. Those animals were no more similar to the wild primates than their counterparts who had received, in some cases, many courses of antibiotics. So we found that antibiotics did not seem to be driving convergence, at least in that group.

MP: So, the dietary fiber is what seems to be driving this convergence.

DK: Yes. We don’t know conclusively from this study that diet was the cause, but it’s certainly the strongest factor associated with the changes. It could be that other confounding factors [are involved] — for example, stress or exposure to some of the bacteria that humans carry.

MP:  Does that mean that the animals in captivity could be “catching” human bacteria from their interaction with people, not necessarily from their diet?

DK: Right. They are all catching our bugs. But we don’t know why those bacteria are the ones that are getting in. It’s not that these captive animals are eating the same diet that we are. They do have specialized food, and certainly conservationists and dieticians working in zoos are doing everything they can to get them a healthy diet. There could be something else going on.

MP: So, does this mean we humans should be eating more vegetables and fruits?

DK:  There’s nothing wrong with eating more fruits and vegetables, and that’s recommended by many different dietary studies. Certainly this research would support that. But if we assume — and this is still a hypothesis — that, as modern humans, we no longer have most of the bacteria we evolved with, we still don’t know what we have to do to restore them. Likely, you would have to have both exposure to those bacteria — you’d have to get them in there somehow — and you’d have to start consuming the types of foods that [hunter-gatherer human societies eat] to support those bacteria.

So simply adding more leafy greens to your diet is not going to magically replenish some of the wild bacteria, when they aren’t even around for you to be exposed to. Also, we may not want all that bacteria back. We don’t know which [of those wild bacteria] are beneficial, which ones would take advantage of us, and which ones would be simply along for the ride. A lot of work needs to be done to figure out what is the optimal configuration of the microbiome. We do know that it’s linked to virtually every major chronic disease, but we still don’t know which aspects of it are good, which aspects are bad and which are benign.

FMI:  You can read the U of M study in full on the PNAS website.