Minnesota was one of only four states to experience a drop in its adult obesity rate between 2014 and 2015, according to a new report released Thursday.

That’s a much better performance than a year earlier, when Minnesota was one of only five states whose rates increased. 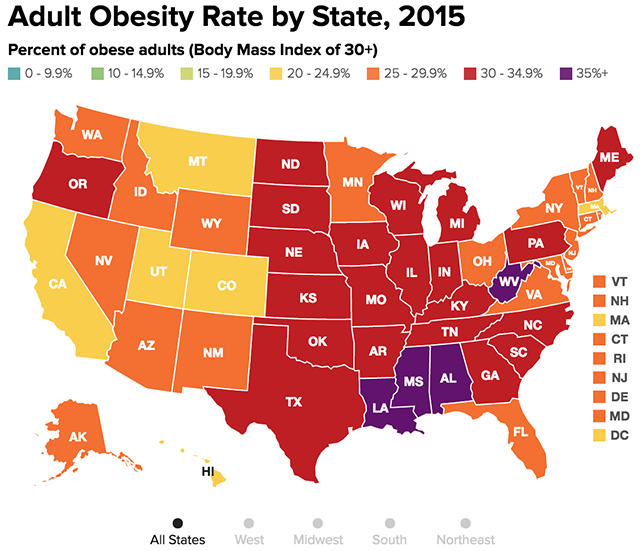 The other three states whose obesity rates fell in 2015 were Montana, New York and Ohio. As the report points out, these declines mark the first time in the past decade when any state has experienced a drop in its rate — except for Washington, D.C., in 2010.

The “State of Obesity” report, which is based on data collected by the Centers for Disease Control and Prevention (CDC), was compiled and published by the Trust for America’s Health and the Robert Wood Johnson Foundation.

Although the overall national trend reflected in these latest CDC statistics is positive, obesity remains far too common in the United States, putting millions of Americans at risk for heart disease, type 2 diabetes, certain cancers, arthritis and other chronic diseases and costing the country up to $210 billion annually in health-related costs.

Indeed, the adult obesity rate is at or above 30 percent in 25 states and exceeds 35 percent in four states. Two states, Kansas and Kentucky, saw an increase in their rate between 2014 and 2015.

No state had an adult obesity rate in 2015 below 20 percent.

All of Minnesota’s neighboring states — North Dakota, South Dakota, Wisconsin and Iowa — had obesity rates above 30 in 2015.

“These latest CDC findings confirm that Minnesota has returned to its historically lower obesity rate that remains steady on a year-to-year basis even as other states and the U.S. as a whole continues on an upward trend,” the Minnesota Department of Health noted in a released statement. 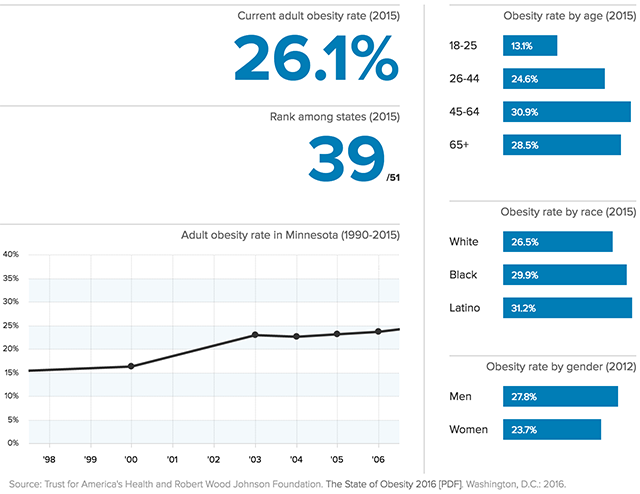 Here are some other Minnesota numbers from the report:

FYI: You can read the “The State of Obesity” report in full here. It’s packed with great state-by-state charts and other visuals.