Cat-scratch disease, a bacterial infection spread through scratches and possibly bites from cats, occurs more often and sends more people to the hospital than health officials previously believed, the Centers for Disease Control and Prevention (CDC) reported this week.

But there’s no need for any cat lovers to panic. The CDC report also makes clear that the infection is rare.

Still, cat owners should know the symptoms of cat-scratch disease, particularly since the infection can sometimes be serious — and even fatal — if left untreated.

But, let me emphasize again: that likelihood is quite rare.

How you get infected

Cat-scratch disease is caused by a bacterium (Bartonella henselae), which is spread by cat fleas. Cats get infected when a flea bites them or when flea “dirt” (feces) gets into a wound. The bacterium can also get under the cats’ nails or between their teeth when they scratch or bite at the fleas.

Cats spread the bacterium to people when they break human skin, either by scratching or biting, or when they lick a person’s existing wound.

Cats do not usually appear sick when they are infected. And such infections are quite common. Forty percent of cats carry the B. henselae bacterium at some time in their lives, according to the CDC. Kittens and young cats (up to six months old) are particularly likely to be carriers.

People show symptoms of cat-scratch disease from three to 14 days after being infected. Early symptoms include swelling and a small raised pimple-like lesion at the scratch or bite site, as well as fever, headache and fatigue. Later, lymph nodes near the infection site may become swollen and painful.

In serious cases, the infection may spread to the eyes, bone, brain or heart. Such complications are most likely to occur in children under the age of 5 and in people with weakened immune systems.

Treatment for mild cases of cat-scratch disease usually involves taking over-the-counter medications to reduce the fever and swelling. In more serious cases, antibiotics and other drugs may be prescribed.

Tracking down the numbers

The purpose of the new CDC report was to get a better idea of the overall picture of cat-scratch disease in the United States. How many people are getting infected, and which groups are most at risk?

To answer those questions, the CDC researchers dug through a medical claims database from 2005-2013 that contained the medical records of almost 40 million Americans under the age of 65.

They found 13,273 diagnosed cases of cat-scratch disease in that database. Of those, only 538 people had symptoms severe enough to be hospitalized. The other 12,735 were seen by a doctor and sent home. 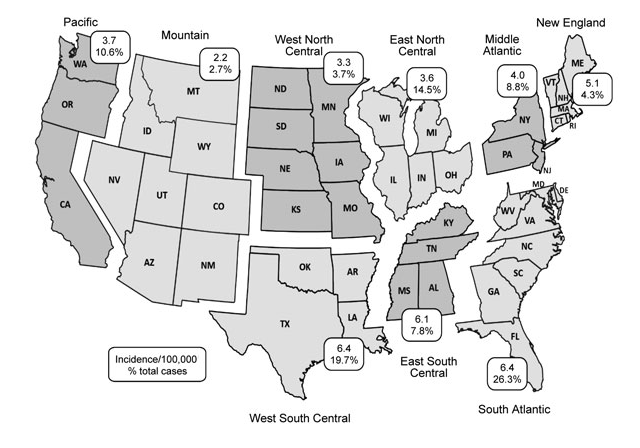 CDC
Geographic distribution of cat-scratch disease by US census division, United States, 2005–2013. Rates are reported as average incidence per 100,000 population per year. During the study period, there were less than 10 cases in Alaska and less then 10 cases in Hawaii.

From those numbers, the CDC researchers estimated that 4.5 of every 100,000 Americans under the age of 65 are diagnosed with cat-scratch disease each year, but fewer than 1 in 500,000 Americans need to be hospitalized as a result of the infection.

In the West North Central region of the United States, which includes Minnesota, the incidence rate was 3.3 per 100,000 residents.

The report also found that the national number of reported cases of cat-scratch disease fell by about 1 per 100,000 between 2005 and 2013, but that the number of people being admitted to hospitals with the disease stayed about the same.

The CDC researchers estimate that the annual direct medical cost to the U.S. for treating cases of cat-scratch disease is $9.7 million.

Here are some other findings from the report:

The CDC researchers say it’s unclear why such an unusually high number of cat-scratch disease cases occur in January. It could be because cats are indoors more in winter, and thus have greater chances to interact with humans. Also, the fleas that spread cat-scratch disease tend to be around more in the fall and winter.

“Another hypothesis is that teenagers and middle-aged adults, who typically spend a great deal of time at school or work, spend more time during the holidays at home in contact with their cats or traveling to other house with cats,” the CDC researchers add.

What cat-owners can do

To prevent cat-scratch disease, the CDC recommends the following:

Things not to do

Oh, and all you dog owners out there, don’t get too smug. Species of Bartonella linked to cat-scratch disease have been found on other mammals — including dogs.

FMI: The CDC report can be read in full online in the October issue of the agency’s journal Emerging Infectious Diseases.