On Wednesday, the Obama administration announced it was setting a goal of eliminating traffic deaths within 30 years — a goal that puts a lot of faith in the successful development of self-driving cars.

Whether that laudable “zero fatalities” target will be reached by 2046 is anyone’s guess. But right now, in 2016, we are having what the head of the National Highway Traffic Safety Administration (NHTSA), Mark Rosekind, is calling “an immediate crisis.”

In 2015, traffic fatalities in the United States climbed to 35,092, the highest number since 2008 — and the largest year-to-year increase in more than 50 years. That deadly upturn appears to be continuing. During the first six months of 2016, an estimated 17,775 people died on U.S. roads — up 10.4 percent from the first six months of the previous year, according to newly released data from the NHTSA.

Yes, people are driving more, primarily due to an improved economy and lower gas prices, but that doesn’t explain the higher number of deaths. For the fatality rate per vehicle miles traveled has also increased, from 1.05 fatalities in the first half of 2015 to 1.12 during that same period in 2016.

“It’s too soon to attribute contributing factors or potential implications of any changes in deaths on our roadways,” the NHTSA report says. But one of the leading causative contenders, according to many traffic experts, is the cavalier way so many Americans let themselves get distracted with cellphones and other electronic gadgets while driving and walking — and sometimes even while cycling.

Minnesota has also experienced a troubling — and unexpected — rise in traffic fatalities. After marking in 2014 its fewest traffic-related deaths since the 1940s, the state suddenly saw the number jump almost 14 percent the following year.

“We had been trending downward over the last decade by about 37 percent,” said Donna Berger, director of the Office of Traffic Safety for the Minnesota Department of Public Safety, in an interview with MinnPost on Thursday. “So it was very alarming when we saw an increase in 2015. And what was most alarming to me was the 21 percent increase in distracted driving-related fatalities.”

“There are far too many people who are distracted by their cell phones and by other distractions in the car and are not focusing on the task of driving,” she added. “They’re putting us all in danger.

Unfortunately, the number of traffic deaths in the state this year is running closer to the 2015 rather than the 2014 totals. As of Thursday, the Office of Traffic Safety estimated that 282 people had died on Minnesota’s roads in 2016 compared to 291 at this time last year, said Berger.

In addition to distracted driving, leading contributing factors in Minnesota’s traffic fatalities are excessive speed, impaired driving (whether by alcohol or drugs) and lack of seat belt use. 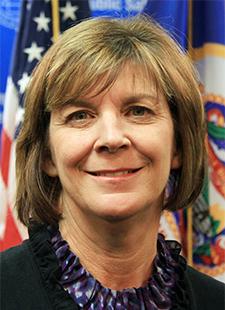 “Even though we have a 94 percent compliance rate for front-seat drivers and passengers, almost 50 percent of people who die in traffic fatalities are unbuckled,” said Berger. “If we could get that last few percentage of people to buckle up, we’d be saving a significant amount of lives because your seatbelt is your best defense if you are in a crash.”

The NHTSA report notes that the jump in fatalities nationally in 2015 was mainly driven by increases in pedestrian, motorcyclist and bicyclist deaths.

Deaths in all those categories also increased in Minnesota that year. Motorcycle deaths rose from 44 to 58, pedestrian deaths from 24 to 41, and bicyclist deaths from 5 to 10.

“It all comes down to everyone being patient, and everyone taking responsibility,” said Berger. “You have to share the road. No one is more important than another. We all have a right to be on the road, but we all have to follow the rules of the road as well.”

And we all need to pay more attention to our surroundings. Pedestrians, she pointed out, are often as distracted by their cellphones as drivers.

“We see a lot of people with their face in their phones, walking and texting,” Berger said.

It’s going to take a culture change to get drivers — and pedestrians — to put down their phones while on our roads and streets, she added, but she believes that change will come.

“Back in the 70s, it was very acceptable for people to go out and drink and drive home, and you’d even joke about it,” she said. “Now, that’s not accepted. It’s taboo. We don’t think it’s funny that people drink and drive. I think we need to do the same with texting and driving. People should really speak up if they see someone doing it.”

“Hopefully, we’ll get to thinking about it the same way we think of drinking and driving,” she added, “because it’s just as dangerous.”

FMI: You can read the NHTSA’s report of its preliminary estimates for motor vehicle traffic fatalities for the first half of 2016 online. The Minnesota Office of Traffic Safety’s annual “Crash Facts” report can also be read in full on that agency’s website.