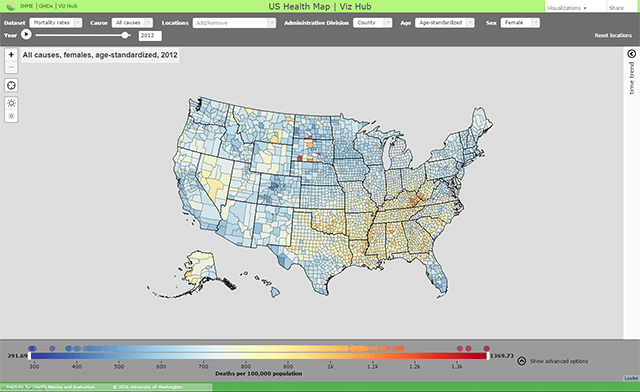 Click on the image above for an interactive data visualization tool that shows modeled estimates of U.S. county-level trends in mortality rates for 21 major causes of death overall and by sex for the years 1980 through 2014.

Geography — where we live — is strongly associated with how we and our neighbors are most likely to die, according to a new county-level analysis of U.S. mortality data published Tuesday in the Journal of the American Medical Association (JAMA).

Yes, plenty of other research has linked geographic regions, states and communities to particular causes of death. This new study appears to have dived into the data even deeper, however, offering what may be the most comprehensive view to date of how Americans die.

The study found, for example, that deaths resulting from heart disease are more common in certain counties along the southern half of the Mississippi River than in most other places in the U.S., while violent deaths, such as suicides and homicides, occur at the highest rates in counties in Alaska, several southwestern states, and on Native American reservations in North and South Dakota.

Deaths from cirrhosis (a disease often but not always caused by alcohol abuse) were also found to be more common in the American Southwest, particularly in eastern Arizona, New Mexico, and southern and western Texas, as well as in selected counties in Colorado, Nevada, Wyoming, Montana, North Dakota and South Dakota. On the other hand, people were the least likely to die of cirrhosis in several counties in southern Minnesota, as well as in eastern South Dakota and Kansas.

“While the leading causes of death are similar across counties, we found massive disparities in the rates at which people are dying among causes and communities,” said the study’s lead author, Laura Dwyer-Lingren, a researcher at the Institute for Health Metrics and Evaluation (IHME) at the University of Washington in Seattle, in a released statement.

Identifying these county-level inequalities is important, she added, because it helps “spotlight areas where access to essential health services and quality of care needs to be improved.”

For this study, Dwyer-Lingren and her colleagues used county-level death records from the National Vital Statistics System (more than 80 million individual records in all) to determine how mortality from 21 causes of death has changed over time — specifically, from 1980 through 2014. The researchers found, for example, that about half of the counties in the U.S. have experienced increases in their death rate from suicide and violence since 1980, while the other half have experienced decreases. (The greatest increase in this category  — 131 percent — occurred in Kusilvak Census Area in Alaska, while the greatest decrease — 72 percent — occurred in New York County, New York.)

One of the more striking findings of this study is that of 3,110 counties (or county-equivalents) in the U.S. identified for this analysis, more than 2,000 saw increases of 200 percent or more in death rates related to substance abuse (including both alcohol and drug use) and mental disorders since 1980. The changes in these rates varied widely from county to county, however. The greatest increase — 2,206 percent — occurred in Clermont County, Ohio, while the greatest decline  — 45 percent — occurred in Miami-Dade County Florida.

Here are some other trends noted in the study:

Minnesota counties appear on several of the study’s “top 10” lists for counties with the lowest mortality rates in 2014 for specific causes of death. Here are some examples:

The study has several limitations. Most notably, the researchers used algorithms and other statistical methods to “clean up” data from about 19 million death certificates that were incomplete or ambiguous about the primary cause of death. Those methods may or may not have been accurate, the study’s authors point out.

But the overall finding of the study is clear.

“We conclude that, in general, disparities across counties in the U.S. are actually growing for many causes of death,” says Dr. Christopher Murray, director of IHME, in a video that accompanies the study. Those disparities are apparent even for some of the major causes of death in the U.S, such as heart disease and cancer, he adds.

‘We know that unequal medical access and quality of care create health disparities in the U.S. for many cause of death, while other causes are linked to risk factors or policies,” adds Ali Mokdad, another co-author of the study, in the released statement. “Indeed, this study will inform the debate on how to improve the health of our nation.”

FMI: You can read the study in full on the JAMA website. IHME has also posted an interactive map on its website, where you can explore county-level health trends in the U.S. for all 21 causes of death cited in the study.