Much of the country is ill-equipped and ill-prepared to deal with a public health emergency, such as a bioterror attack, a large foodborne illness outbreak or a natural disaster, according to a new report from Trust for America’s Health (TFAH), a nonprofit, nonpartisan public-health advocacy organization.

Specifically, the report, “Ready or Not: Protecting the Public’s Health from Diseases, Disasters and Bioterrorism,” found that 26 states and the District of Columbia scored six or lower on 10 high-priority indicators of health emergency preparedness.

Minnesota was one of those 26 states.

“Public health preparedness has improved leaps and bounds from where we were 10 years ago,” said Paul Kuehnert, director of the public health team at the Robert Wood Johnson Foundation, which funded the report, in a released statement. “But severe budget cuts at the federal, state and local levels threaten to undermine that progress. We must establish a baseline of ‘better safe than sorry’ preparedness that should not be crossed.”

As the report makes clear, the country frequently finds itself being caught off guard when a new public health emergency arises, whether it’s a disease outbreak (like Zika or Ebola), a natural disaster, or a bioterrorist threat.

“The current system is not built for “readiness” — to be able to consistently respond in an effective and efficient way when new crises occur,” the report explains. “Health security is chronically underfunded. So when emergencies happen, they divert time, attention and resources away from other ongoing needs and priorities.”

The state with the highest ranking for health-related emergency preparedness is Massachusetts, which had a perfect score of 10. Next comes North Carolina and Washington, each with a score of 9. The states with the lowest scores (3 of 10) are Alaska and Idaho.

Minnesota’s score was 6 — above that of South Dakota (5), but below that of its other immediate neighbors, Iowa (8), Wisconsin (7) and North Dakota (7).

The four emergency preparedness indicators that Minnesota did not receive a point for were:

MinnPost reached out to the Minnesota Department of Health (MDH) for comment on the state’s somewhat disappointing performance in the report.

“Like Trust for America’s Health (TFAH), we strongly believe that being prepared for public health emergencies and crises should be a high priority for health departments and state governments across the nation,” responded MDH spokesperson Michael Schommer via e-mail. “While Minnesota has ranked highly on many other rankings of states with regard to public health, and by another recent report focusing on emergency preparedness (the National Health Security Preparedness Index), we appeared to fall just short on some of the indicators chosen by TFAH. Nevertheless, we are proud of the work we’ve done in the area of preparedness even as we continue to work hard to improve that readiness.” 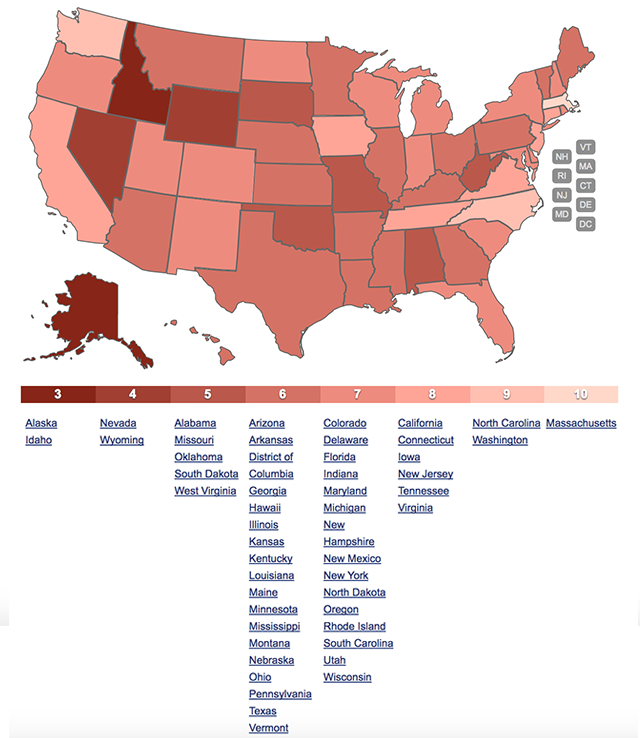 Schommer pointed out that Minnesota’s flu vaccination rate is currently 49.7 percent — which is just under the 50 percent rate that TFAH uses for its flu vaccination metric. In addition, at the time TFAH collected its information for the current report, Minnesota had implemented three of the four activities designated to increase capacity for preventing health-care-associated infections, and has since added the fourth one — a structured way of validating state-level data collected about such infections.

The MDH does not play a major role in getting medical supplies and health-care personnel into restricted areas during an emergency (that’s the purview of the Minnesota Department of Public Safety), Schommer noted. As for the fourth indicator Minnesota fell short on  — public health funding — Schommer explained that “states vary widely in the details of their budgets and this makes direct comparisons across states difficult.”

“In the case of Minnesota, our approach to public health has always been a collaboration across federal, state and local levels of government,” he stated. “Minnesota has historically been successful at seeking federal grant dollars, for example, to fund activities like emergency response and readiness. However, in recent years this federal funding has been reduced.”

FMI:  You’ll find the full “Ready or Not” report — and a page providing details about Minnesota’s scores — on the TFAH website.