School shootings are significantly less likely to occur in states that require background checks on gun and ammunition purchases and that spend higher amounts on mental health services and public K-12 education, according to new research published online Tuesday in the journal Injury Prevention.

The study, which was conducted by a team of epidemiologists and biostatisticians from Boston University, Columbia University and the University of Texas, also found that school shootings are slightly less likely in states with large proportions of people living in urban areas.

Almost 34,000 people die from gun violence in the United States each year, including more than 11,000 in homicides. Another 81,000 individuals are injured in gun-related incidents each year.

School shootings are responsible for only a small percentage of those deaths and injuries, but, as this current study shows, such incidents appear to be on the rise — strikingly so.

Not much hard evidence

The study was undertaken in the wake of the December 2012 Sandy Hook Elementary school shooting, in which 20 children and six adult school staff members were shot dead by a single gunman.

“While particularly horrific, the Sandy Hook shooting was only one of several such events in the USA in the past years,” write the study’s authors. “The USA has an extraordinarily high rate of school shootings by comparison with other countries.”

Public discussion in the U.S. about how to lessen the incidence of school shootings has been highly contentious. Various factors have been proposed — and heatedly debated — as possible reasons for why the U.S. is experiencing so many school shootings, but there has been little solid evidence to back up any of the theories.

A jump in incidence

The current study’s authors decided to look specifically at four state-level factors often cited as having a possible relationship with school shootings: background checks for guns and ammunition, spending on mental health services, spending on K-12 education, and “urbanicity” (the proportion of residents living in towns and cities). They focused on the three years immediately after the Sandy Hook shooting: 2013-2015.

The researchers began by identifying all school shootings — “an incident when a firearm was discharged inside a school building or on school or campus grounds” — that occurred in the U.S. during those years. Because the federal government keeps no national registry of such incidents, the researchers had to rely on media reports to gather this data.

The findings are quite disturbing. The researchers identified 154 separate school shootings between 2013 and 2015 — an average of one per week. The incidents also increased significantly in number with each passing year. There were 35 school shootings in 2013, 55 in 2014, and 64 in 2015.

These numbers compared to only 44 incidents during the entire four decades of 1966 through 2008, which was a rate of about one a year, the researchers point out.

“This spike in school shooting may be explained by the theory of contagion,” write the researchers. “Evidence has shown that mass killings involving firearms are motivated by similar events in the immediate past.”

In all, 84 people in the 2013-2015 school shootings, including 27 of the perpetrators, died, and another 136 individuals were injured. Almost half of the incidents (45) resulted in people other than the shooter being killed.

Most of the shootings were done intentionally (66.2 percent) and were carried out by boys (99.3 percent). In more than a third of the incidents, the shooter was known to be a student. (As the researchers point out, detailed information about the shooter, including his age, was sometimes missing from the news accounts.)

More than half (54.6 percent) of the shootings occurred in publicly funded, K-12 schools, and a majority of the victims who died of gunshot wounds (59 percent) were students.

When they looked at the state-by-state data, the researchers found that during the three-year period of the study, 39 states had at least one school shooting — including Minnesota, which had two.

(No details are provided, but the Minnesota incidents may have been two that occurred in 2015. In one of the incidents a Mankato State University student shot himself in the head while in the school’s library. In the other, a 15-year-old Coons Rapids boy shot and killed himself in a school parking lot after unintentionally shooting and wounding his girlfriend earlier in a home.) 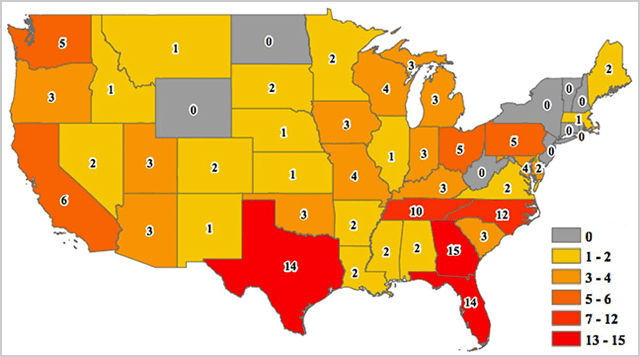 Injury Prevention
Incidents of school shootings between 2013 and 2015.

The researchers then gathered state-by-state data on the four factors they were focusing on for possible links with these events, and looked for associations between that data and the incidence of school shootings.

They found that the incidence of such shootings between 2013 and 2015 was 45 percent lower in states that had mandatory background checks for at least some kinds of firearms than in states that didn’t have such requirements. (The states that had background checks during the study were California, Colorado, Connecticut, Delaware, Hawaii, Illinois, Iowa, Maryland, Massachusetts, Michigan, Nebraska, New Jersey, New York, North Carolina, Pennsylvania, Rhode Island and Washington.)

Four states (Connecticut, Illinois, Massachusetts and New Jersey) also had mandatory background checks for ammunition purchases. The incidence of school shootings in those states was 89 percent lower than elsewhere in the country.

As the study’s authors point out, this study has many important limitations. It is an observational study, and therefore cannot draw firm conclusions about cause and effect. The researchers also had no way to identify the mental health status of the perpetrators in the school shootings. Furthermore, the study relied on media reports, which did not provide consistent (or possibly even accurate) information about the shootings.

“It is also likely that shooting incidents where no fatalities or injuries occurred may be more likely to go unreported by news agencies, resulting in underestimation of the prevalence and the estimates,” the study’s authors add.

Still, the study’s basic findings indicate that the increasing number of school shootings in the U.S. “may be associated with existing gun laws and other state-level factors,” say the researchers.

As I’ve noted here before, pressure from the National Rifle Association (NRA) resulted in the 1996 Congressional passage of the so-called Dickey Amendment, which cut off Centers for Disease Control and Prevention funding for gun violence research. Congress extended that restriction to the National Institutes of Health (NIH) in 2011.

Those efforts have succeeded in severely limiting the ability of scientists to gather evidence on the most effective approaches to reducing gun violence in the U.S.

The current study was self-funded by its authors.

FMI: You can read the full study on the Injury Prevention website.