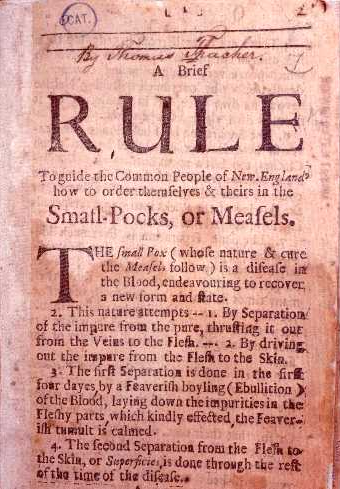 The paper was a pamphlet on smallpox, a subject very much on the minds of everyone in the New World. At that time, and for many years afterward — until immunization became widespread in the 20th century — smallpox was a dreaded disease. Over the centuries, the highly contagious viral infection killed millions of people worldwide, including, by the end of the 1600s, an estimated 90 percent of North America’s Native peoples, who had never been exposed to the disease before Europeans arrived.

Smallpox has caused immeasurable pain, suffering and tragedy. Yet, it is also one of medicine’s greatest success stories. For it is a sterling example of how vaccines save lives.

In 1967 — a year when smallpox infected between 10 and 15 million people worldwide and killed about 2 million of them — the World Health Organization (WHO) launched a massive global immunization campaign to eliminate the disease once and for all.

It worked. A decade later, in 1977, the world recorded its last natural case of the disease, in Somalia. WHO declared the disease officially eradicated in 1979.

Minnesota experienced many smallpox epidemics over the years, but the worst, by far, occurred during 1924 and 1925. More than 500 Minnesotans died in that epidemic, including 400 in the Twin Cities.

Most of those deaths could have been avoided if more people had been immunized, but, as Paul Nelson notes in an article published by the Minnesota Historical Society (and reprinted a few years ago in MinnPost), “state law blocked a sound public health response.”

The 1924-1925 epidemic therefore offers some important lessons for all of us today, for it’s an all-too-graphic reminder of what can happen when people fail to take the need for vaccinations seriously.

An 1883 state law had required all school-age children to be vaccinated against smallpox. But in 1903, the legislature repealed that law and made compulsory child vaccination illegal. Although smallpox vaccination is almost 100 percent effective, public health officers had no power to make people protect themselves. They could recommend, but not mandate, the vaccine.

Of course, Nelson adds, after the deadly nature of the epidemic became clear, “the frightened public jammed the vaccination centers.”

As reported in the Minneapolis Journal, as many as 17,000 got their skin scratches in a single day. By mid-December 1924 — according to public health officials — some 210,000 people in St. Paul and 350,000 in Minneapolis had been vaccinated.

The epidemic was over by August 1926, but, as Nelson explains, “the final toll of suffering was grim.”

After the 1924-1925 epidemic, a few outbreaks of smallpox continued to occur in Minnesota, but none were as widespread or as deadly. The last reported smallpox-related death in the state was in 1941.

The final smallpox case in the United States occurred a few years later, in 1949.

We can thank vaccines for that momentous event.

FMI: You can read Nelson’s account of the 1924-1925 Minnesota smallpox epidemic here at MinnPost or on the Minnesota Historical Society’s MNopedia website. In 2001, Minnesota Public Radio published excerpts from a 1925 report on the epidemic by the Minnesota Department of Health, which you can find on the radio station’s website.