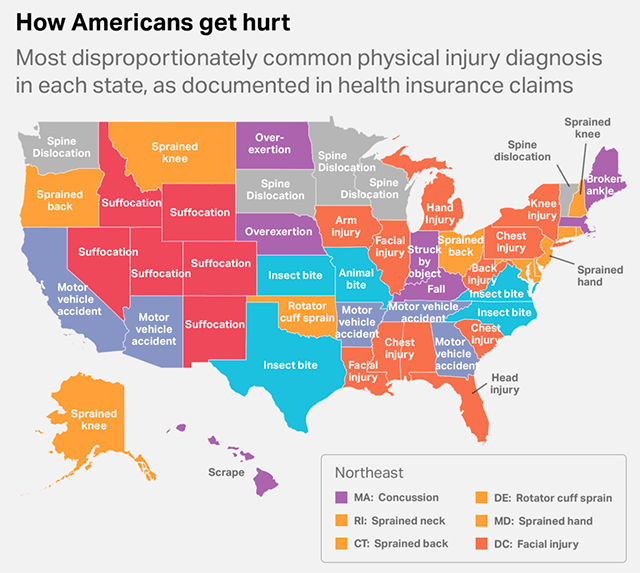 Minnesotans experience a disproportionately high number of spine dislocations, according to a new analysis of health insurance claims.

That’s not the most common injury we report to our health insurers, however. Here in Minnesota, as is true across most of the country, people are most likely to make a claim for an injury that falls into the “cuts and bruises” category.

These quirky but intriguing findings were reported Thursday by Amino, a company that uses data analytics to provide cost-comparison information on medical services. For this particular analysis, the company took 244 million insurance injury claims from the years 2012-2016, and then sorted the 3,000-plus different billing codes into easily identifiable types of injuries — everything from “insect bite” to “animal-drawn vehicle accident.”

“Due to the sheer number of categories, no single injury accounts for more than 7-8% of all diagnoses related to physical injuries,” writes Olivia Marcus, a communications staffer at Amino, in a company blog post about the analysis. “Still, we found that the most common injuries don’t vary a lot across the country. ‘Bruising’ or ‘open wound’ [an injury where the skin is broken] are the most frequent injury diagnoses in every state except Colorado, where ‘fall’ tops the list.”

The finding about cuts and bruises is “interesting, but not surprising,” she adds. “Cuts and bruises are everyday injuries that most people endure, regardless of geographic location.”

Amino didn’t halt its analysis with the most common injuries, however. The company also wanted to find out what types of injury are particularly distinctive for each state. It did this by comparing each injury’s frequency per state with the national frequency.

“That allowed us to determine which injuries were disproportionately more or less common in each state, compared to the nation as whole,” explains Marcus. “Here’s an example. Injuries related to motor vehicle accidents make up 1.5% of all physical injury diagnoses in the United States. But in Tennessee, they make up 2.5% — that’s 1.6 times more common than the national distribution.”

And that’s how “spine dislocation” popped up as the most disproportionally common physical injury diagnosis in Minnesota. Interestingly, that diagnosis is also unusually common in two of our neighboring states, Iowa and Wisconsin, as well as in New Hampshire and Washington.

The Amino report doesn’t offer any explanation for what might be causing those dislocated spines, but such injuries are usually the result of motor vehicle accidents, falls, violence and sports activities.

One of the most surprising trends that emerges from Amino’s data is the prevalence of  “suffocation” in six mountainous states: Nevada, Idaho, Utah, Wyoming, Colorado and New Mexico.

“We can’t say for sure why this is,” says Marcus. “But the vast majority of “suffocation” diagnoses were for hypoxemia, the medical term for low blood oxygen. Interestingly, hypoxemia can be caused by exertion at high altitudes, where oxygen is scarce. We can’t prove that this is correlated to the altitude of Mountain states, but it could be related.” 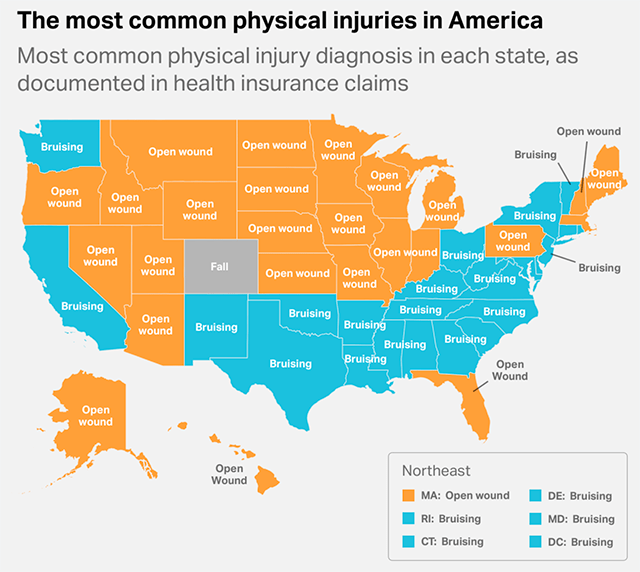 “Other results seem to corroborate documented issues, like the disproportionate number of concussions in Massachusetts,” she adds. “According to a 2016 report from Blue Cross Blue Shield, concussions diagnoses have been rising across the country due to increased awareness — and Massachusetts had the highest youth concussion rate in the country in 2015.”

As Marcus explains, Amino focused on injuries that represented at least 1 percent of physical injury diagnoses in each state. “That way, we saw injuries that were distinct, but not extreme outliers,” she says.

But when they did lower the standard to .01 percent of diagnoses — and, therefore, included extremely rare injuries — their analysis revealed some interesting, and kind of odd, distinctions among the states:

FMI: You can read Marcus’ full account of Amino’s report, including a description of its methodology, on the company’s website.