Losing weight after menopause is associated with a lower risk of developing endometrial cancer, particularly — but not exclusively — among women who are obese, reports a study published online this week in the Journal of Clinical Oncology (JCO).

“Many older adults think it’s too late to benefit from weight loss, or think that because they are overweight or obese, the damage has already been done. But our findings show that’s not true,” said Juhua Luo, the study’s lead author and a professor of epidemiology and biostatistics at Indiana University, in a statement released by the Association of Clinical Oncology (ASCO), which publishes JCO.

“It’s never too late, and even moderate weight loss can make a big difference when it comes to cancer risk,” Luo added.

Cancer of the endometrium (inner lining of the uterus) is the fourth most common type of cancer among women in the United States. Each year, more than 50,000 women are diagnosed with the disease, usually with early-stage tumors, which have a high cure rate. But, as an editorial that accompanies the JCO study points out, the death rate for endometrial cancer has been increasing in recent years. In 2016, the disease took the lives of 10,170 women in the U.S. — a 25 percent increase compared with just five years earlier.

So, this new study’s finding — that intentional weight loss helps lower the risk of endometrial cancer — has some important preventive-health implications.

For the study, Luo and her colleagues analyzed data collected from more than 36,000 women, aged 50 and older, who participated in the national Women’s Health Initiative. The gathered information included the women’s weight and body mass, which were recorded at the start of the study and at year three. 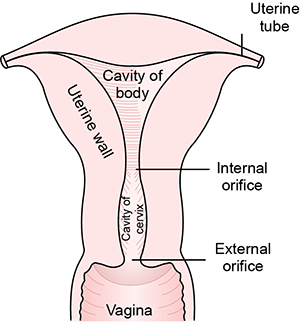 Anatomy of the Human Body
Diagram showing regions of the uterus

The women were followed for an average of 11 years. During that period, 566 of them developed endometrial cancer.

The analysis found that women who had intentionally (through dieting, not through illness) lost more than 5 percent of their body mass during the first three years of their enrollment in the study were 29 percent less likely to develop endometrial cancer than women whose weight stayed stable.

The association was even stronger for women who were obese (who had a body mass index, or BMI, of 30 or greater) at the start of the study. They experienced a 56 percent reduction in risk after shedding at least 5 percent of their weight.

The study also found that women who gained more than 10 pounds had a 26 percent higher risk of developing endometrial cancer than those whose weight remained the same.

“These findings should motivate programs for weight loss in obese postmenopausal women,” Luo and her colleagues conclude.

The study is observational, which means its findings are not proof that weight loss will lower the risk of endometrial cancer. Other factors, not considered in the analysis, may explain the results.

The study also didn’t account for weight change beyond year three of the study.

Still, the findings are consistent with other research on the topic that has found a strong association between gaining weight and an increased risk of cancer.

“There have been more than a thousand studies linking obesity to an increased risk of endometrial and other cancers, but almost none that look at the relationship between weight loss and cancer risk,” said Dr. Jennifer Ligibel, an ASCO expert in cancer prevention, in the organization’s released statement.

“This study tells us that weight loss, even later in life, is linked to a lower risk of endometrial cancer,” she added. “The findings also support the development of weight loss programs as part of a cancer prevention strategy in overweight and obese adults.”

FMI: The study and the editorial can be read in full on JCO’s website. For more information about endometrial cancer, including its symptoms, go to the National Library of Medicine’s website.