Minnesota has a north-south health divide: Its healthiest counties tend to be in the southern part of the state and its least healthy ones in the northern part, according to the 2017 “County Health Rankings” released Wednesday by the Robert Wood Johnson Foundation and the University of Wisconsin Population Health Institute.

Of Minnesota’s 10 healthiest counties, which were (in order) Carver, Scott, Red Lake, Washington, Houston, Marshall, Waseca, Wabasha and Olmsted, only three — Red Lake, Stevens and Marshall — are north of the Twin Cities.

All of Minnesota’s 10 least-healthiest counties, on the other hand  — Mahnomen, Clearwater, Cass, Beltrami, Itasca, Norman, Mille Lacs, St. Louis, Cook and Pine — are up north.

The two most populous of Minnesota’s 87 counties, Hennepin and Ramsey, ranked 38th and 64th in this year’s report.

Those rankings are based on more than 30 factors that influence health, including smoking, alcohol and drug use, access to health care, education, income, and air and water quality.

This year a new factor was added: “youth disconnection” — the percentage of young people aged 16 to 24 who are not in school or working. As the report points out, education and employment are key determinants of health.

Rates of youth disconnection are higher in rural counties (21.6 percent) than in urban ones (13.7 percent) nationwide. Currently, about 4.9 million young people in the United States — 1 in 8 — fall into this “youth disconnection” category.

The “County Health Rankings” report also took a closer look this year at premature deaths — ones that occur before age 75. Nationwide, premature deaths have been on the rise, in large part because of an increase in deaths among people aged 15 to 44, the report shows. Between 2014 and 2015, 85 percent of the increase in premature deaths was due to an upsurge of early deaths in that age group.

The drug overdose epidemic is “a clear driver of this trend,” the report says. But other factors are also involved. Premature deaths due to gun-related injuries and to motor vehicle crashes are also on the rise.

The report also notes that during the last 15 years or so, suburban areas across the United States have gone from having the lowest rates of drug-overdose-related premature deaths to having the highest rates. 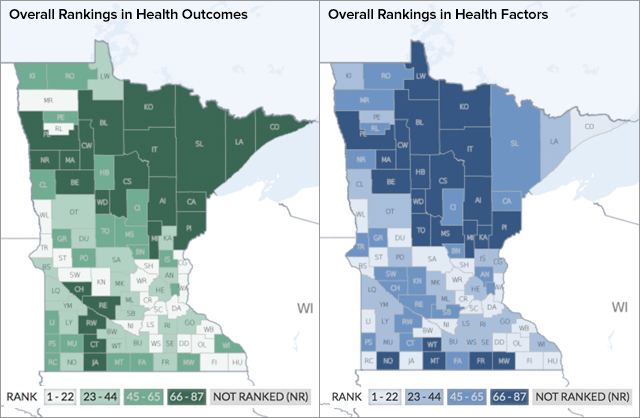 Forty-seven of Minnesota’s 87 counties saw improvements in their premature death rates between 1997 and 2015. But five counties — Jackson, Mahnomen, Murray, Pope and Renville — witnessed worsening rates. The others remained unchanged.

In fact, Minnesota’s rate puts the state in the top 10th percentile nationwide for that particular health outcome.

FMI: You can explore the scores of each Minnesota county in detail and compare them to other counties in Minnesota at the “County Health Rankings” interactive website.