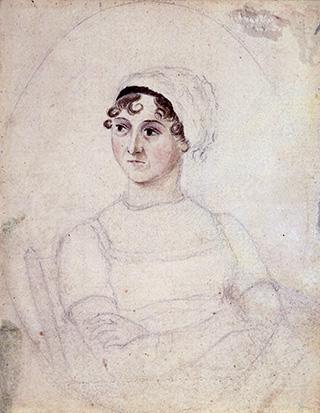 The suggestion that Jane Austen’s death in 1817 at the age of 41 was caused by arsenic poisoning was raised again on Thursday by researchers at the British Library.

The prevailing belief has been that the celebrated British novelist died of Addison’s disease, a rare condition that affects the adrenal glands. In 2011, however, crime writer Lindsay Ashford claimed to have pieced together evidence from various sources that indicated Austen’s early death resulted from arsenic poisoning — most likely from medicine prescribed by her doctor for “rheumatism.”

The British Library has now provided some new (although highly speculative) evidence that may support that arsenic-poisoning hypothesis.

In a blog post that appeared online Thursday, British Library curator Sandra Tuppen revealed that the institution had tested for the first time three pairs of spectacles believed to have belonged to Austen. The tortoiseshell-rimmed glasses had been stored in Austen’s writing desk until 1999, when a descendant of the celebrated British novelist gave them to the British Library.

“The tests revealed that the three pairs of spectacles are all convex or ‘plus’ lenses, so would have been used by someone longsighted,” writes Tuppen. “In other words, their owner needed glasses for close-up tasks, such as reading.”

“Interestingly,” one of the pairs “is much stronger than the others,” she adds.

The finding that Austen had severely deteriorating eyesight in her final years is nothing new. She complained about her “weak” eyes in her letters. “Could it be,” asks Tuppen, “that she gradually needed stronger and stronger glasses for reading because of a more serious underlying health problem?”

Yes, according to Simon Barnard, a London-based optometrist consulted by Tuppen and her British Library colleagues. The glasses suggest, he told them, that Austen had cataracts. Several illnesses might explain the cataracts, he added, including diabetes. But in the early 19th century, diabetes was fatal, so it’s unlikely that Austen would have lived long enough to have the strength of her eyeglasses adjusted several times.

A stronger possibility for the cause of Austen’s gradually developing cataracts, said Barnard, would have been poisoning from a heavy metal, such as arsenic.

That sounds very sinister (indeed, Ashford used it for the plot of her 2011 novel “The Mysterious Death of Miss Austen”). But, as Tuppen explains, “arsenic was commonly found in medicines in 19th-century England, as well as in some water supplies.”

Austen was known to have joint inflammation and pain — or “rheumatism,” as it was called during her lifetime. Doctors often prescribed daily doses of an arsenic solution for rheumatism (and many other conditions) throughout the 19th century. 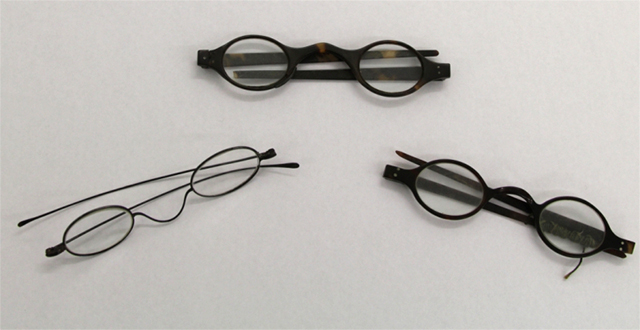 One of the symptoms of arsenic poisoning is hyperpigmentation. In a letter written just months before her death, Austen made this revealing comment: “I have had a good deal of fever at times and indifferent nights, but am considerably better now and recovering my looks a little, which have been bad enough, black and white and every wrong color.”

Which brings us to all the caveats that come with this new report from the British Library. To begin with, as Tuppen points out in her blog post, “although prescription lenses were in use in Austen’s day, we don’t know whether these glasses were prescribed for her by a physician, or whether she bought them ‘off-the-shelf.’”

In fact, no one can be absolutely sure that these were even Austen’s glasses.

And, as already noted, there are other possible medical explanations for Austen’s deteriorating eyesight.

The most definitive way of determining whether Austen died of arsenic poisoning would be to test one of her locks of hair, which were clipped and distributed among relatives and friends after her death by her sister, Cassandra.

Jane Austen’s House Museum in Chawton, England, has one of those locks.

Stay tuned. The last chapter of this literary medical mystery has yet to be written.

FMI: You can read Tuppen’s blog post about the testing of Austen’s spectacles at the British Museum’s website.