Deaths from Alzheimer’s disease rose by almost 55 percent in the United States between 1999 and 2014, according to a study published last Friday by the Centers for Disease Control and Prevention (CDC).

Most states — including Minnesota — experienced significant increases in their rates of Alzheimer’s deaths.

The new report also points out that the percentage of people with Alzheimer’s disease who are dying at home rather than in nursing homes or other long-term care facilities has risen significantly.

These trends underscore the growing emotional and financial costs of this devastating disease on older Americans and their families.

For the study, the CDC researchers used death-certificate data filed by all 50 states and the District of Columbia during the years 1999 through 2014. The data revealed that the age-adjusted Alzheimer’s death rate had jumped from 16.5 per 100,000 people in 1999 to 25.4 in 2014 — a 54.5 percent increase. (Age-adjustment is a statistical technique that lets researchers compare populations when the age of those populations might be quite different in ways that could skew a study’s results — in this case, when there were many more older people at the end of the study’s period than at its beginning.)

The rates rose the most — more than 60 percent — in two age groups: those younger than 65 and those 85 and older.

The study also found that the rates of deaths from Alzheimer’s in 2014 were higher among women than among men and among whites than among other racial or ethnic groups.

They also tended to be higher in the Southeast, plus some counties in the Midwest and West. But across the country, states were more likely to experience rising rates than falling ones. Forty-one states and the District of Columbia saw their age-adjusted Alzheimer’s death rates increase significantly during the 16 years of the study, the CDC researchers report.

Maine was the only state to see its rate of Alzheimer’s deaths significantly decrease. 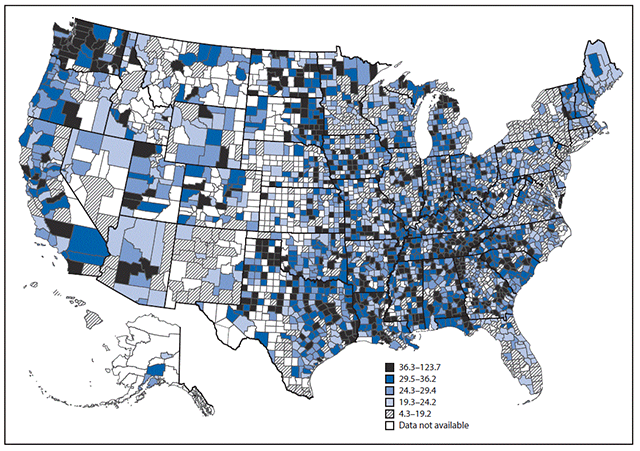 CDC
The figure above is a map of the United States showing the average annual age-adjusted death rate from Alzheimer’s disease per 100,000 population during 2005–2014 for each U.S. county.

The CDC researchers also looked at where people with Alzheimer’s were living when they died of the disease. They found that although most deaths in 2014 occurred in nursing homes or other long-term care facilities, more patients with the disease were dying at home than they were 16 years earlier.

“The number of Alzheimer’s deaths has increased, in part, because of a growing population of older adults,” write the CDC researchers. They also point out that the rise in deaths from Alzheimer’s disease may be the result of fewer “competing” deaths from heart disease and stroke.

In addition, Alzheimer’s is now much more likely to be correctly diagnosed — and cited on death certificates as the direct cause of death — than in past decades.

Whatever the reasons for the increase in the nation’s Alzheimer’s death rate, the growing burden of the disease on American families is clear.

“In 2015, caregivers of persons with dementia, including Alzheimer’s, provided 18.2 billion hours of unpaid assistance,” write the researchers. “These caregiving hours might correspond to increased financial costs for caregivers and decreased work productivity, as caregivers might take leave from work to ensure adequate care is provided.”

“As Alzheimer’s disease progresses, caregiving becomes very important,” explained Christopher Taylor, a CDC epidemiologist who led the study, in the released statement. “Caregivers and patients can benefit from programs that include education about Alzheimer’s disease, how to take care of themselves and their loved one, and case management to lessen the burden of care.”

“Supportive interventions can lessen the burden for caregivers and improve the quality of care for people with Alzheimer’s disease,” he added.

FMI:  The study was published in the May 26 issue of the CDC’s Morbidity and Mortality Weekly Report, where it can be read in full. You’ll find Minnesota-focused information and resources regarding the caring of an older relative with Alzheimer’s — or any other chronic disease — at the Minnesota Board on Aging’s website.

Deaths from Alzheimer’s disease up significantly in U.S. — and in Minnesota