Most Americans with acute conjunctivitis — “pink eye” — are prescribed antibiotic eyedrops, even though antibiotics are rarely needed as a treatment for this infection, according to a study published this week in the journal Ophthalmology.

The study also found that about 1 in 5 of those patients is given a prescription for eyedrops that combines an antibiotic with a steroid, a drug that may actually prolong the infection or make it worse.

Yet another troubling finding was that the prescribing of antibiotics for acute conjunctivitis appears to be driven more by socioeconomic factors and the type of doctor who sees the patient than by any medical indication that the drug is needed.

“This study opens the lid on overprescribing of antibiotics for a common eye infection,” said Dr. Nakul Shekhawat, the study’s lead author and a resident physician at the University of Michigan’s Kellogg Eye Center, in a released statement. “It shows that current treatment decisions for pink eye are not based on evidence.”

The study’s findings also underscore how antibiotics continue to be overprescribed by physicians, a practice that is contributing to the development of drug-resistant bacteria — what’s being called “the health crisis of our generation.”

Each year, at least 2 million people in the United States become infected with bacteria that are resistant to antibiotics, according to the Centers for Disease Control and Prevention.

And at least 23,000 people die annually as a direct result of these infections — a number that is expected to grow in the coming years.

Acute conjunctivitis — inflammation of the thin tissue (conjunctiva) that lines the inside of the eyelid and covers the white part of the eye — affects about 6 million people in the U.S. each year. Viruses are behind at least 60 percent of the cases, while many others are caused by allergic reactions to pollen, dust mites, mold or other substances. Neither of those forms of conjunctivitis responds to antibiotics.

Bacterial conjunctivitis, which is triggered by such bacteria as Staphylococcus aureus, Streptococcus pneumonia or Haemophilus, is much less common. Antibiotics can shorten the course of these infections, but, as Shekhawat and his colleagues explain in their study, even bacterial conjunctivitis usually clears up within one to two weeks without the use of antibiotics. 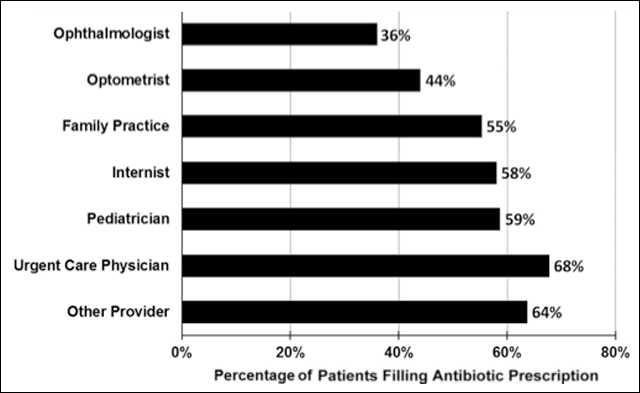 To determine if those guidelines are being followed, Shekhawat and his colleagues examined 14 years of data (2001-2014) from a large national managed care network. They found that about 340,000 patients in the network had been diagnosed with acute conjunctivitis during that period.

Of those patients, 58 percent had filled a prescription for antibiotic eyedrops within 14 days of their diagnosis. Twenty percent of those eyedrops also contained a steroid.

The antibiotic-steroid combination drug is considered inappropriate for most patients with acute conjunctivitis, Shekhawat and his colleagues point out. It can prolong the pink eye if a virus is the cause of the infection, and, if that virus is ocular herpes, the drug may actually worsen the infection.

“It may be easier for wealthier and more educated patients to pay the out-of-pocket costs for these medications,” they explain. “Likewise, more affluent and well-educated enrollees may be more inclined to pressure health care providers to prescribe these agents rather than use more conservative options.”

“These findings highlight the need to educate patients, clinicians, and health policy makers better about acute conjunctivitis and to search for ways to reduce unnecessary use of antibiotics for this condition,” the researchers conclude.

For more information: You can read the study on the website of the journal Ophthalmology. You’ll find some useful information about how you can ease the symptoms of acute conjunctivitis and prevent it from spreading on the Mayo Clinic’s website.

Most people with ‘pink eye’ are being wrongly prescribed antibiotics, study finds