More Americans are walking — both to get places and just for fun — than they were a decade ago, although that trend has not been happening at the same rate across all demographic groups, according to a report from the Centers for Disease Control and Prevention (CDC).

Women are walking more than they were in the past, but for men, that trend has stalled in recent years. And for both women and men, walking was least prevalent among blacks and people with less than a college education.

The report calls on communities to make walking a safe and convenient option for everybody.

A low-cost promoter of health

Walking is an easy and inexpensive way of getting 2½ hours of moderate-intensity aerobic activity per week — the minimum amount recommended by many health officials. That level of activity has been shown to help prevent high blood pressure, weight gain and other risk factors for chronic disease, and is associated with a lower risk of heart disease, stroke, type 2 diabetes, depression and certain cancers. It can also help people living with a chronic disease reduce their symptoms and improve their mobility.

But half of adults in the U.S. fail to meet even that modest weekly activity goal.

To evaluate walking trends among American adults, CDC officials analyzed data collected from the National Health Interview Survey in 2005, 2010 and 2015. The survey asked respondents many questions about their physical activity, including whether they had spent at least a 10-minute period during the previous seven days walking either for transportation (to get someplace) or for leisure (to have fun, to exercise, to relax or to walk the dog).

All except 1.6 percent of the increase in walking among the men, however, had occurred before 2010, whereas among women, the rise had been steady, with about half occurring before and half after 2010.

Midwestern women, however, were the exception. Their rate of walking increased from 60.4 percent in 2010 to 61.0 percent in 2015 — a meager 0.3 percent rise. By comparison, women in Northeastern states increased their walking rate by 4.7 percent during that period — to 70.4 percent. 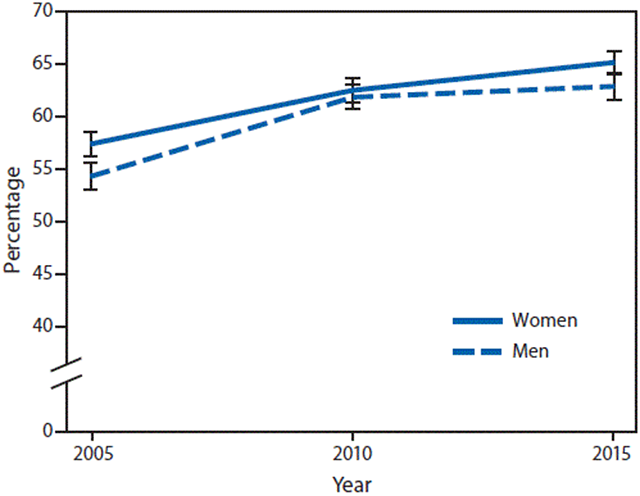 National Health Interview Survey, 2005–2015
The figure above is a line graph showing the percentage of U.S. women and men aged ≥18 years who reported recent walking for transportation or leisure during 2005–2015.

The analysis found other disparities in walking rates. Women, for example, were much less likely to walk if they were older, black or lived in the South. Walking was also much less prevalent among people without any college education.

Among men, those differences by education level appeared to widen over time. Between 2005 and 2015, walking rates steadily increased among men who were college graduates, but stalled among men who had not graduated from high school.

The report points out that neighborhoods where low-income people live are less amendable to walking, and are often perceived as less safe, than majority white neighborhoods.

“To promote walking, streets and communities can be designed so that walking is a safe and convenient option for all persons,” the CDC researchers conclude. “Communities can also implement walking programs that are tailored to the interests and abilities of specific population subgroups.”

“By implementing community and street scale design strategies that encourage pedestrian activity and by supporting walking programs where persons spend their time, communities can improve walkability and make walking a safer and easier option for increasing physical activity,” they add.

FMI: The report was published in the June 30 issue of the CDC’s Morbidity and Mortality Weekly Report, where it can be read in full. For ideas about how to make your neighborhood more walkable — and for stories about how other places have successfully done so around the country, go to the website for the Surgeon General’s “Step It Up” campaign, which was launched by the Obama administration in 2015 to help create more walkable communities.

A ‘prolonged tornado’: how north Minneapolis leaders are responding to the fallout from COVID-19